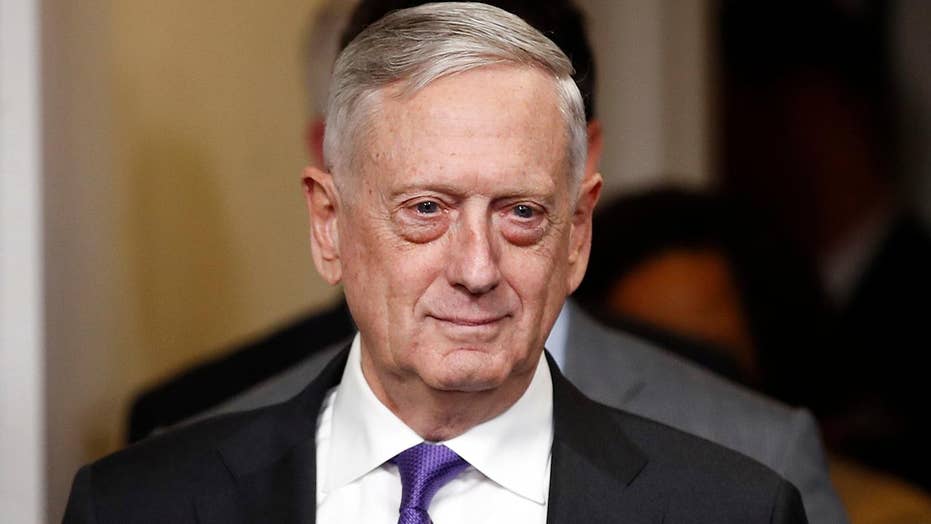 Defense Secretary Mattis: Fight is not over against ISIS

Defense Secretary Mattis is in Rome plotting the further destruction of what's left of the Islamic State; David Lee Miller reports from Jerusalem.

Defense Secretary James Mattis, breaking with President Trump, has formally recommended that transgender troops be allowed to serve in the U.S. military provided they can deploy overseas.

A senior U.S. official confirmed to Fox News that Mattis made the recommendation to Trump on Friday.

The official announcement about transgender policy is expected from the White House no later than March 23, according to officials.

Over the summer, the Pentagon was caught by surprise when the president tweeted that transgender people were no longer welcome in the military “in any capacity.”

The order was later blocked in federal court. A separate official said Mattis’ recommendation would not violate those recent orders that declared Trump’s ban on transgender people serving in the military unlawful.

The focus on being able to deploy is part of a broader push.

Mattis recently issued a new policy saying if any servicemember was unable to deploy with his or her unit for more than 12 months, excluding the combat wounded, that person would be kicked out of the military.

“We've come out with a policy that if you're not deployable for a year or more you're going to have to go somewhere else,” Mattis told reporters recently.

Officials told Fox News that it’s this new policy for non-deployable troops and the recent court orders that have shaped the secretary’s thinking about transgender people serving in the military.

In addition, the chairman of the Joint Chiefs of Staff had raised concerns about kicking out transgender troops who were already serving honorably.

The defense secretary’s new deployment policy makes it unlikely the Pentagon would continue paying for sex reassignment surgery since the recovery time is often longer than a year.