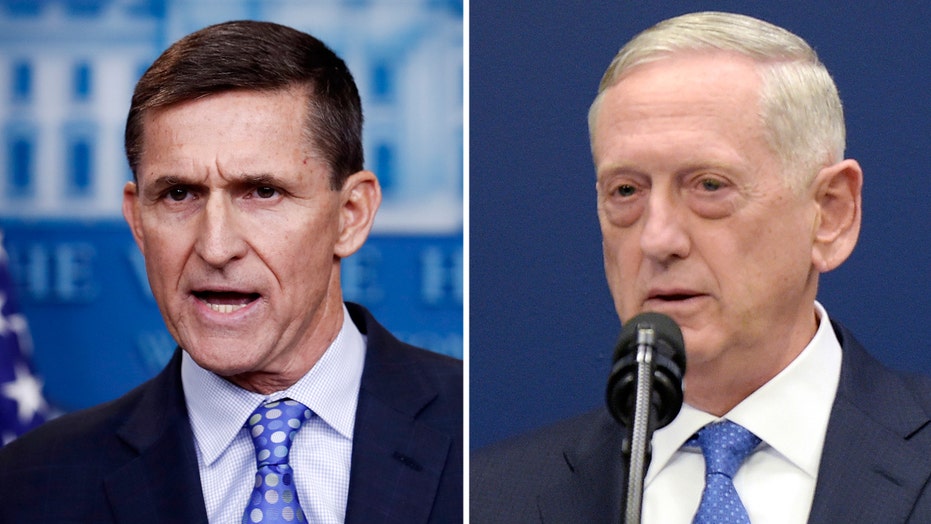 But despite the political firestorm back in Washington over Flynn’s departure, the defense secretary downplayed the impact the changes to Trump’s security team would have with regard to the meeting of NATO allies at its headquarters this week.

"Frankly this has no impact," Mattis told reporters traveling with him. "Obviously, I haven't changed my message at all, and who's on the president's staff is who I will work with. And so it's full-speed ahead."

The comments were his first public remarks since Flynn's departure and were made en route to his first meeting with NATO allies in Europe. Mattis spoke onboard the E4B, also known as the Doomsday plane for its ability to communicate and remain airborne in the event of a nuclear war. Fox News is traveling with the secretary to the NATO meeting.

Reaction to Flynn's departure was immediate from Capitol Hill and elsewhere. Rep. Devin Nunes, the Republican head of the House Select Intelligence Committee, praised Flynn for his years of service.

"Washington, D.C., can be a rough town for honorable people, and Flynn -- who has always been a soldier, not a politician -- deserves America's thanks," Nunes said in a statement.

Democrat Adam Schiff, the ranking member of the House intelligence committee, took a different stance: "Flynn was always a poor choice for National Security Advisor, a role in which you need to be a consensus builder, and possess sobriety and steady judgment. It is certainly no role for someone who plays fast and loose with the truth."

The committee is still investigating Flynn and other Trump team members' contacts with the Kremlin before the election.

The Justice Department warned the White House that Flynn may be vulnerable to blackmail from the Russians in the wake of his conversations with Russia's ambassador and Vice President Pence's denial that the two had discussed sanctions. Flynn resigned after it emerged that he apparently gave Pence inaccurate information about his discussions with the Russian diplomat.

Before leaving, Mattis was at the White House the morning of the Canadian prime minister's visit Monday. Trump consulted with his defense secretary before Flynn's resignation.

In what was originally slated as a listening tour, Mattis will have the added challenge now to reassure NATO allies that Washington's national security leadership is stable as the allies coordinate their message to an increasingly aggressive Russia.

"2014 was a watershed war," Mattis said, referring to Russia's annexation of Crimea. "It was a year when many of our hopes for some kind of partnership with Russia were finally shown to be unavailing. So what we have got to do, we've got to adapt and make certain that the transatlantic bond remains strong."

The turmoil at the top of Trump's national security Team puts Mattis firmly in the spotlight, which he had hoped to avoid, as he steps forward to reassure NATO allies.