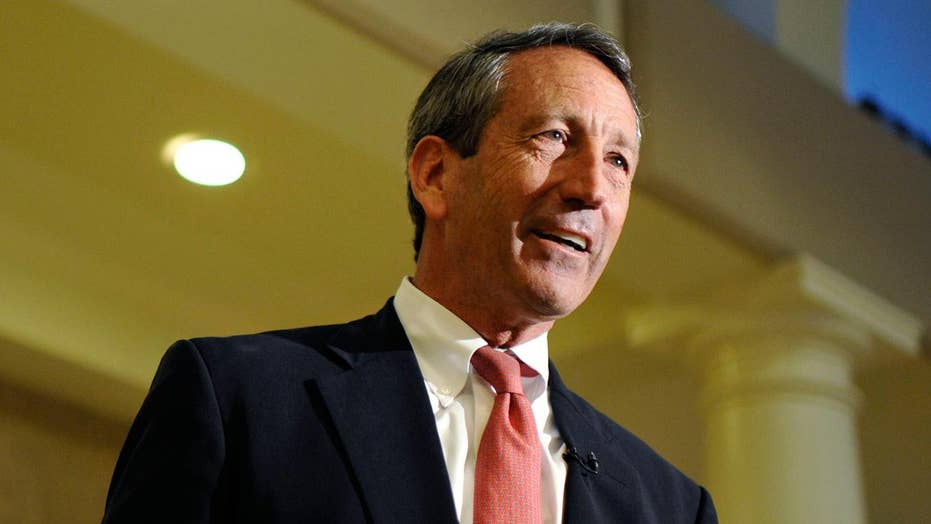 Former South Carolina governor and congressman Mark Sanford could decide whether to become the third Republican to announce a long-shot primary challenge to President Trump by Labor Day. Sanford is flocking to early key states like Iowa and New Hampshire to test the waters before potentially joining former Massachusetts Gov. Bill Weld and conservative radio talk show host and former congressman, Joe Walsh, in facing off against the president.

DES MOINES, Iowa – Former South Carolina Gov. and congressman Mark Sanford spent the last few days in closed-door meetings with political operatives around Iowa. Earlier this month, he visited the first-in-the-nation primary state of New Hampshire and was met with a chilly reception from attendees at a pro-Trump event in South Carolina that was also attended by Vice President Pence.

Sanford says he recognizes the huge hurdles ahead.

“The mechanics … are absolutely daunting. It would be something of a David and Goliath story. I mean it's impossible at many different levels. It'd be a very steep climb. But you know that going in,” Sanford said in an interview with Fox News.

If he chooses to run, Sanford will join conservative radio talk show host and former Rep. Joe Walsh, a one-term Tea Party lawmaker who has a history of making racist comments, and former Massachusetts Gov. Bill Weld, who ran for vice president in 2016 on the Libertarian ticket. (Fox News)

He first announced in mid-July that he was considering a 2020 campaign and said he would decide around Labor Day. Sanford confirmed with Fox News that a decision is coming soon.

“I’m still on track -- a few days before, a few days after, but it's time," Sanford said. "I wanted to be very deliberate."

The president is aware of the potential challenge. He took aim at the three Republicans -- Walsh, Weld and Sanford -- in a tweet on Tuesday.

"Can you believe it? I’m at 94% approval in the Republican Party, and have Three Stooges running against me," the president tweeted. "One is 'Mr. Appalachian Trail' who was actually in Argentina for bad reasons.” That referred to Sanford’s original excuse for a weeklong disappearance in June 2009 which was later revealed to be an extramarital affair with an Argentinian woman.

Trump ended his tweetstorm with this: "I should be able to take them!"

A recent Fox News poll shows that Trump has 88 percent support among Republicans – leaving many to wonder why the three are even considering a run.

“The gentlemen who are running or considering running against him in a primary surely know that they don't stand a chance of beating him in a primary…It's hard to believe, as grueling and as exhausting and as expensive a process this is, that these people run on a lark,” said Drake University political science professor Dennis Goldford.

“I'm sure he [Trump] and his campaign don't think that the challengers or potential challengers thus far really do constitute a threat...But at the same time, my sense is that he will want to try immediately just to squash any kind of challenge at all, because the challenge doesn't look good.”

Reactions to the challengers vary widely among conservatives in the Hawkeye State, some of whom see the president’s rivals as a necessary option in the current political climate.

“There is some discontent. Not a lot, but some significant discontent in Republican ranks with the president. Some of it is articulated and some of it is quiet because they don't want to attract attacks from Trump supporters,” said Goldford. “If there are Republicans who don't really want to go to the Democrats and…don't want to just sit home. This gives them a way of challenging the president without…voting for a Democrat.”

"I have heard about the opponents to Trump, but I'm not familiar with them yet. I’d love to know more about who's out there,” said B.J. Towe, a Republican voter. “I think that President Trump has done what he said he would do, however, the way in which he does it is difficult for me. I think that he could use a little more diplomacy.”

Bud Hockenberg, a Republican who voted for Trump in 2016, offered this analysis: "I think their goal is to get notoriety and write a book. The Himalayas are a foothill compared to the challenge they have.”

In an interview with Fox News, Sanford insisted a run wouldn't be revenge against Trump, who tweeted support for Sanford's primary opponent, Katie Arrington, just hours before the polls closed in his primary for a South Carolina congressional seat last year. Instead, Sanford said, the goal would be to foster a debate in the Republican Party about government spending and the growing federal deficit. (Fox News/Allie Raffa)

Sanford, a proud deficit hawk, is aiming to make excess federal spending and a ballooning national debt a debate issue in the presidential campaign, saying the economy is “more vulnerable than it's ever been” and that there is a “looming crisis."

The president’s reelection campaign is already on the ground in Iowa and several other states, getting commitments from future Republican National Convention floor delegates. This likely makes it nearly impossible to muster enough money and a ground game for a campaign to survive.

And the national party is making it clear that it's not embracing the challenges.

In a statement to Fox News about Sanford, Republican National Committee spokesperson Preya Samsundar said: “He’s a failed congressman, failed governor, and he’s more than welcome to fail at this, too."

"Iowa Republicans continue to support President Trump and his America First policies. It’s clear that their campaigns are nonstarters.”

Sanford and the other challengers say there should be Republican primary debates and are calling for Trump to participate. He has also committed to supporting the president should he win the Republican nomination.