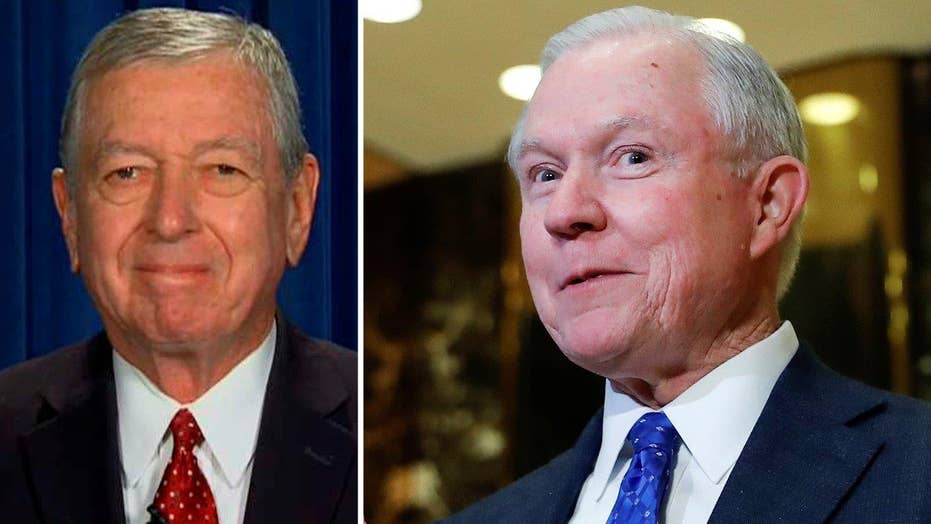 Ashcroft: Jeff Sessions will restore the rule of law

Earlier this month, a small group of marijuana legalization activists snuck cannabis past U.S. Capitol Police and into the office of Alabama Sen. Jeff Sessions, the man who could soon enforce national drug laws as President-elect Donald Trump’s nominee to be attorney general.

Sessions was not in his office Dec. 8 as the advocates asked Sessions’ staffers that their boss stand against marijuana prohibition and not, as D.C. Cannabis Campaign organizer Adam Eidinger put it, “break down people’s doors as a federal policy,” according to U.S. News & World Report. Eidinger’s comments echoed those of Jag Davies, the communications director for the Drug Policy Alliance, who called Sessions “a drug war extremist with a career-long history of racist comments and actions.”

But Sessions’ supporters argue his Justice Department policy on drugs wouldn’t look much different from that of current Attorney General Loretta Lynch.

Sessions has not yet officially outlined what his policy toward states that have legalized marijuana might be, as his office is not speaking with reporters in advance of his confirmation hearing. So far, only a Justice Department memo has restrained the federal government from pursuing prosecutions in states that legalize marijuana. California, Nevada, Massachusetts and Maine recently approved the recreational use of marijuana, joining Alaska, Colorado, Oregon and Washington; but federal law supersedes state law.

But Sessions’ future boss, Trump, has signaled – though warily – he may view the legalization battle as more of a states’ rights issue than a fight for the federal government to jump in to.

Some have pointed to Sessions’ remark from an April Senate Judiciary hearing that “good people don’t smoke marijuana” as a signal Sessions won’t be a proponent of what Davies calls “sensible drug policies.” But Sessions made the remark in the context of preferable “societal rhetoric” – and rhetoric many Obama officials agree with.

“I think the evidence is pretty clear that early use of alcohol, tobacco and marijuana – often used together – significantly increases the probability that someone will develop a more significant addictive disorder later in their life,” White House drug czar Michael Botticelli said during a House Oversight hearing in March.

And some of those with a more personal stake in the war on drugs have already lined up behind Sessions. Ex-HP CEO Carly Fiorina, a former Republican primary rival of Trump’s who was recently interviewed by Trump for a possible cabinet posting, issued a statement of support on Saturday.

“My husband Frank and I lost a child to the demons of addiction – as have countless parents across our country – and Senator Sessions understands we can and must do more to support states that are taking an active role to combat this plague,” Fiorina said.