The controversy surrounding Republican U.S. Senator Marco Rubio's remarks about when his family emigrated from Cuba has had virtually zero effect on his approval ratings, according to a new Quinnipiac University poll.

Forty nine percent of Floridians surveyed say they approve of Rubio's job performance as senator, while 29 percent disapprove -- the same as previous polls, with a slight dip in his disapproval ratings.

Florida Latinos, a key voter demographic in the fourth most populous state in the country, also approve of the Cuban-American's job performance, with 52 percent saying they like the way he is "handling his job."

The Washington Post claimed that Rubio did this in part because, as a candidate, he thought being "connected to the post-revolution exile community gives a politician cachet that could never be achieved by someone identified with the pre-Castro exodus, a group sometimes viewed with suspicion.”

Rubio has adamantly denied the allegations. In an op-ed column for Politico.com he wrote: “If The Washington Post wants to criticize me for getting a few dates wrong, I accept that. But to call into question the central and defining event of my parents' young lives - the fact that a brutal communist dictator took control of their homeland and they were never able to return - is something I will not tolerate."

Rubio has been discussed as a potential vice presidential pick for the eventual 2012 Republican nominee because of his conservative credentials, his Hispanic heritage, and his popularity in Florida – a key swing state in next year's presidential election.

The poll found that would-be voters agree he would be asset on the ticket – 46 percent said they would vote for a nominee that chooses Rubio as their No 2, as opposed to 41 percent who would pick a Obama-Biden ticket. 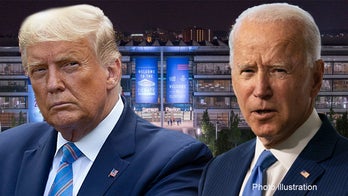