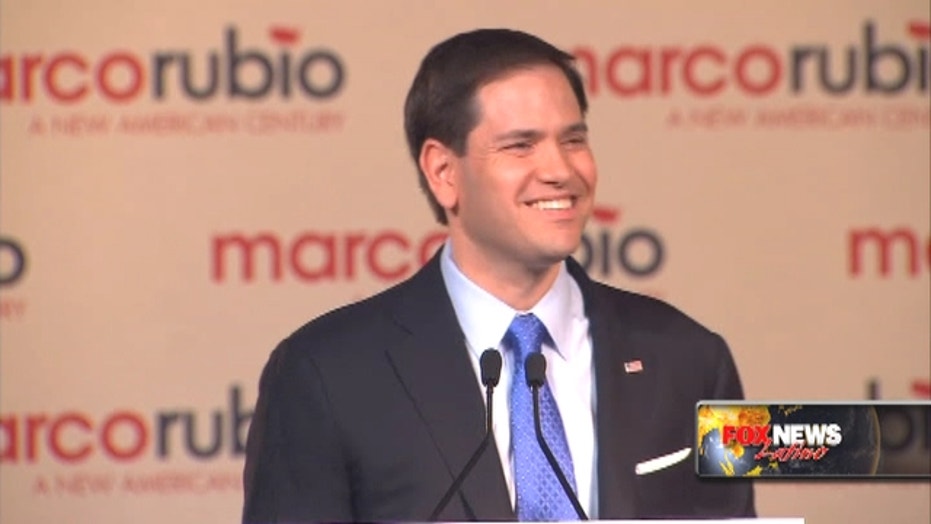 Weeks after he launched his presidential campaign, Sen. Marco Rubio continues to come out on top in polls of likely Republican voters.

Four weeks after he launched his presidential campaign, Sen. Marco Rubio continues to come out on top in polls of likely Republican voters, and among political observers rating the electability of GOP contenders.

The Hill, an influential Washington D.C. political news outlet, put the Florida lawmaker at No. 1 in a list of the Republicans “most likely to claim the nomination next year.”

It cited Rubio’s dominance in multiple polls of GOP voters and their views of both declared and as-yet-undeclared presidential candidates, and his repeated ability to stun skeptics.

One of the more recent polls, The Hill said, is a CBS News/New York Times one that showed Rubio besting his GOP rivals by a large margin. Nearly 50 percent of GOP voters said in the survey that they could see themselves voting for Rubio, compared to only 17 percent who said they absolutely could not.

Analysts say Rubio’s frequent dominance in such polls shows that his embrace in 2013 of a comprehensive immigration reform measure that included allowing undocumented immigrants a chance to legalize is not dooming him among Republican voters, despite some backlash he received from conservative groups.

His popularity at the moment also diminishes the notion that many political observers have pushed that Rubio would not be able to gain momentum as a candidate with his one-time mentor, former Florida Gov. Jeb Bush, potentially running for president as well.

“Those who felt that he would struggle to escape the shadow of his mentor and fellow-Floridian, former Gov. Jeb Bush, also appear to have underestimated him,” The Hill said. “The contours of Rubio’s case are clear: a candidate with a compelling story who could appeal to groups with which the GOP has struggled in recent years.”

But Bush could keep the Rubio campaign up at night if he announces, and voters and supporters who have not lined up behind the former governor then feel more comfortable doing so for a sure candidate.

The brother of a U.S. president and son of another, Jeb Bush has had his bumps in voter favorability rankings.

“His status is cloudier now, though a combination of his name, family network and prodigious fundraising ability guarantees him a place in the top tier,” The Hill noted.

But for now, it seems that it won’t be a cakewalk.

Other candidates likely will cast him, as they have former Secretary of State Hillary Clinton, as a continuation of a former administration, and a step backward.

"Yesterday is over. And we are never going back," Rubio said when he launched his campaign in April in Miami. "Before us now is the opportunity to author the greatest chapter yet in the amazing story of America. We can’t do that by going back to the leaders and ideas of the past."

But Bush has plenty of supporters waiting to jump on the bandwagon if he announces that he is running.

The Hill pointed out that Right to Rise, the main super-PAC supporting Bush, could have $100 million war chest by the end of May.

Others on the list included Wisconsin Gov. Scott Walker, at No. 3, and Sen. Ted Cruz of Texas at No. 6.

The Hill said that Cruz would need his Tea Party supporters and his network of wealthy donors to stick by him.

“Doubts about his electability in a general election could prove a millstone for Cruz, however,” The Hill said.