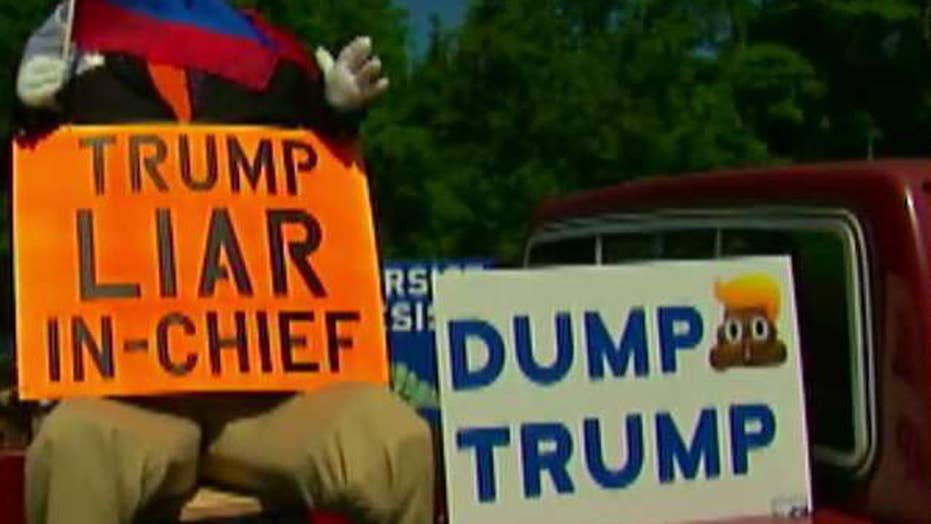 'March for Truth' rallies call for answers on Russia, Trump

Garrett Tenney reports on demonstrations being held across the country

Protesters rallied Saturday in nearly 130 U.S. cities to call for what they consider the need for more thorough federal investigations into whether President Trump’s associates colluded with Russia during the 2016 presidential elections.

The rally in Washington on the National Mall was held within blocks of a pro-Trump rally outside of the White House.

The sides reportedly clashed briefly at the pro-Trump “Pittsburgh Not Paris” rally, but no major incidents so far have been reported.

"I was elected to represent the citizens of Pittsburgh, not Paris,” Trump said Thursday in announcing that the United States would withdraw from the 2015 Paris Climate Agreement, in which industrial nations have agreed to limit greenhouses gases. “It is time to put Youngstown, Ohio; Detroit, Michigan and Pittsburgh, Pennsylvania ... before Paris, France.”

Organizers for the "March for Truth" rallies Saturday said their objective was to “let our elected leaders know that Americans want answers.”

And they suggested the nationwide rallies are not part of the so-called “resist” Trump efforts, saying, “The legitimacy of our democracy is more important than the interests of any party, or any president."

However, they also said their primary goals include getting an independent commission established for the Russia investigations, keeping the public as informed as possible and getting Congress to demand that Trump release his tax returns.

And sponsors included such liberal-leaning groups as Swing Left, Progressive Democrats of America and the National Organization for Women.

“Eventually, you wake up with a knot in your gut about what the president might do or say,” John Lovett, who was a speechwriter for former President Barack Obama, said at the Washington, D.C., rally. “We can take back the White House.”

NOW President Terry O’Neill told protestors: “The Trump administration is going after immigrants, and we won’t stand for it. I am up against implacable efforts to stop women from having access to health care.”

Trump protestors and supporters have clashed and disrupted each other’s events numerous times since essentially the start of the 2016 presidential election cycle.

In March 2016, protests and scuffles forced the cancellation of a Trump rally at the University of Illinois at Chicago.