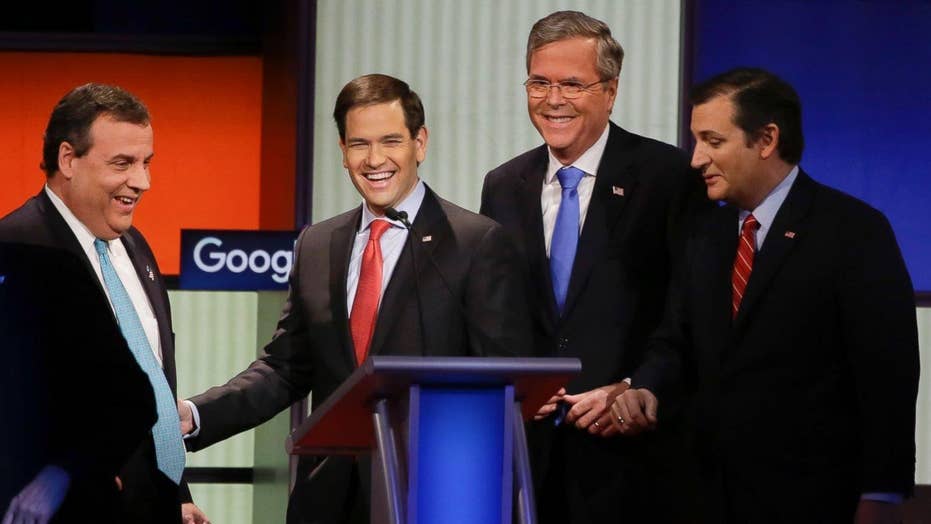 Crunch time for candidates in Iowa

I watched with fascination here in Iowa as a dozen people explained why they had switched candidates in the past 48 hours—and some still hadn’t made up their minds a day before the caucuses.

Melissa Murphy told me she was a Ted Cruz supporter until the debate, when she saw him try to explain away his conflicting videotaped comments on “amnesty,” as she put it. “When Megyn pushed him on it, he really tried to parse her words. When you’re lying, it becomes about you, not the country.”

The mother of two told me she moved to Marco Rubio after asking him at a rally about the seeing so much terrorism and violence on television—and his reassuring response was very “personal...He has kids, he mentioned his own family.”

What’s striking, as the Frank Luntz focus group talked about struggling to reach a decision, is what breaks through. Three sided with Donald Trump because they didn’t like Fox’s sarcastic response to his skipping the debate. One man said he views Trump as a sexist who disrespects women. Another said his brother is in the military and loves Trump. Other Iowans told me they still like Carly Fiorina. They were smart, informed and up for grabs.

But as the clock ticks down toward tonight’s caucuses, the expectations game is furiously under way.

It’s like the stock market: No matter what earnings a company reports, if it doesn’t match Wall Street’s expectations, the stock will take a beating. And that’s the risk for candidates who underperform what the media are expecting them to do.

Thus we had Cruz telling Neil Cavuto that no, he doesn’t have to win the Iowa caucuses. Except he knows, and the audience knows, that this is his best shot at slowing down the Trump freight train.

Don’t take my word for it. The Texas senator told a group of pastors that if Trump won Iowa he would probably win New Hampshire, where the billionaire has a big lead, and then could be “unstoppable.”

Still, Cruz has to preserve his options in case he loses the caucuses by a couple of points.

Rubio declared over the weekend that Cruz is “the front-runner, going into tomorrow night he has 10,000 volunteers on the ground. We know it’s a tough hill to climb.”

Rubio hasn’t played all that hard here in the Hawkeye State, but his numbers have been improving. If the media pronounce Rubio to have had a “strong” third-place finish, that could help him in New Hampshire, a more crucial state for him. If he is said to have a weak finish, the Florida senator will lose that elusive sense of momentum.

Sounds like gamesmanship, but these things matter in terms of donors, political excitement and media coverage. With the Des Moines Register/Bloomberg poll giving Trump a 5-point lead over Cruz and a 13-point edge over Rubio.

On the Democratic side, the poll gives Hillary Clinton a mere 3-point margin over Bernie Sanders. The Hillary camp is worried enough about a double knockout in the first two states that the Washington Post was given a preemptive spin, complete with comments from campaign manager Robby Mook:

“Despite her immediate hurdles in the Iowa caucuses and New Hampshire primary, Hillary Clinton has been quietly expanding her political networks in states that come later on the presidential calendar, confident that she can deny insurgent Bernie Sanders the Democratic nomination by swamping him in a state-by-state delegate slog.”

Such efforts may feel transparent, but every campaign tries to avoid the “worse-than-expected” label.

As for “better than expected,” keep in mind that Bill Clinton declared himself the Comeback Kid after finishing second in New Hampshire in 1992. Gary Hart won just 16 percent of the vote against Walter Mondale in Iowa in 1984, but that was so surprising that the slingshot effect carried him to victory in New Hampshire.

A month ago, Cruz was considered the hot candidate as he shot up from the middle of the pack. Had he continued a slow climb and then finished a couple of percentage points behind Trump in Iowa, all the headlines would have been positive.

But once Cruz briefly overtook Trump in the Iowa polls, most of the media expected him to win a state with a large slice of evangelical voters. Now, however, even a narrow loss will be portrayed as a setback.

But after listening to Iowa voters, I now believe that expectations could still be scrambled.