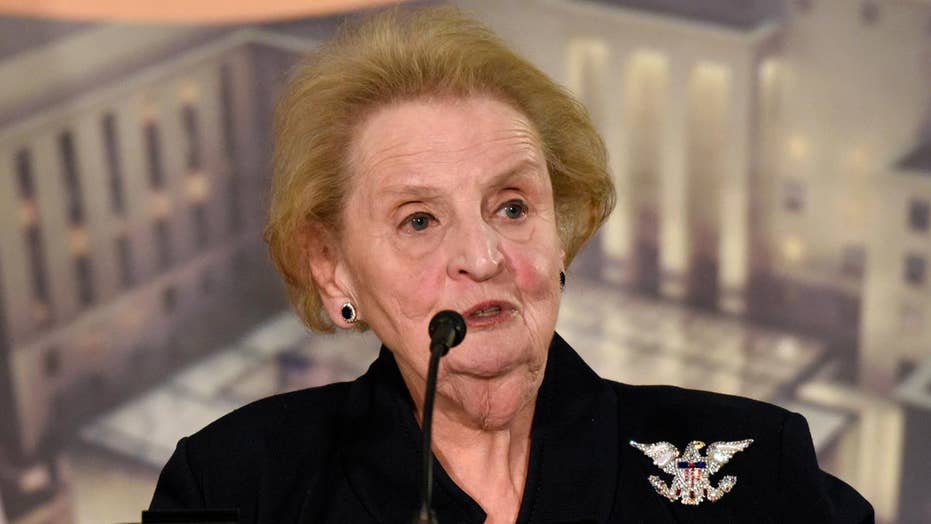 Albright: I stand ready to register as Muslim in solidarity

Madeleine Albright the former secretary of state, tweeted Wednesday that she is prepared to register as a Muslim in ‘solidarity’ as reports say President Trump plans on suspending the U.S.'s refugee program for 120 days.

Albright said that there is no fine print on the Statue of Liberty and America must "remain open to people of all faiths & backgrounds."

She went on to say that she was raised Catholic, became Episcopalian and “found out later my family was Jewish.”

I was raised Catholic, became Episcopalian & found out later my family was Jewish. I stand ready to register as Muslim in #solidarity.

“I stand ready to register as Muslim in #solidarity,” she tweeted. The Hill reported that she is following in feminist icon Gloria Steinem’s vow to become Muslim if there is ever a registry.

Albright was a vocal critic of Trump in the election and lended her support to Hillary Clinton. She made headlines last year when, at a rally in New Hampshire, she said there's a special "place in hell for women who don't help each other."

She later clarified those remarks and called it an "undiplomatic moment."

There is no fine print on the Statue of Liberty. America must remain open to people of all faiths & backgrounds. #RefugeesWelcome pic.twitter.com/4LvMiZTRJJ

He also plans to suspend issuing visas for people from Iran, Iraq, Libya, Somalia, Sudan, Syria or Yemen for at least 30 days, according to the draft. All are predominantly Muslim countries.

Trump is expected to sign the order this week.

The order says the government will give countries 60 days to start providing the information or citizens from those countries will be barred from traveling to the United States.

Exceptions would be made for diplomats, NATO visas or those people traveling to work at the United Nations.

During the campaign Trump, said vetting procedures were inadequate and suggested that terrorists could pose as Syrian refugees to infiltrate the United States.

Trump has the authority to determine how many refugees are accepted annually and he can suspend the program at any time. Refugee processing was suspended in the immediate aftermath of the Sept. 11 attacks, restarting months later.

During the last budget year, the U.S. accepted 84,995 refugees, including 12,587 people from Syria and President Barack Obama had set the refugee limit for this budget year at 110,000.

Trump, according to his yet-to-be-signed executive order, will cut that program by more half to 50,000.

The order said while the program is suspended, the U.S. may admit people on a case-by-case basis "when in the national interest" and the government would continue to process refugee requests from people claiming religious persecution, "provided that the religion....is a minority religion in the individual's country."

That suggests that would allow the admission of Christians from Muslim-majority countries.