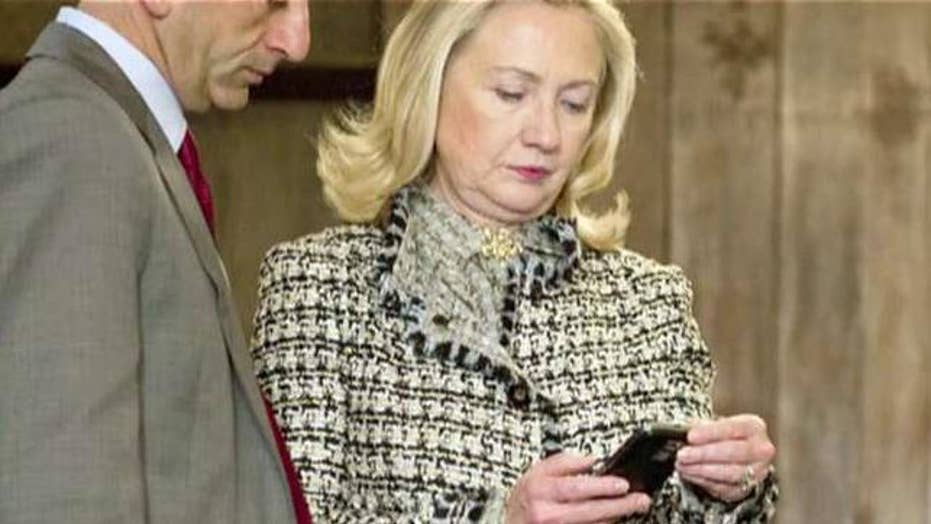 Will there be charges? Judge Andrew Napolitano weighs in on 'America's Newsroom'

Attorney General Loretta Lynch confirmed to Congress Wednesday that career Justice Department attorneys are working with FBI agents on the criminal investigation of Hillary Clinton’s email practices and the handling of classified material.

Legal experts say the assignment of career Justice Department attorneys to the case shows the FBI probe has progressed beyond the initial referral, or "matured," giving agents access to the U.S. government’s full investigative tool box, including subpoena power for individuals, business or phone records, as well as witnesses.

The Associated Press reported earlier this month that career lawyers were involved, but Lynch's comments are the most expansive to Congress.

"If the FBI makes the case that Hillary Clinton mishandled classified information and put America's security at risk, will you prosecute the case?” Republican Congressman John Carter asked Lynch during a budget hearing.

"Do you know of any efforts underway to undermine the FBI's investigation? And please look the American people in the eye and tell us what your position is as you are the chief prosecutor of the United States," Carter pressed.

Lynch replied, "...that matter is being handled by career independent law enforcement agents, FBI agents as well as the career independent attorneys in the Department of Justice. They follow the evidence, they look at the law and they'll make a recommendation to me when the time is appropriate,"

She confirmed that the FBI criminal investigation is ongoing, and no recommendation or referral on possible charges had been made to her.

"I am not able to comment about the specific investigation at this time. But what I will say is again that this will be conducted as every other case. And we will review all the facts and all the evidence and come to an independent conclusion as to how to best handle it. And I'm also aware of no efforts to undermine our review or investigation into this matter at all."

The White House has been criticized for its public comments, including those of President Obama, that the transmission of classified information on Clinton's unsecured, personal server did not jeopardize national security.

Last month, White House spokesman Josh Earnest said Clinton was not the target of the FBI probe, and it was not "trending" towards Clinton.

During congressional testimony in December, FBI Director James Comey was asked by Republican Senator John Cornyn of Texas, “Does the President get briefings on ongoing investigations by the FBI like this?” Comey replied, “No.”

National Security Defense attorney Edward MacMahon, who routinely handles classified information as part of his case work, said "Lynch appears to be sending a message that there is no need for a special prosecutor because she has assigned career Justice Department lawyers, and not political appointees, to work with FBI agents on the Clinton matter."

MacMahon who recently represented CIA officer Jeffrey Sterling, who was convicted of leaking intelligence to a New York Times reporter and is now serving a three- and-a-half-year prison sentence, said the pairing of FBI agents and Justice Department attorneys generally reflects the fact that the investigation has moved beyond an initial inquiry.

“As a general matter, a U.S. attorney is assigned as an FBI investigation progresses. The partnership with the U.S. attorney allows the FBI to use the investigation tools of the U.S. government, including subpoenas for evidence, business or phone records, as well as witnesses. And you need (a) U.S. attorney to convene a grand jury.”

It is not publicly known whether any of those actions have been taken.  But an intelligence source close to the FBI probe said the career professionals at the bureau "will be angry and walk off if no indictment recommendation is followed through."

At least 1,730 Clinton emails contain classified information, and the rest held by the State Department must be released by the end of the month based on a federal court imposed timetable.

One of the newly declassified 2012 emails sent four days after the Benghazi terrorist attack, includes highly sensitive information about the evacuation of Americans from Tunisia.

The email included a rare redaction for intelligence called the B 1.4 (g) exception which pertains to “vulnerabilities or capabilities” to “national security including defense against transnational terrorism.”

The email chain was forwarded, on Sept. 16, 2012 at 8:12 a.m, from Clinton chief of staff Cheryl Mills' government account to Clinton’s unsecured personal server. One of the emails early in the chain was sent by Denis McDonough, then Deputy National Security adviser. His address is redacted citing “unwarranted invasion of personal privacy” and could also be a private account because other government accounts on the email chain are not redacted.