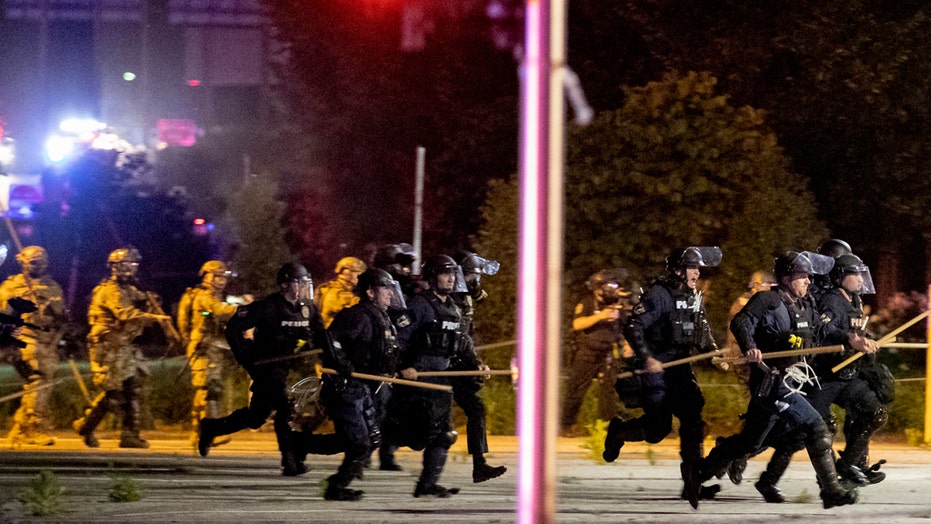 Dozens of police officers in Louisville, Ky. reportedly walked out on the city's Democratic mayor, Greg Fischer, as a form of protest, as the Fraternal Order of Police president explained that the officers felt “disrespected” as they struggle to keep the peace after more than a week of fiery protests.

Video obtained by the Courier-Journal shows Fischer standing in the middle of the room at a roll call before the start of a 12-hour shift, as streams of Louisville Metro Police Department (LMPD) officers and detectives silently file out.

FOP President Ryan Nichols, who was not present, said the move was an unplanned reaction to Fischer’s address.

"They feel completely unsupported and disrespected by this administration," Nichols said. "They feel whatever he was going to say would have been nothing more than lip service, and he does not care about them at all."

Tensions between protesters and police have reached a high in the city where Breonna Taylor, an unarmed black woman, was shot and killed in her home on March 13.

Police have deployed pepper bullets and tear gas to disperse demonstrations. They say it was in response to protesters throwing bricks, fireworks, leaf blowers and Molotov cocktails at them.

One man, David McAtee, was killed by police as a result of the unrest, though officers released a video they say proves he fired the first shot. At least seven were shot in one night of protests in Louisville last week.

Maj. David Allen, who oversees LMPD's Administrative Services Division, said Tuesday that some rioters had thrown jars with "gasoline in them, urine (and) a mixture with vomit in it" at officers. On Wednesday, interim Chief Robert Schroeder said a SWAT vehicle had taken fire during overnight protests.

Many officers, Nichols said, don't feel Fischer's team has been supporting law enforcement amid protests that have been "directed and focused against police."

"We're deep into multiple days of rioting and violence ... and they're working in treacherous conditions," Nichols said. "And this is the first opportunity that the leader of our city and this police department has given them to address them?"

The mayor responded in a statement following the walkout: “The men and women of LMPD are putting in long hours. They are suffering insults and assaults from people they are working to protect. They are worried for their families and this city."

“They are frustrated, and some of them expressed that frustration today. I absolutely respect that. That doesn’t change my appreciation of the work they are doing, as I’ve expressed time and again. They have a very difficult job. I hope our residents will embrace our police officers as guardians –I know that’s how the vast, vast majority view their role,” Fischer added.