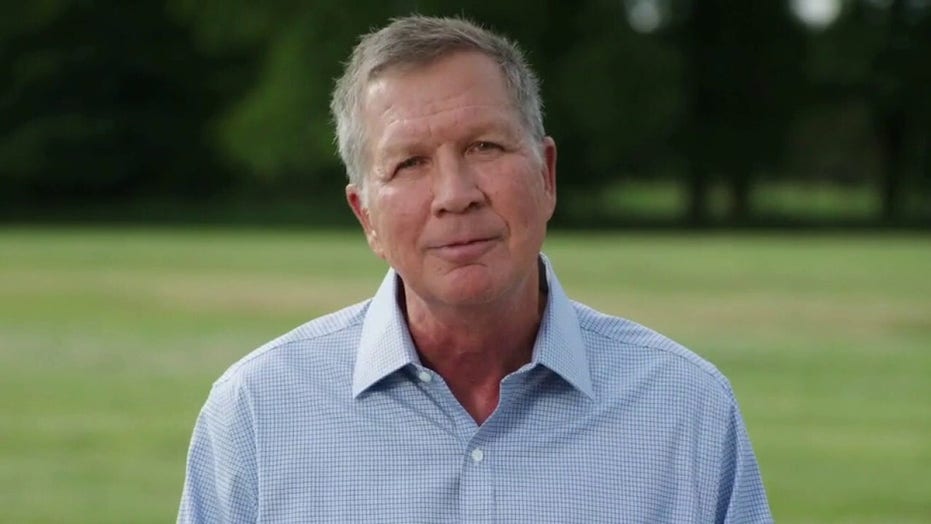 John Kasich says America is at a crossroads

Former Ohio Gov. John Kasich -- one of President Trump’s most vocal Republican critics -- took aim at the president during a speech on the first night of the Democratic National Convention and urged other Republicans to join him in voting for the Democratic ticket in November.

Kasich - a Trump rival during the 2016 GOP presidential primaries who never endosed his party's eventual nominee - on Monday offered his support to presumptive Democratic presidenital nominee Joe Biden and called on fellow Republicans "to take off our partisan hats and put our nation first for ourselves and of course for our children."

Criticizing the president, Kasich argued that "many of us have been deeply concerned about the current path we’ve been following for the past four years. It’s a path that’s led to division, disfunction, irresponsibility and growing vitriol between our citizens. Continuing to follow that path will have terrible consequences for America’s soul because we’re being taken down the wrong road by a president who has pitted one against the other."

Kasich emphasized that “I’m a lifelong Republican, but that attachment holds second place to my responsibility to my country. That’s why I’ve chosen to appear at this convention."

He noted that "in normal times, something like this would probably never happen, but these are not normal times. I’m proud of my Republican heritage. It’s the party of Lincoln, who reflected its founding principles of unity and a higher purpose. But what I have witnessed these past four years belies those principals”

Kasich acknowledged that "there are areas where Joe and I absolutely disagree. But that’s OK because that’s America. Because whatever our differences, we respect one another as human beings, each of us searching for justice and for purpose.”

And pushing back against comments by the president hours earlier that Biden would be a "trojan horse for socialism," Kasich emphasized "I don’t believe that because I now the measure of the man is reasonable, faithful, respectful. And you know, no one pushes Joe Biden around."

Before Kasich's speech, Trump slammed his one time rival.

"John was a loser as a Republican. Never even came close," the preisdent told reporters onboard Air Force One as Trump flew back to the nation's capital after campaign stops Monday in the general election battle ground states of Minnesota and Wisconsin.

"He hasn’t done too well with Trump. He’s been easy pickings," the president added.

Kasich was anything but a loser in elective politics until his White House run.

He won an Ohio state senate seat as a 26-year old first time as a candidate, in 1978.  Four years late he ousted an incumbent Democrat in winning election to the House of Representatives. He was easily re-elected 8 times.

But in the 2016 GOP presidential primaries, Kasich only won his home state of Ohio.

Kasich wasn't the only former Republican governor to speak on the first night of the Democratic convention.

“I’m a lifelong Republican” noted former New Jersey Gov. Christine Todd Whitman. In her brief comments that aired during the convention, she called Biden “a person decent enough, stable enough, strong enough to get our economy back on track. A person who can work with everyone, Democrats and Republicans to get things done."

Former Rep. Susan Molinari of New York, who gave a keynote address at the 1996 Republican convention, also spoke at the confab. She called Biden "a really good man and he’s exactly what this nation needs at this time."

And 2010 California GOP nominee Meg Whitman - a former Hewlett Packard CEO and current CEO of Quibi, a streaming platform that generates content for mobile devices - argued that “Donald Trump has no clue how to run a business, let alone an economy. Joe Biden, on the other hand, has a plan that will strengthen our economy for working people and small business owners."

The Trump campaign - pointing to all four Republican speakers - called them  "nothing but useful idiots for the radical left. They would have gladly turned over our country to Crooked Hillary, and they’re still supporting the far-left Democrat agenda."