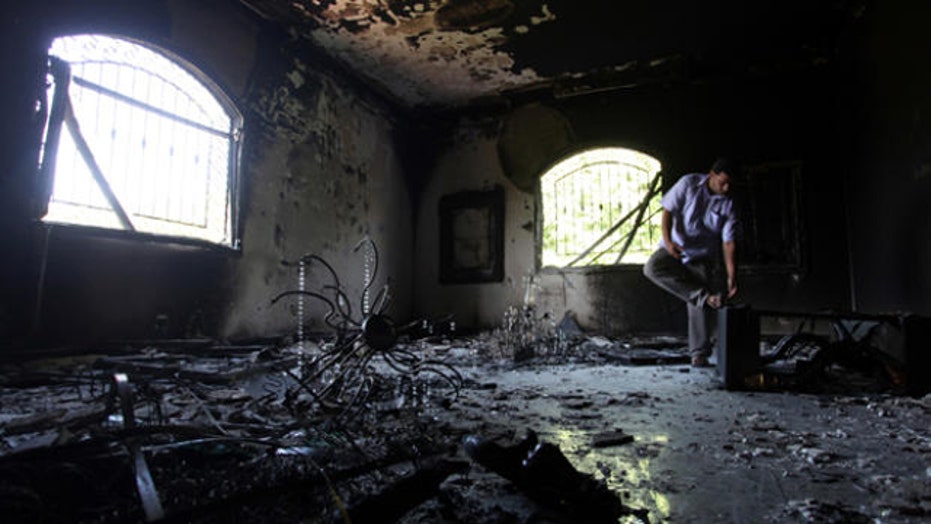 Benghazi: Where are the answers?

What do we know seven months later?

House Republicans are trying to secure clearance in order to interview a number of "witnesses" for their investigation into the Benghazi terror attack, as potential whistleblowers seek protection against government retaliation, Fox News has learned.

The letters were written by Rep. Darrell Issa, R.Calif., chairman of the House Oversight and Government Reform Committee, and ask each agency for its official description of the legal steps needed to get clearance for whistleblowers to be able to share classified information about the attacks with their attorneys.

Issa said "numerous individuals" have approached the committee with information on the attack. It's unclear whether these individuals were at the Benghazi compound during the Sept. 11, 2012, assault, or are officials in Washington with knowledge of the situation. He noted that some witnesses might need to retain counsel, which is why he asked for the documentation on that issue.

He also asked that each agency assure these individuals that they can provide information to Congress.

“With that in mind, it is important that the Department makes clear to its employees that they are free to furnish information to Congress in accordance with their statutory rights,” the letter states. “Additionally, retaliation against a witness who communicates with the Committee can be considered obstruction of a congressional investigation and is punishable by fine and imprisonment.”

The letters ask for the material to be provided to Issa's office by 5 p.m. April 17, 2013. When contacted by FoxNews.com at 5 p.m., a spokeswoman said they had not received the information yet.

Earlier Wednesday, Secretary of State John Kerry testified before the House Foreign Affairs Committee that the U.S. has identified people it believes were involved in the attack that killed Ambassador Chris Stevens and three other Americans. Kerry testified that investigators from the FBI were still analyzing footage from the Sept. 11, 2012 attack. He did not say if anyone had been arrested or detained by American or Libyan authorities in the seven months since the bombing in Libya.