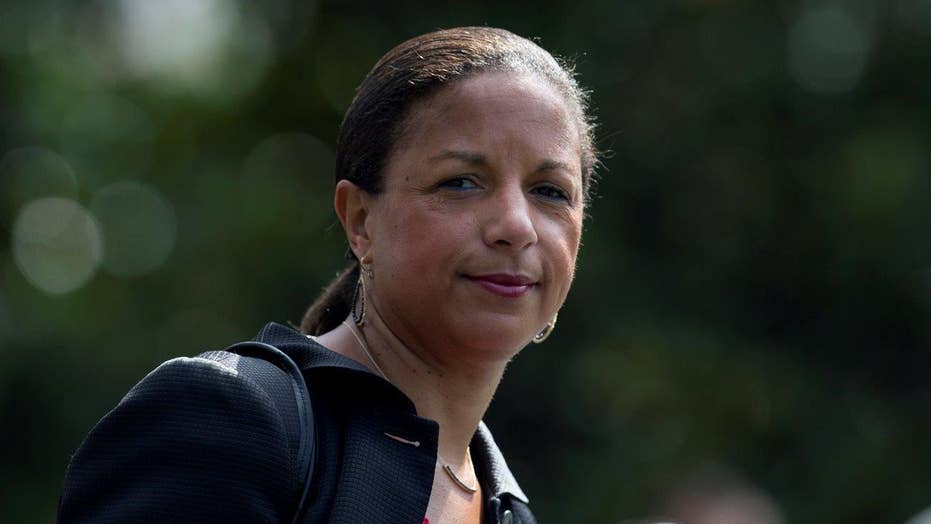 Lawmakers probing the surveillance of key officials in the Trump campaign and administration say the intelligence agencies now nominally under the president’s control are stonewalling efforts to get to the bottom of who revealed names and leaked protected information to the press.

The House and Senate Intelligence Committees are currently investigating allegations the Obama administration spied on Trump associates – and possibly Trump himself – for as long as the year preceding his inauguration. And while former Obama National Security Adviser Susan Rice has been implicated as at least one of the officials who sought redacted names from surveillance transcripts, multiple lawmakers and investigators for the panel told Fox News the CIA, FBI and National Security Agency - all agencies in position to aid the probe – are not cooperating.

“Our requests are simply not being answered,” said one House Intelligence committee source about the lack of responsiveness. "The agencies are not really helping at all and there is truly a massive web for us to try and wade through.”

A Senate Intelligence Committee source said the upper chamber had the same experience.

“Our requests are simply not being answered.”

“Any information that will help find the wide extent on the unmasking and surveillance is purposely not being provided,” said the Senate source.

An FBI spokesperson said the bureau is working in good faith.

“The FBI will continue to work with the congressional oversight committees on their requests,” the spokesperson said.

A CIA spokesperson told Fox News the NSA was the lead agency on the matter and referred questions to it.

Rice is at the center of the unmasking controversy. (Associated Press)

In a statement to Fox News, the NSA called the allegations "categorically untrue."

"Allegations that the National Security Agency is 'withholding information' from congressional intelligence committees investigating Russian interference in the 2016 election are categorically untrue," the statement said. "NSA fully supports the committees' work. We have already made available significant information in response to their requests, and we look forward to continuing to work with them in the execution of their important responsibilities."

Sources within the NSA said they are watching the investigation closely, with one telling Fox News, “A number of people saw a lot of very questionable stuff. [The Obama administration was] using national assets and intelligence for politics.”

It was not clear if the alleged lack of cooperation was from top brass or agency holdovers resisting the new administration.

Pompeo was on the House Intelligence Committee, but now runs the CIA. (Associated Press)

The CIA is now headed by former Rep. Mike Pompeo, who himself served on the House Intelligence Committee prior to his nomination. The FBI and NSA are run by James Comey and Mike Rogers, respectively. Both are holdovers from the Obama administration. Last month, both men declined to appear at a private closed door House Intelligence Committee briefing and have not met with the committee members since.

The meeting was supposed to be a follow-up to public testimony by Comey and Rogers to the committee in late March on the topic of Russian meddling in the presidential election and the alleged mishandling of intelligence related to the Trump transition team.

During the public hearing, the pair had declined to answer more than 100 questions, and Comey has been completely unavailable since.

House Intelligence Chair Devin Nunes, R-Calif., told Fox News he had hoped that behind closed doors, Comey and Rogers would be more forthcoming.

Nunes wants answers from the intelligence agencies, but his panel has been stymied, according to sources. (Associated Press)

Nunes also wanted to ask them about intelligence reports he’d viewed that showed incidental electronic intercepts of Trump team communications. The intelligence reports, which included surveillance of foreign targets, revealed that the names of Trump's team had been "unmasked" or revealed, and their identities widely disseminated throughout the government and to the media.

Nunes said during a March 22 press conference that he was “troubled” because the reports he’d seen were not connected to Russia or any foreign intelligence.

And while U.S. intelligence sources told Fox News that unmasking requests escalated after Trump was elected, Rice claimed she didn’t remember. “I don’t have a particular recollection of doing that more frequently after the election.”

President Trump on Wednesday claimed that he believes Rice may have committed a crime by requesting the identities of Trump associates who were mentioned in U.S. surveillance, though he did not provide proof.

Asked by the New York Times if Rice committed a crime, Trump said, “Do I think? Yes, I think.”

Rice isn’t the only Obama official implicated in the Trump team surveillance scandal. Multiple sources insist she was part of a group involved at the highest levels and was not calling the shots.

“A lot of us are upset. We believe this group of people were using national assets for politics and misappropriating them,” said one NSA source. “Don’t forget as the national security advisor, Susan Rice is supposed to ingest and digest. Despite what you are hearing, it is not normal to investigate especially in the broad manner that was being done. She [was] a White House staffer, not a member of an intelligence agency."