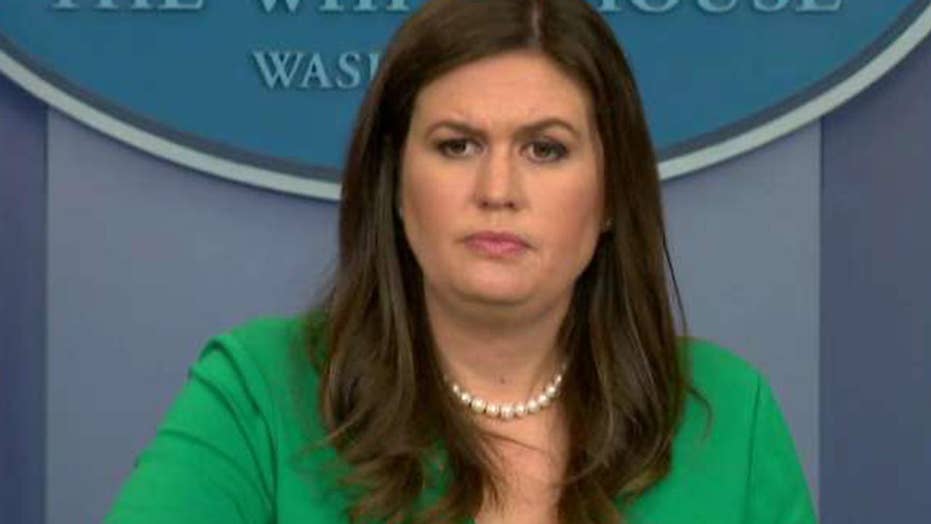 Press secretary pays tribute to victims' acts of heroism, says American spirit cannot and will not be broken.

“There is a time and a place for political debate but now is the time for the country to come together,” Sanders said at the daily briefing. “This is an unspeakable tragedy. Today is a day for consoling survivors and mourning those who were lost.”

Sanders noted that the investigation into Sunday's attack is still ongoing, and a motive is yet to be determined.

“It is premature to discuss policy when we don’t know all the facts,” Sanders said.

Nevertheless, Clinton was out early Monday with a series of tweets going after the NRA and silencers -- questioning how much worse the massacre might have been if silencers had been used.

“The crowd fled at the sound of gunshots. Imagine the deaths if the shooter had a silencer which the NRA wants to make easier to get,” she tweeted. “Our grief isn’t enough. We can and must put politics aside, stand up to the NRA, and work together to try to stop this from happening again.”

Clinton’s comments seemed to reference the NRA’s push to ease federal rules for silencers. She soon took heat from critics who called her remarks “ignorant” and “irrelevant” -- noting silencers in this case probably would not been dampened the sound very much.

Asked about Clinton's tweets, Sanders told reporters she hadn’t spoken with the president on the issue, but underscored that the investigation into the massacre is ongoing.

“I think before we start trying to talk about the preventions of what took place last night, we need to know more facts, and right now we’re simply not at that point,” Sanders said. “It is very easy for Mrs. Clinton to criticize and to come out, but I think we need to remember the only person with blood on their hands is that of the shooter, and this isn’t a time for us to go after individuals or organizations. I think we can have those policy conversations, but today is not that day.”

The shooting at a country concert outside Las Vegas’ Mandalay Bay resort left 58 people dead and more than 500 people hospitalized, making the horrific tragedy  the deadliest mass shooting in modern U.S. history. The shooter was identified as 64-year-old Stephen Paddock.

Sanders told reporters that the president was briefed on the attack early Monday morning by his Chief of Staff John Kelly and has been updated “regularly and constantly” throughout the day.

“I’ve seen him today and I think he, like most of America, is saddened and certainly his heart and compassion goes out to those who are affected,” Sanders said. “Today is more a day of reflection, mourning, and gratefulness for those that were saved.”

But Sanders underscored the president’s commitment to the Second Amendment, saying “he’s been clear” that he is a “supporter,” and that likely has not changed.

“It’s time for Congress to get off its ass and do something,” Murphy said in a statement.

When asked about Murphy’s comments in the briefing, Sanders said she agreed that Congress “should get up and do something,” taking a shot at the legislative branch for having “several months” of “doing very little.”

“We don’t want to try to create laws that won’t stop these types of things from happening,” Sanders said, citing the example of Chicago, a city with some of the “strictest gun laws in the country” and some of the highest murder rates. “When that time comes, we have to look at things that may have real impact.”

Sanders on Monday also tackled the thorny subject of North Korea, backing up the president after he tweeted over the weekend telling his Secretary of State Rex Tillerson to stop wasting time negotiating with Kim Jong Un's regime.

“I told Rex Tillerson, our wonderful Secretary of State, that he is wasting his time trying to negotiate with Little Rocket Man,” Trump tweeted Sunday. “Save your energy Rex, we’ll do what has to be done!”

TRUMP: TALKING TO KIM JONG UN A WASTE, 'WILL DO WHAT NEEDS TO BE DONE'

Sanders echoed the statements, saying they have put "diplomatic pressure" on the rogue nation, but "now is not the time to have conversations with North Korea."