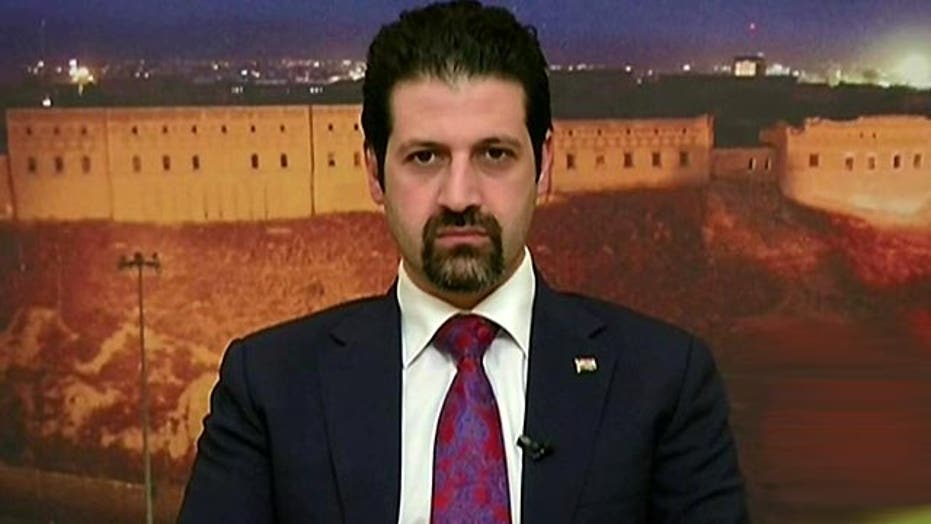 What can the US do to help Kurds stand up to ISIS?

Kurdistan Regional Government Deputy Prime Minister Qubad Talabani told Fox News’ Bret Baier Wednesday that there is a “great imbalance” between the weaponry used by the Islamic State militants and that of the Kurdish peshmerga security forces, imploring the U.S. to provide the Kurds with advanced weapons.

Talabani said on “Special Report with Bret Baier” that the caliber of the weapons used by the Islamic State fighters, also known as ISIS or ISIL, is far greater than that of the Kurdish forces.

"There is a great imbalance in the weaponry because ISIS have state of-the-art, U.S.-supplied weaponry that they were able to take with ease from the Iraq armed forces," he said.

Talabani was referring to the fact that the militant group seized a large arsenal of U.S.-supplied weapons from the Iraqi army when the group captured the city of Mosul. In contrast, Talabani said the Kurdish forces are working with decades-old Soviet weaponry previously used in many other battles.

“Our weaponry cannot be compared to the weaponry that ISIS has, but we have the heart, the spirit, the bravery, and we have the dedication required to win this fight,” he said, “if that is coupled with upgraded weaponry, with updated cooperation with our friends and allies in the United States, we will have no doubt eliminate ISIS from Iraq.”

Talabani emphatically insisted that if the U.S. would supply the Kurdish peshmerga security forces with advanced weaponry, the Kurdish troops can be an effective, boots-on-the-ground force to drive out the militants.

“Collectively Iraq, Kurdistan and the United States can do this, can accomplish this mission and drive ISIS from Iraq,” he said. “But this requires decisive action and decisive action now.”

The U.S. has provided small arms and mortars to the Kurds, but has not armed them directly. A defense official told Fox News Wednesday that the U.S. is not planning on changing its policy.

“The Department of Defense has not provided direct arms to the Kurds and has no plans to do so in the future,” the official said.