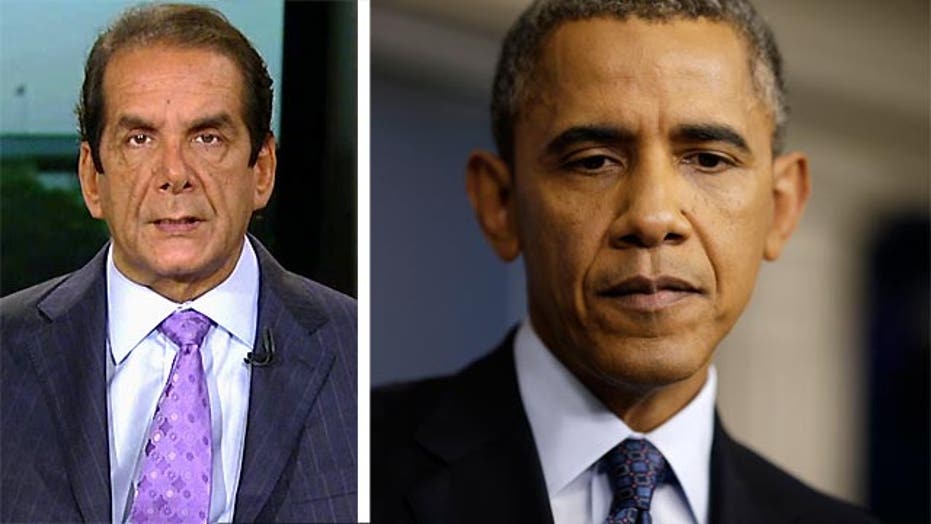 Krauthammer: Obama “hasn’t begun to rise to the occasion” on ISIS

Charles Krauthammer said Tuesday on “Special Report with Bret Baier” that a new video purportedly showing the execution of a second American journalist by Islamic State militants “is an open challenge to the United States and to Obama, and he hasn't begun to rise to the occasion.”

The video, called a “A Second Message to America,” was posted online and first reported by the intelligence firm SITE Tuesday. It purports to show Steven Sotloff, a 31-year-old freelance journalist, who speaks to the camera before a cloaked Islamic State fighter apparently begins to decapitate him. It comes two weeks after the beheading of another American journalist, James Foley.

State Department spokeswoman Jen Psaki said the intelligence community will work “as quickly as possible” to determine the video’s authenticity, but would not say whether this would constitute an act of war. She said the prior execution of journalist James Foley was a “horrific terrorist act,” and was a “motivating” factor for creating a coalition to address the Islamic State.

Krauthammer, a syndicated columnist and Fox News contributor, saidsuch comments and other actions by members of the Obama administration suggest a lack of urgency.

"Well this is an open challenge to the United States and to Obama, and he hasn't begun to rise to the occasion," he said. "When the first beheading happened, he made a speech, and then he went off and played golf. There's a kind of inertia a passivity, almost a defeatism in his response and you heard it from the State Department spokesman."

Krauthammer noted that the Obama administration has said it is working with its allies and partners to create a coalition to fight the militants, but said such an effort would have to be led by the U.S.

"I hope he's working on it. He doesn't have to strike tomorrow. But there's no indication there's a serious effort to actually, to create a strategy, meaning to create a campaign where we supply the air power, and others are supplying the manpower on the ground," he said. "That's the only answer."

Krauthammer added that he believes the lack of a coherent strategy is only strengthening the terrorist organization.

"Obama and the administration are building up ISIS, even beyond what Obama is doing in its own propaganda," he said. "That's not a good first step in confronting them."