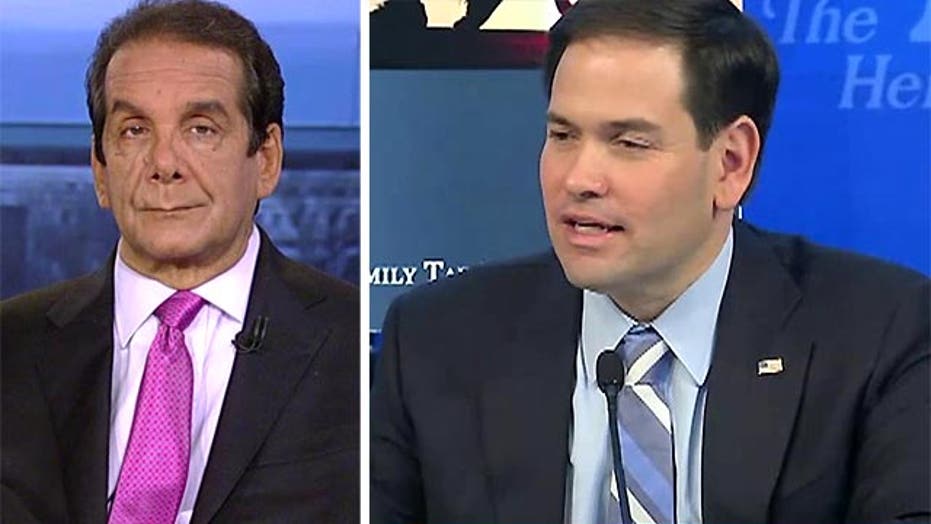 Senator Rubio used Wednesday – Tax Day – to sell his plan, along with his Republican co-author, Sen. Mike Lee of Utah. The Rubio-Lee tax plan would, in part, eliminate the capital gains tax, reduce the current seven tax brackets for individuals and families to just two –15% and 35%--and implement a new child tax credit of up to $2500 per child.

But Rubio’s plan has faced criticism from conservatives, with a Wall Street Journal editorial Monday saying:  “With this proposal, Senator Rubio makes himself the party's most visible ally of the ‘new’ Republican idea that the Reagan tax-cutting agenda is a political dead end, and that the party now must redistribute revenue directly to middle-class families.”

Rubio defended his plan Wednesday saying: “ I don't think the Wall Street Journal or any conservatives have any quarrel with what we've done on the pro-tax is-on the pro-growth side of this debate,” he said.

But Krauthammer, a syndicated columnist and Fox News contributor, agreed with Rubio –and the Wall Street Journal –saying: “I think this argument between him and the Wall Street Journal over what is essentially two percent of the rate, I think it's slightly overexaggerated. It's not going to make any difference in the real world if there's a one or two percent lower rate, and I think what's he's doing is trying to win votes with the sweetener of the child tax credit, there's nothing wrong with that.

And it's true that a pudding has to have a theme, but a tax plan doesn't have to have a theme. The theme here is that you're lowering the rate, particularly on the corporate side. You're lowering the tax on investment and return, capital gains, which is what everybody on the right has always said is the engine to drive growth. So, you've got very serious pro-growth elements in here, and you've got a sweetener for the child tax credit, that that's a rejection of Reaganism I find slightly over the top,” Krauthammer said.