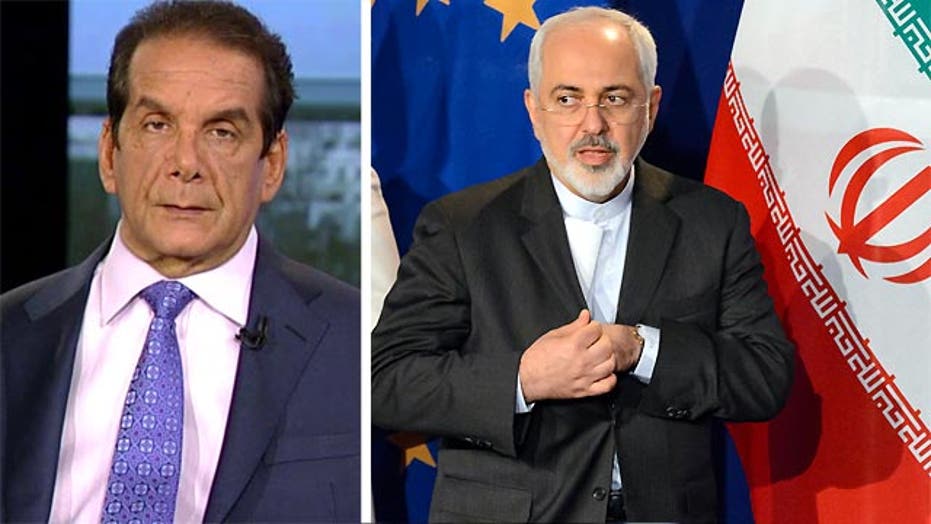 Charles Krauthammer told viewers Thursday on “Special Report with Bret Baier” that the terms of the deal reached to curb Iran’s nuclear program were evident “by the jubilation in the face of the Iranian Foreign Minister when he announced what had been agreed to” and argued the tentative deal was lopsided to the Iranians' advantage.

On Thursday, the United States, Iran, the European Union, Russia, China, France, Britain and Germany announced the initial terms on the outline of a deal to rein in Iran's nuclear program in exchange for sanctions relief.

The parties must reach a final agreement by June 30 and all sanctions will remain in place until such an agreement is reached. Under the arrangement, Iran will reduce its number of uranium enrichment centrifuges it has to 6,104 from 19,000 and receive gradual sanctions relief with compliance; failure to comply would cause sanctions to “snap back.”

President Obama heralded the arrangement saying “this framework would cut off every pathway Iran could take to develop a nuclear weapon."

But Krauthammer, a syndicated columnist and Fox News contributor, argued that lifting sanctions would only embolden Iran.

“Iran is promised a total lifting of sanctions. That's UN, EU, United States, everywhere. We're not sure about the timing but it could be as early as June. And, that will supercharge the Iranian economy, will strengthen the regime, will give it tens of billions of dollars with which not only to build its nuclear facilities, but to use for the proxy wars around the Middle East,” Krauthammer said.

“It is possible when they sign the agreement in June there will be a huge relief of sanctions, and when Obama speaks about snapping them back, if the Iranians are cheating, there is not a chance in the world that the Chinese or the Russians or even the Europeans are going to snap on sanctions again, we would be acting alone, we'd be completely isolated,” he added.

“So number one they get their economy back and that's all they really wanted, but the second, the most astonishing thing is that in return they are not closing a single nuclear facility. Their entire nuclear infrastructure is intact,” Krauthammer said.