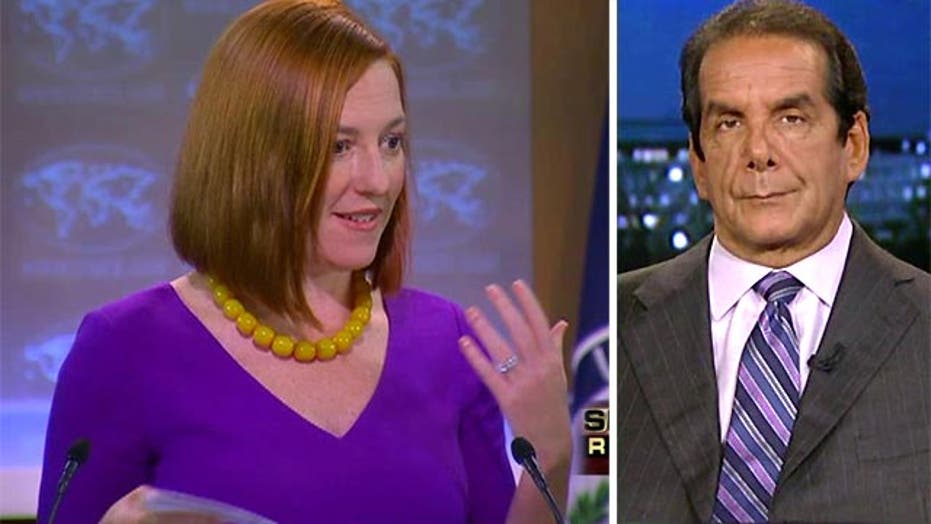 Krauthammer: “Happy talk” of success in Iraq amid fighting in Syria is “complete nonsense”

Charles Krauthammer said Tuesday on “Special Report with Bret Baier” that "all the happy talk”from the Obama administration about the success of airstrikes in Iraq is “complete nonsense" and noted that Syrian Kurdish fighters are engaged in a final stand against the Islamic State in the city of Kobani.

On Tuesday, Turkish President Recep Tayyip Erdogan warned of disaster in the ongoing siege of Kobani by the Islamic State militants.

“This terrorism cannot be stopped with aerial bombardments alone….This issue cannot be solved with air attacks unless there is cooperation with those who are fighting on the ground," he said.

Krauthammer, a syndicated columnist and Fox News contributor, said the situation in Kobani is at a crucial point.

"Look, what's happening today in Kobani is very important, for all the happy talk we just heard from the State Department spokesperson about our great advances in Iraq, it's complete nonsense," he said. "And what's happening now in Syria is so important."

Krauthammer said the situation in Kobani makes it clear the U.S.' military efforts so far have be insufficient to stop the terror group, which is also known as ISIS or ISIL.

"The Syrian Kurds, right now, are trying to hold their ground, they are being defeated and routed," he said. "It would be a tremendous strategic and symbolic victory if ISIS succeeds, and right now it is, and what it's getting from the U.S., that we can't defend them unless we have troops on the ground? We're doing practically nothing from the air. Five strikes today, utterly meaningless."

Krauthammer said it is clear the Kurds need more support and if the U.S. does not provide it, there could be dire consequences.

"When in fact we should be and could be doing a massive air campaign in support of these Kurds, because if this falls, it's going be a huge setback for the United States, and for any of the good guys on the ground in Syria and Iraq," he said.