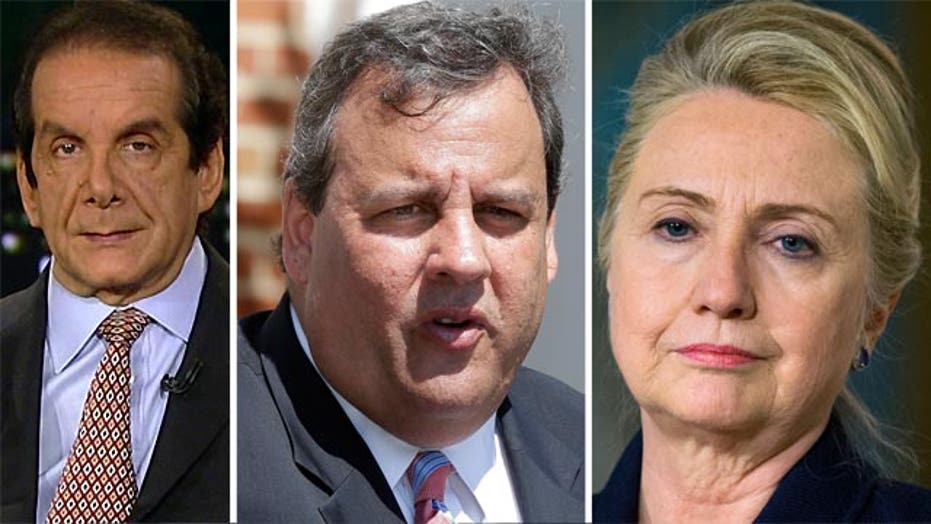 The GWB-Fort Lee flap vs Benghazi

Charles Krauthammer told viewers Thursday on “Special Report with Bret Baier” that New Jersey Governor Chris Christie’s future in the wake of a bridge scandal involving his aides is simple.

“Christie is now hostage to the truth," Krauthammer said. "If he told the truth, and he had no knowledge of this, it will hurt him. If he didn't tell the truth, and we will know it for sure one way or the other, if he did know about this thing, he's toast.”

In a nearly two hour press conference on Thursday, Christie said he was “embarrassed and humiliated by the conduct of some of the people on my team.” He fired his deputy chief of staff, Bridget Anne Kelly, after emails surfaced showing she had arranged traffic jams on the George Washington Bridge to punish the mayor of Fort Lee, N.J. for not endorsing his re-election campaign.

Krauthammer, a syndicated columnist and Fox News contributor said that while scandal does hurt Christie in two ways, “I don't think either of them is fatal, especially because we have three years to go until the presidential election.”

“The first is the competence issue, it did happen under his watch, and remember, whoever runs in 2016 will be running in the wake of and against the legacy of Obama --  who showed incompetence as an executive, and was the bystander president --  he didn't know about the IRS, he read about the AP scandal in the press, he… who knows," he said. "Maybe he didn't even know there existed an ObamaCare website the way he talked about it. So, you want to run as a competent executive who is hands on, so this isn't going to help Christie in making that case.

“The second element of it, which is going to be a little more damaging: Christie's strength is how tough he is. But, it can become a negative if the toughness is a petty toughness. What's going to happen now, the press in New Jersey is going to look for previous incidents of strong arming. They're going to be all kind of Democrats, especially, who are going to stand up and say, here's what happened: he threatened me here, he threatened me there. If it ends up that it's above and beyond the normal give and take, it would hurt Christie. But otherwise, I think again, if he told the truth, he'll put this behind him.”