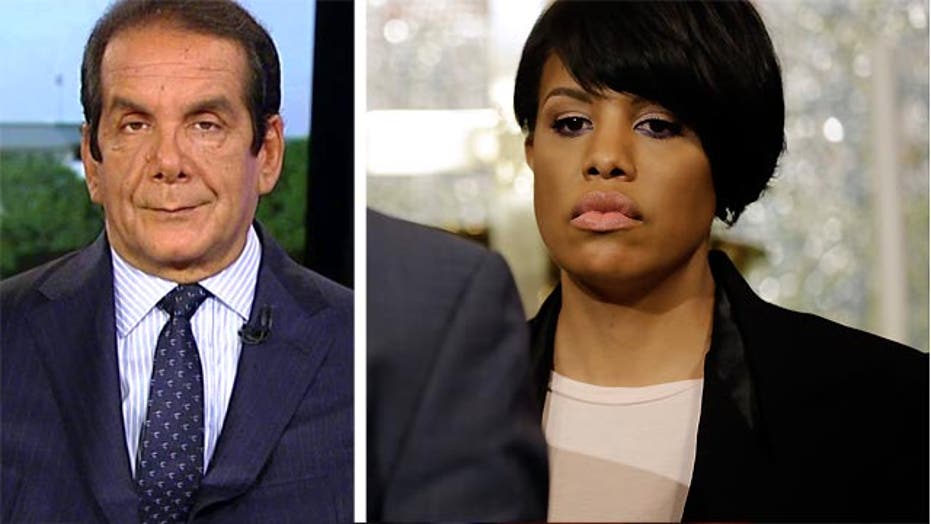 Krauthammer: Baltimore Mayor elected “not to express sadness but to do something”

Charles Krauthammer told viewers Tuesday on “Special Report with Bret Baier” that Baltimore Mayor Stephanie Rawlings-Blake should have been more proactive in confronting the violence that spread across the city on Monday night, saying “you elect a mayor not to express sadness but to do something. To prevent the events that cause sadness.”

Rioting and looting spread through Baltimore on Monday night, following the funeral of Freddie Gray, a 25-year-old who died two weeks ago after being taken into police custody.

On Tuesday afternoon, Mayor Rawlings-Blake told reporters “Last night was a very rough period for our city, but today I think we saw a lot more about what Baltimore is about, we saw people coming together to reclaim our city, to clean our city and to help heal our city.”

But Krauthammer, a syndicated columnist and Fox News contributor, said that reported instructions to Baltimore Police to show restraint were misguided:

“They deliberately held back the police, for reasons that these were, what, 15, 16 year old kids. If a 16 year old kid is torching a CVS store, a drug store, the police have to do something. They can't just say, 'well they're underage, or they're too young so I'm going to give them a pass,” Krauthammer said.

On Tuesday afternoon, President Obama, in a joint press conference with Japanese Prime Minister Shinzo Abe, said “there's no excuse for the kind of violence that we saw yesterday. It is counterproductive” adding that, “this has been a slow-rolling crisis. This has been going on for a long time. This is not new. And we shouldn't pretend that it's new.”

Krauthammer acknowledged President Obama’s comments, and argued that the underlying causes behind the issues sparking this and other violence in inner cities have not been addressed.

“(Former New York Senator) Pat Moynihan once said that the one role of any society is to socialize it's young males, and it's the young males who are out there rioting yesterday. And there are two issues in the inner cities, one is single parenthood, and the other is the worst schools on earth," Krauthammer said.

"The first, we have no idea how to solve that and the second, we do. If you can't improve the schools, give the kids a choice to go to better schools. Parents begged to have that opportunity but the teachers unions won't allow it and, thus, the Democrats won't. If you want to do something, let them choose their schools.”