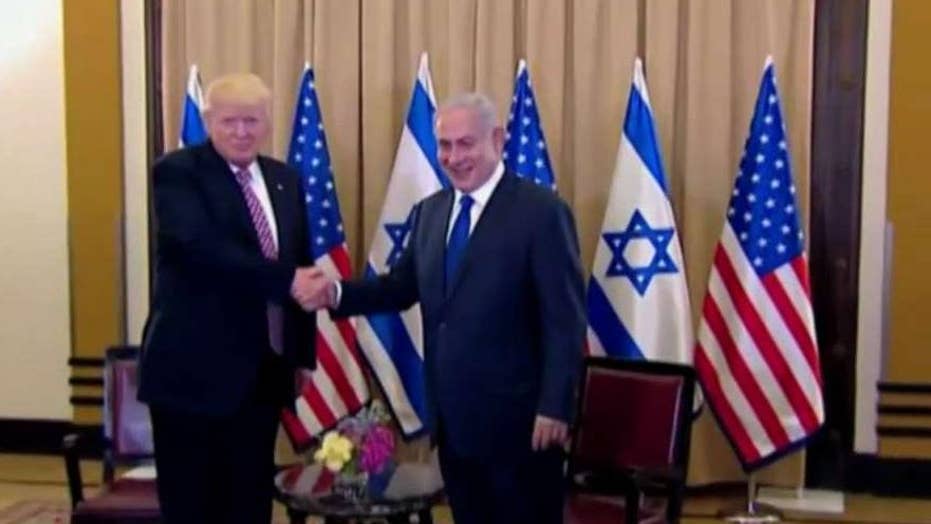 Famed former Secretary of State Henry Kissinger will mark his 96th birthday Monday, but he hasn't retired from sharing his insights on global affairs.

At a gathering in Washington last week, Kissinger spoke about the Trump administration’s upcoming Middle East peace plan, dubbed the “Deal of the Century.”

Both Kissinger and Shoval reportedly spoke about the Middle East peace plan, set to be unveiled in Bahrain in June.

Kissinger -- who served as secretary of state and national security adviser under presidents Richard Nixon and Gerald Ford -- went on to praise Israeli Prime Minister Benjamin Netanyahu, saying he “correctly analyzes the situation."

The first part of the Trump plan, which has been two years in the making, will be revealed June 25-26 during a conference that will bring together government and business leaders from around the world in a bid to increase investment in the Palestinian economy.

The conference won’t be addressing the most contentious parts of the conflict between Israel and the Palestinians -- such as borders, the status of Jerusalem, Palestinian refugees and Israel’s security.

KUSHNER: MIDDLE EAST PEACE PLAN TO BE UNVEILED AFTER RAMADAN

In a statement with Bahrain, the White House said the June workshop will give government, civil and business leaders a chance to gather support for economic initiatives that could be possible with a peace agreement.

The U.S. hopes Arab countries will invest in Palestinian territories, fix crumbling infrastructure and support other industrial projects in an effort to convince the leadership to accept the peace plan.

“The Palestinian people, along with all people in the Middle East, deserve a future with dignity and the opportunity to better their lives,” Trump’s senior adviser and son-in-law, Jared Kushner, said in a statement Sunday.

“Economic progress can only be achieved with a solid economic vision and if the core political issues are resolved.”