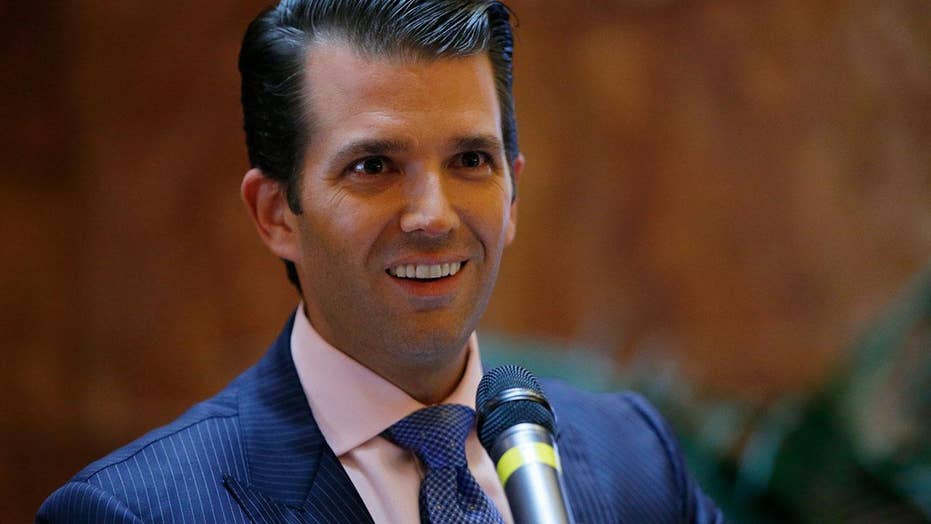 President Donald Trump’s eldest son, Donald Trump Jr, tweeted an email thread on how a meeting with a Russian lawyer with potentially incriminating information on Hillary Clinton came to fruition, leading up to the 2016 presidential election

Also attending the meeting with Trump Jr., who has no official role in his father’s administration, were President Trump's then-campaign manager, Paul Manafort, and adviser Jared Kushner.

Trump Jr. initially responded sarcastically to a series of stories about the meeting that appeared in the New York Times, tweeting Monday, “Obviously I'm the first person on a campaign to ever take a meeting to hear info about an opponent... went nowhere but had to listen.”

On Tuesday he acknowledged on Fox News Channel’s “Hannity” that, looking back, he “probably would have done things a little differently.” He also described the meeting as not memorable, and “literally just a wasted 20 minutes.”

While it is not known who might have leaked details about the meeting to the Times, the Trump White House, which values loyalty, is said to be “angry” and conjecture abounds.

Here’s a look at the key figures in the latest episode to haunt the administration:

This British publicist, an unexpected player, stands at the center of the controversy, having brokered the meeting between Trump Jr. and Veselnitskaya. Goldstone appears to have initiated the conversation, according to what Trump Jr. called the “full email exchange,” which he released on Twitter.

In the emails, Goldstone claims he has contacts who can “provide the Trump campaign with some official documents and information that would incriminate Hillary and her dealings with Russia and would be very useful to your father.”

Goldstone refers in the emails to “very high level and sensitive information,” claiming the material is “part of Russia and its government’s support for Mr. Trump.”

In arranging the meeting with Trump Jr., Goldstone identified the other participant, presumably Veselnitskaya, as “the Russian government attorney who is flying over from Moscow for this Thursday.”

In an interview with NBC, however, Veselnitskaya denied any connection to the Russian government. She also contended that she had no damaging information on Clinton, seemingly contradicting claims made in the email exchanges between Goldstone and Trump Jr.

“I never had any damaging or sensitive information about Hillary Clinton. It was never my intention to have that,” Veselnitskaya told NBC.

Kremlin spokesman Dmitry Peskov told reporters Wednesday that Veselnitskaya is not linked to the Russian government. “We have already said we are absolutely unaware of this story, we have never been in contact with this lawyer,” he said. “She has nothing to do whatsoever with us."

But the denials have not stopped reports speculating that Veselnitskaya is actually an insider with close ties to Putin.

The emails show that Trump Jr. forwarded the messages with Veselnitskaya both to Manafort – Trump’s campaign manager at the time -- and Kushner the day before the meeting.

FILE - In this July 17, 2016 file photo, Trump Campaign Chairman Paul Manafort talks to reporters on the floor of the Republican National Convention at Quicken Loans Arena in Cleveland as Rick Gates listens at back left. Emails obtained by The Associated Press shed new light on the activities of a firm run by Donald Trumpâs campaign chairman. They show it directly orchestrated a covert Washington lobbying operation on behalf of Ukraineâs ruling political party, attempting to sway American public opinion in favor of the countryâs pro-Russian government. Manafort and his deputy, Rick Gates, never disclosed their work as foreign agents as required under federal law. (AP Photo/Matt Rourke, File) (AP)

According to Politico, a source close to Manafort said the former Trump insider “hadn’t read all the way to the bottom of the email exchanges on his phone and that he didn’t even know who he was meeting with when he attended the 20- to 30-minute session.”

On Wednesday, Senate Judiciary Committee Chairman Chuck Grassley (R-IA), whose panel is investigating Trump links to Russia, said he would subpoena Manafort, if necessary, regarding his presence at the June 2016 meeting.

Kushner, the president’s son-in-law and the only attendee of June 2016 meeting who formally serves in the Trump administration, has drawn criticism for his involvement. Veselnitskaya claimed that Kushner stayed in the meeting for seven to 10 minutes.

Kushner has come under fire in the past, for not fully disclosing his meetings with foreign government officials properly on a required government security clearance form called SF-86.

Referring to the form, Kushner’s lawyer, Jamie Gorelick, said in a statement, "Mr. Kushner has submitted additional updates and included, out of an abundance of caution, this meeting with a Russian person, which he briefly attended at the request of his brother-in-law, Donald Trump Jr. As Mr. Kushner has consistently stated, he is eager to cooperate and share what he knows.”

Democrats have been quick to call for Kushner’s resignation, and removal of his security clearance.

Marc Lotter, press secretary for Vice President Mike Pence, issued a statement Tuesday, saying, “The vice president was not aware of the meeting.”

Pence “is not focused on stories about the campaign, particularly stories about the time before he joined the ticket,” the statement said. Pence was announced as Trump’s pick for vice president via Twitter on July 16, 2016, joining the campaign a month after Trump Jr.’s meeting with Veselnitskaya.

Amid swirling speculation that Pence is “distancing himself” from the “Trump Jr. Scandal,” White House deputy press secretary Sarah Huckabee Sanders was asked Tuesday about the relationship between Pence and President Trump.

“There is absolutely no distance between the president and the vice president,” she responded.

Trump Jr. has insisted he never informed his father about the Veselnitskaya meeting, telling Sean Hannity, “there was nothing to tell.”

The question remains: Who might have alerted the New York Times to the existence of this meeting, and the emails?

Guesses from Twitter users range from the Russians, to White House strategist Steve Bannon, to Pence.

Former Trump campaign adviser Roger Stone weighed in, telling BuzzFeed that his money is on former Trump campaign manager Corey Lewandowski. “Donny was a vocal critic of Corey,” Stone told the website. “He walked him towards the exits, and fits the broad definition of a White House adviser. I’m not unbiased, but he’d be my choice.”

Lewandowski told “Fox & Friends” on Wednesday, “I don’t know who the leaker is, but let me tell you this: If it were up to me, and somebody was speaking to the media, I would fire them on the spot -- and Donald Trump will do the same.”

Stone also posited that intelligence sources could be to blame for the leaks.