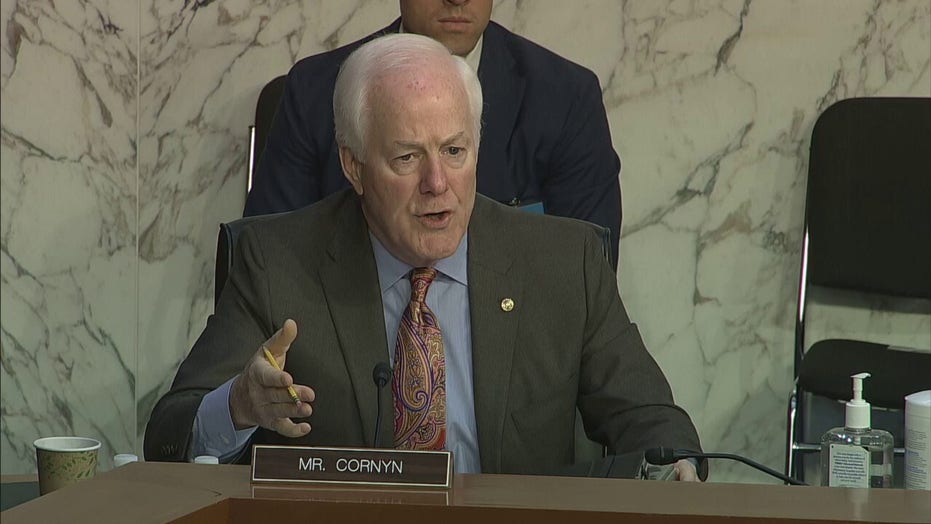 But the tension quickly dissipated when Sen. Jon Ossoff, D-Ga., the least senior member of the Senate, admonished his fellow senators to stop "bickering."

"I noticed that after every series of questioning on this side of the aisle, you choose to editorialize and contradict the points being made," Cornyn said. "I don't know whether we will have an equal opportunity to editorialize."

Sen. John Kennedy, R-La., backed up Cornyn. He specifically criticized Durbin for mentioning Sen. Josh Hawley, R-Mo., by name in those editorial comments without giving him a chance to respond.

Durbin, however, said it is his right as chairman of the committee to make such comments.

"It's called chairman's time. It is a tradition on this committee exercised by Sen. Lindsey Graham as chairman and Sen. Grassley," Durbin said.

Kennedy interrupted Durbin, but Durbin shot back that he would recognize Kennedy only after he made his point "without interruption."

"There will not be a separate set of rules for Democrats in control of this committee. That was used as a response time and time again by those senators," Durbin said. "And it was accepted. If what I said was somehow problematic or painful yesterday, I'm sorry, but the Democrats are going to use the same mechanism that Republicans have used on this committee."

Shortly after, Ossoff chimed in asking that the committee redirect its attention to Jackson herself.

Sen. Jon Ossoff, D-Ga., then a candidate for Senate, speaks to the crowd during an outdoor drive-in rally on Dec. 5, 2020 in Conyers, Georgia.  (Jessica McGowan/Getty Images)

"The American public is now turning into these proceedings, expecting a substantive discussion of matters of grave importance to the country with a nominee for the Supreme Court before us," he said. "I don't think we've set an appropriate tone by bickering over time and process at the outset of the proceedings."

Ossoff added: "I would humbly request that Ranking Member Grassley make a statement. … I and Sen. Tillis have the opportunity to question the nominee, and then we can litigate balls and strikes from yesterday's hearing. Would that be acceptable to the committee?"

"In the name of your humility, we should do that," Durbin said as the hearing room broke out in laughter at Ossoff's comment.

Wednesday is the second and final day that senators are publicly questioning Jackson in her confirmation process. Ossoff and Sen. Thom Tillis, R-N.C., are beginning the hearing with 30 minutes of questioning each after they did not get a chance to speak with Jackson Tuesday.

Then all 22 senators on the committee will be allowed to question Jackson for 20 minutes each. Thursday will be the final day of Jackson's hearing with outside experts invited to testify about the nominee.

Wednesday's hearing is likely to be contentious, with Republicans grilling Jackson on her treatment of criminal offenders, particularly child pornography offenders. Democrats are saying Republicans' line of questioning is invalid and that Jackson is in the mainstream of federal judges when it comes to sentencing such criminals.

Sen. Ted Cruz, R-Texas, on Tuesday also questioned Jackson on critical race theory books used in a private elementary school on which Jackson sits on the board. And Sen. Marsha Blackburn, R-Tenn., pushed Jackson to define the word "woman," which Jackson declined to do. It's possible both of those topics come up again Thursday too.