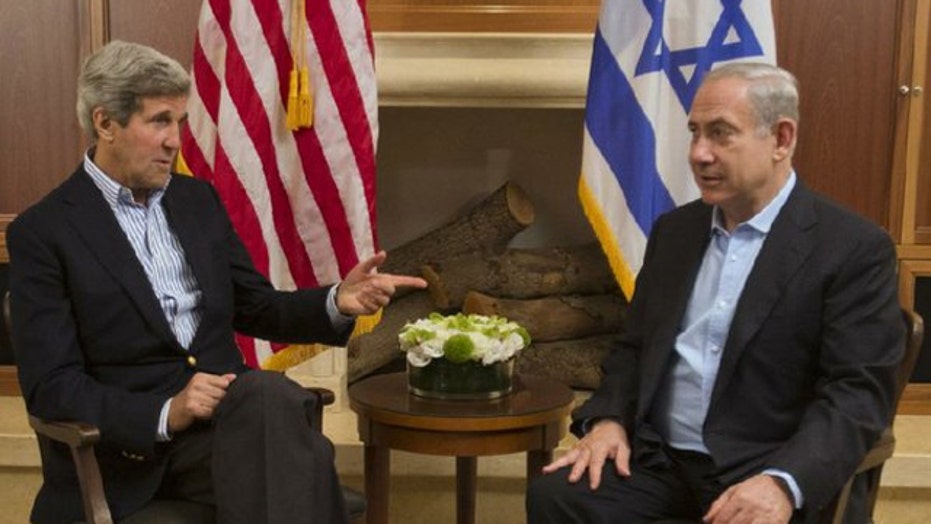 Peace talks between Israel and Palestine set to resume

Representatives from Israel and Palestine will meet in Washington on Monday

Secretary of State John Kerry named a former U.S. ambassador to Israel as the U.S. point man for newly resumed peace talks between the Israelis and Palestinians, which are set to begin Monday evening in Washington.

In a brief announcement Monday morning, Kerry appointed former ambassador Martin Indyk as the "special envoy" for the new round of Mideast peace negotiations. Keeping a cautiously optimistic tone, Kerry noted that as usual the talks will present both sides with "difficult choices" but said the consequences of inaction would be worse.

"It's no secret that this is a difficult process. If it were easy, it would have happened a long time ago," he said.

It is unclear whether Kerry will be able to surmount the issue that has vexed so many of his predecessors. The administration tried to jump-start peace talks during President Obama's first term, only to see both sides peel away from the negotiating table.

But Kerry spent much of his first six months as America's top diplomat in frenetic diplomacy trying to get the two sides to agree to resume peace talks that broke down in 2008. Since February, he has made six trips to the region shuttling between Israeli Prime Minister Benjamin Netanyahu and Palestinian President Mahmoud Abbas to try to cajole them into returning to negotiations.

Obama, in a written statement, said the resumption of talks is a "promising step forward, though hard work and hard choices remain ahead."

Indyk's appointment has been carefully choreographed to come just hours before senior Israeli and Palestinian negotiators sit down for a working dinner hosted by Kerry.

That followed a decision by Israel's Cabinet to free 104 long-held Palestinian prisoners, a longstanding demand of Abbas.

Abbas has been reluctant to negotiate with Netanyahu, fearing the hard-line Israeli leader will reject what the Palestinians consider minimal territorial demands. The Palestinians want a state in the West Bank, Gaza and east Jerusalem, territories Israel captured in 1967, but have accepted the principle of limited land swaps to allow Israel to annex some of the dozens of settlements it has built on war-won lands.

Abbas had repeatedly said he will only go to talks if Israel either freezes settlement building or recognizes the 1967 lines as a starting point for drawing the border of a state of Palestine.

Israel has made no such concessions, at least publicly, and the details of the framework for the talks brokered by Kerry remain shrouded in mystery.

Indyk, currently at the Brookings Institution think tank in Washington, served as former President Bill Clinton's ambassador to Israel and was a key part of the failed 2000 Camp David peace talks. He was also a special assistant to Clinton and senior director for Near East and South Asian affairs at the National Security Council from 1993 to 1995. And, he served as Assistant Secretary of State for Near Eastern affairs in the State Department from 1997 to 2000.

Before working in government, Indyk was founding executive director of the Washington Institute for Near East Policy.

Indyk, 62, replaces David Hale, who had served as a place holder in the post until last month. He had replaced former Sen. George Mitchell as the Obama administration's first special Mideast envoy. Mitchell resigned in 2011 following two years of fruitless and frustrating attempts to get the Israelis and Palestinians to engage in serious negotiations.