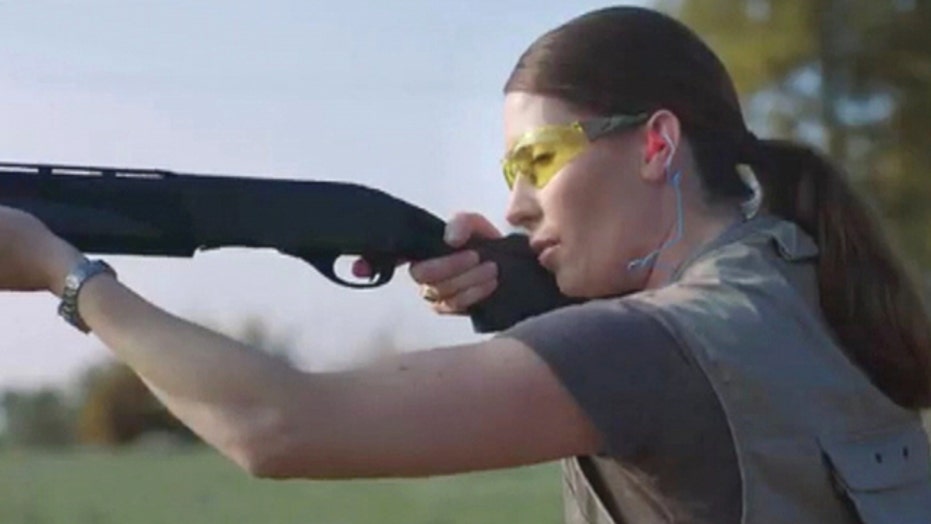 KY Democratic candidate tries to distance herself from Obama

Call it a Kentucky shootout.

“Alison Lundergan Grimes thought holding a gun like Barack Obama could convince voters that she’s ‘not Barack Obama,’ but Kentuckians already know that Grimes supports Obama and would be a sure vote in favor of implementing his anti-coal, anti-gun liberal policies," McConnell spokeswoman  Allison Moore said in a statement.

The ad, called “Skeet Shooting,” features Grimes confidently blasting away while speaking about how she is “not Barack Obama,” saying she disagrees with the president on guns, coal and the EPA. She then mocks a photo of McConnell that shows the senator holding a shotgun above his head.

“And Mitch, that’s not how you hold a gun,” she quips.

The McConnell campaign immediately fired back, drawing a comparison between Grimes’ ad and a widely-circulated photo of Obama released last year that showed the president shooting a shotgun.

In their ad, called “Convince,” McConnell’s campaign derided both Obama and Grimes as faux firearm afficionados.

“You know who also did a publicity stunt firing a gun? Barack Obama,” the ad states.

Grimes’ team said in a statement McConnell’s ad is a “sign of weakness.”

"This dishonest attack shows how little respect McConnell has for the voters of Kentucky," the statement said. "He’s throwing the entire kitchen sink at our campaign in one shallow ad, desperately hoping that Kentuckians will forget Alison is independent and has always put Kentucky first on coal, guns and the over burdensome EPA regulations. Her record and positions are clear. Mitch McConnell can’t run an honest campaign against Alison, and is now stooping to attack the straw man opponent he wish (sic) he had."

McConnell’s ad wasn’t the only criticism Grimes’ ad received. A report in the Daily Beast Tuesday derided Grimes’ ad as “one big gun gaffe,” claiming the Democrat was not really “skeet shooting” as the title claims.

“By definition, it is not skeet,” an anonymous manager of the shotgun division at a Kentucky gun range told The Daily Beast. “Skeet has two houses: a high house and a low house. You shoot a high house target, a low house target… Where people get this confused is that they’ll misuse the terms.”

Kentucky House Speaker Greg Stumbo came to Grimes’ defense, saying it is “foolish” to split hairs over what is or is not sport shooting.

“Shooting skeet, shooting trap or shooting clays are all the same where we come from,” the Democrat said in a statement provided to FoxNews.com. He later added, “I know first-hand that Alison Lundergan Grimes is good with her gun. I doubt Mitch McConnell even owns a gun or has ever hunted in his life.”

The McConnell campaign said the Daily Beast report proves Grimes is not what she claims to be.

"If a candidate is reduced to feeble attempts to convince voters they're something that they're not, a good first step would be to understand what activity they're participating in," Moore told FoxNews.com in a statement. "There is literally nothing about Alison Lundergan Grimes' campaign that isn't a laughably transparent attempt to deceive voters from the fact that she's Obama's Kentucky candidate running to support Obama's agenda."

Recent poll averages from Real Clear Politics have McConnell with a five point lead over Grimes.