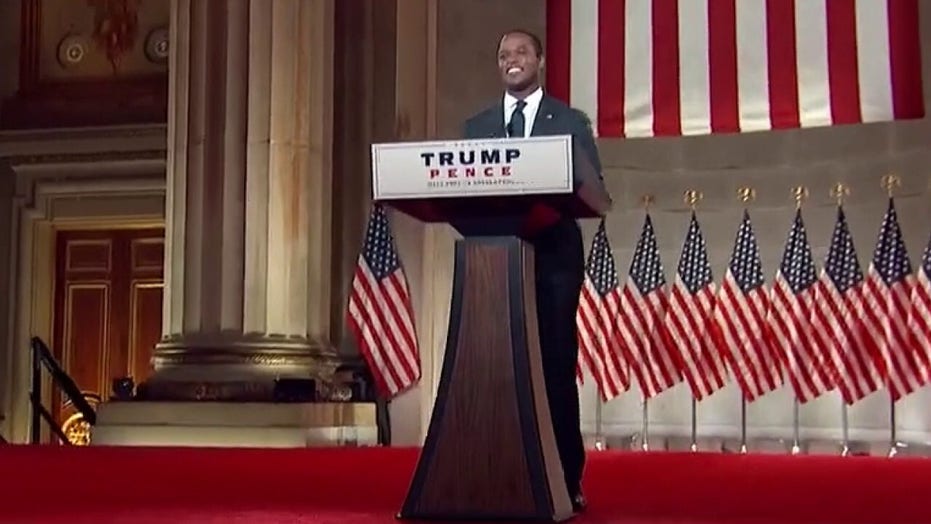 Kentucky Attorney General Daniel Cameron ripped Joe Biden as a “backwards thinker” whose record is a "trail of discredited ideas and offensive statements” during a speech to the Republican National Convention on Tuesday night.

Cameron said he took offense to Biden saying “you ain’t Black” to those who are deciding whether to vote for him or President Trump; and to Biden saying Republicans would “put y’all back in chains,” referring to his 2012 remarks about Sen. Mitt Romney’s tax plan.

“Mr. Vice President look at me, I am Black, we are not all the same sir, I am not in chains, my mind is my own and you can't tell me how to vote because of the color of my skin,” Cameron said.

“Joe Biden is a backwards thinker in a world craving forward-looking leadership,” said Cameron. “There’s no wisdom in his record or plan, just a trail of discredited ideas and offensive statements.”

“And on immigration: Joe Biden promises more to illegal immigrants than he does to you, and President Trump believes his highest duty is to the American worker.”

Cameron, the first Black man to hold the attorney general role in his state, lamented "anarchists mindlessly tearing up American cities." Kentucky has beared the brunt of racial injustice and police brutality protests in recent months as demonstrators demand justice for Breonna Taylor, a 26-year-old Black woman who died in an encounter with police after they issued a no-knock warrant on the wrong house.

Cameron is under pressure from across the country to decide whether three Louisville police officers will face criminal charges for their actions while executing the no-knock search warrant.

“Whether you are the family of Breonna Taylor or of David Dorn,” the attorney general said, “Republicans will never turn a blind eye to unjust acts, but neither will we accept this all-out assault on Western civilization.”

RAND PAUL: VOTE TRUMP IF YOU HATE WAR LIKE I DO

Cameron called the former vice president “captive to the radical left, a movement committed to cancel culture and the destruction of public discourse.”

“That’s my Republican Party, the Party of Lincoln, that believes America is an indispensable nation…an Evergreen Tree, standing tall in a turbulent world.”

“They believe your skin color must dictate your politics. If you fail to conform while exercising your God-given right to speak and think freely, they will cut you down,” the attorney general continued.

In contrast, he called the GOP the “defenders of life and of individual liberty.”

“We carry the mantle of Eisenhower and of Reagan to be a force for good in this world, and one that must always be reckoned with,” Cameron concluded.