Kellyanne and George Conway, shown at a Washington dinner in this Jan. 19, 2017 photo, are publicly at odds over President Trump these days. (AP Photo/Matt Rourke)

James Carville and Mary Matalin have nothing on Kellyanne and George Conway.

While the Ragin’ Cajun and his wife famously backed candidates on opposite sides of the political spectrum in the Clinton-Bush eras, the Conways' political disagreements have reached new levels -- with Mr. Conway repeatedly and publicly undermining Mrs. Conway as she defends President Trump in crisis after crisis.

Marital bliss gave way once again to marital dis on Thursday night, when longtime Trump adviser Kellyanne put up a muscular defense of Trump’s conduct in response to ex-lawyer Michael Cohen's claim that he directed hush-money payments to two women claiming affairs with the president.

“You just like to say ‘the president lies’ so it goes viral,” Conway told CNN’s Chris Cuomo, after saying the payments were not campaign violations as alleged. “He said today he never directed Michael Cohen to break the law -- that’s what the president said today.”

Her spouse, it seemed, was not convinced.

“Given that Trump has repeatedly lied about the Daniels and McDougal payments—and given that he lies about virtually everything else, to the point that his own former personal lawyer described him as a “f****ing liar”—why should we take his word over that of federal prosecutors?” he tweeted.

The article contended that the payments were in fact intended to influence the election, and that Trump could face criminal charges “for conspiring with Cohen to make the payments because the evidence shows the payments were made, at least in part, for campaign purposes.”

The article sought to shoot down arguments made by Trump’s supporters, including Kellyanne, like the claim that the prosecution of former 2008 presidential hopeful John Edwards -- whose campaign finance case over payments made to a mistress ended in a mistrial -- proves Trump’s conduct was not a crime.

“The bad arguments being floated in Trump’s defense are emblematic of a deterioration in respect for the rule of law in this country,” the article stated.

The back-to-back Trump rebukes underscored the remarkable political tensions flaring within one of Washington's most recognizable power couples. George Conway has emerged as one of Trump’s most vocal conservative critics, particularly on Twitter, while Kellyanne has a reputation for being a staunch Trump defender willing to fight for Trump in hostile media spots where others fear to tread. Both are Republicans. 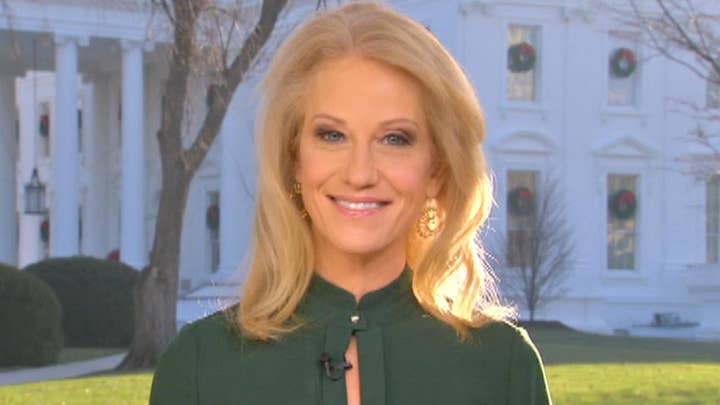 Consequently, the Conway-Conway feud has been something of a fascination among media outlets and led to a lengthy profile in The Washington Post, in which Kellyanne reportedly described her husband's tweets as “disrespectful” and “a violation of basic decency, certainly, if not marital vows.”

She then attempted to attribute the quote to “a person familiar with their relationship” -- a request that was denied by Post writer Ben Terris.

The discord recently picked up the attention of the first family, with Eric Trump tweeting:

"Of all the ugliness in politics, the utter disrespect George Conway shows toward his wife, her career, place of work, and everything she has fought SO hard to achieve, might top them all. @KellyannePolls is great person and frankly his actions are horrible."

George Conway told a Yahoo News podcast last month that the Republican Party has become a "personality cult," and he would rather move to Australia than vote for Trump.

Asked if he thinks the president is fully stable, Conway responded: “No comment.”