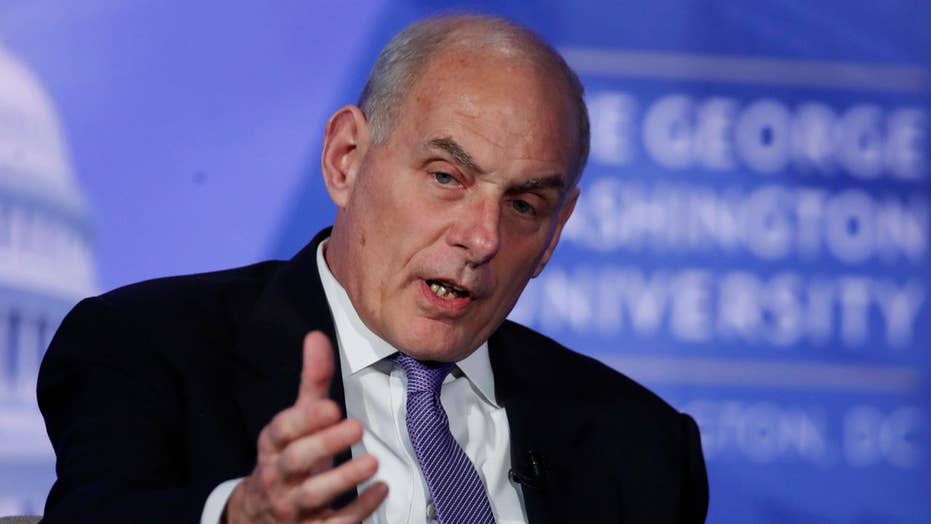 Homeland Security Secretary John Kelly warned Tuesday that the next terror attack could be committed by enemies sneaking through America's southern border, as he defended the tough actions being taken by the Trump administration to secure the region.

“I'm staying up late at night every night to try to prevent that from happening. So that's what keeps me ... awake at night,” Kelly said of the terror threat.

He made the comments during a Q&A session following a speech at George Washington University. In the address, he called the administration’s fight against illegal immigration “really remarkable” and pushed back on criticism from Capitol Hill -- saying lawmakers can either change the law or "shut up."

“The dramatic reduction is evident across the southwest border,” he said. “... These numbers are lower because we've shown that we're serious about border security and enforcing our immigration laws.”

Kelly said while there has been a 70 percent reduction in illegal immigrants in the first 90 days of the young Trump administration, the terror threat from the southern border is still significant.

“I said it a lot back then, and I'm trying to do something about it now, that if there is -- when there is another terrorist attack in our country, if it comes from outside the country, up until 90 days ago, I would say that that individual or individuals … get into the United States through the southwest border,” he said.

He also used the address to blast lawmakers who take shots at Homeland Security staff, whom he said are often mistreated in a way similar to police officers. He added that if lawmakers don’t like what they are doing, then lawmakers should change the laws they are following.

“[Employees] are often ridiculed and insulted by public officials and frequently convicted in the court of public opinion on unfounded allegations testified to by street lawyers and street spokespersons,” he said.

President Trump made clamping down on illegal immigration one of the central planks on his campaign, and has sought to deliver with a number of sweeping moves.

Critics have argued that the agency is too heavy-handed in enforcement operations, including arresting immigrants in the U.S. illegally whose only offense is being in the country without permission.

More than 21,000 immigrants in the U.S. illegally have been arrested since President Donald Trump took office in January, compared to about 16,000 people during the same time last year. About a quarter of those arrests were immigrants who had no criminal history, according to Immigration and Customs Enforcement.

During the Obama administration, ICE agents were told to focus strictly on immigrants convicted of serious crimes or those who otherwise posed a threat to public safety.