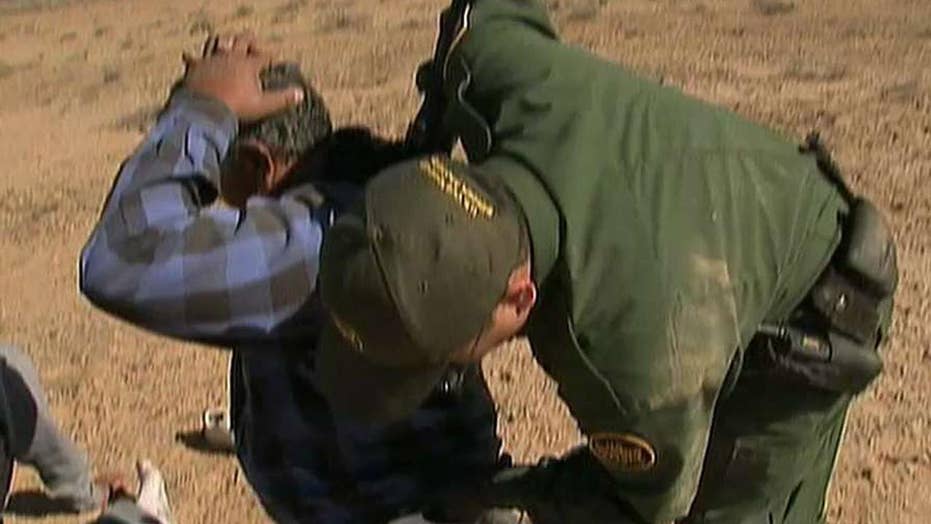 Homeland Security Secretary John Kelly on Wednesday sought to manage expectations for a U.S.-Mexico border wall, while also softening on earlier indications that the administration might separate parents and children caught crossing the southwest border illegally.

Kelly, testifying before the Senate Committee on Homeland Security and Governmental Affairs, said “we’re not going to build a wall where it doesn't make sense” -- but assured that the administration will secure the border with a combination of fences, electronics, towers, and wall structures in areas determined by Customs and Border Protection agents.

“We’re not going to build a wall where it doesn't make sense, but we’ll do something across the southwest border,” Kelly said.

Kelly assured that President Trump has told him to "go do it" and to protect the southwest border in "any way that makes sense."

“President Trump knows that I’m looking at every variation on the theme—the wall makes sense here, high-tech fencing makes sense over here—I have no doubt he’ll tell me to go and do it,” Kelly said. “It’s unlikely that we build a wall from sea to shining sea, but it is very likely that we will put it where men and women think we should put it.”

"'Wall' shall mean a contiguous, physical wall or other similarly secure, contiguous, and impassable physical barrier'."

“Can you interpret a wall as being towers, fences, attempt to detecting tunnels – an electronic wall?” McCain asked. “Could that fit the definition of a wall?”

Kelly responded by saying, “The wall is all of that.”

“We will do something to secure our border, you all know we’re looking at that – but what it will look like, how thick it will be, what color it will be, has yet to be determined, but we do know that physical borders work when they are put in the right places,” Kelly said. “We have to rely on the folks that work the border—the senior agents know the border in their sector better than anyone.”

Kelly was also pressed on separating mothers from their children at the border, but said that they would only be separated "if the child’s life is in danger" or if the mother is an addict.

Sen. Kamala Harris, D-Calif., asked Kelly whether he would put the policy in writing, but he responded saying a "verbal directive" is enough.

According to Kelly’s original testimony provided to Fox News, there has been a sharp decline in apprehensions along the southwest border since the beginning of the year, with March marking the fifth straight month of decline, apprehending 17,000 individuals attempting to enter the U.S. illegally. That’s 71 percent lower than the December 2016 total of 58,478.

In regards to family units (FMUA), this March, Border Patrol apprehended just over 1,100 individuals in a family unit, and approximately 1,000 unaccompanied alien children (UAC), compared to 16,000 FMUA and over 7,000 UAC in December of 2016.

“The movement of human trafficking of people, in general, is down significantly, and young girls are down, in particular, even more significantly,” Kelly said. “That is a result of what we are starting to do at the border.”

Kelly said that the success at the border is due to the "huge amount of cooperation" from Mexicans and local Mexican authorities on both sides of the border, despite the widespread corruption due to trafficking fueled by U.S. drug consumption.