After beginning with a bizarre series of document releases that prompted one top Democrat to compare himself to Thracian gladiator Spartacus, the third day of Supreme Court nominee Brett Kavanaugh's confirmation hearings centered on Special Counsel Robert Mueller's investigation -- and a string of emails from earlier in the nominee's career, more than a decade ago.

As Democrats questioned Kavanaugh, Sen. Cory Booker, D-N.J., on Thursday afternoon released a new batch of documents that appeared to be labeled "committee confidential," meaning they were cleared to be viewed only by the Senate Judiciary Committee, not the public.

Booker tweeted that the entire nominating process was a "sham," and claimed he was running the risk of being expelled from the Senate for breaking its rules by posting the Bush-era documents, which included Kavanaugh's thoughts on racial profiling in the wake of the September 11 terror attacks and his assessment of the Supreme Court's views on Roe v. Wade.

A Judiciary Committee spokesperson confirmed to Fox News late Thursday that at least some of the emails Booker had released were still "committee confidential" when he published them hours earlier, suggesting Booker had in fact violated Senate rules, although Republicans had said earlier in the day that they had cleared many of the documents for public release on Wednesday night.

Also on Thursday, Sen. Kamala Harris, D-Calif. -- another potential 2020 presidential contender -- circled back to a combative, mysterious moment during Wednesday's hearing, when she suggested Kavanaugh was hiding information intentionally.

Harris had asked Kavanaugh whether he ever had discussed Mueller or his Russia probe with anyone at Kasowitz Benson Torres, the nearly 300-member law firm founded by Marc Kasowitz, a former personal attorney to President Trump. Kavanaugh demurred at the time, saying, "I'm not sure I know everyone who works at that law firm."

On Thursday night, Harris offered some more information about the foundation for her line of questioning. 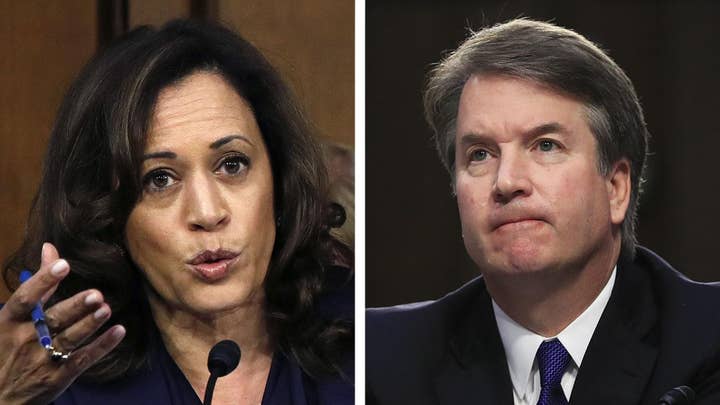 "I received reliable information that you had a conversation about the special counsel or his investigation with the law firm that has represented President Trump," Harris began. "I will ask you again and for the last time -- yes or no, have you ever been part of a conversation with lawyers at the firm Kasowitz Benson Torres about Special Counsel Mueller or his investigation?"

"The answer is no," Kavanaugh eventually replied. Harris moved on quickly, peppering Kavanaugh with an aggressive series of rapid-fire questions on everything from gay marriage rights to separations of illegal immigrant families at the border.

"Your answer was vague," Blumenthal charged. "Have you discussed the special counsel investigation with anyone outside the group of judges on the D.C. Circuit [Court of Appeals]?"

"I've had no inappropriate discussions with anyone," Kavanaugh said. "If you're walking around in America, it's coming up, senator, so people discuss it."

WATCH: KAMALA HARRIS WARNS KAVANAUGH TO 'BE SURE ABOUT YOUR ANSWER' ON MUELLER DISCUSSIONS

Blumenthal's questioning echoed Harris' tone on Wednesday, when she briefly silenced the hearing room by flatly telling Kavanaugh, "I think you're thinking of someone, and you don't want to tell us."

The moment prompted another outburst from demonstrators. In total, 69 protesters were charged with unlawfully demonstrating in the Senate complex on Thursday, including 37 in the hearing room, according to Capitol Police officials. On Wednesday, 73 people were arrested and charged, including 66 from the hearing room.

For the most part, the day's questions focused on documents opaquely referenced by Democrats on Wednesday that Booker and other senators released Thursday.

Democrats pointed, for example, to a 2003 email that had been marked "committee confidential" in which Kavanaugh wrote: "I am not sure that all legal scholars refer to Roe as the settled law of the land at the Supreme Court level since Court can always overrule its precedent, and three current Justices on the Court would do so." 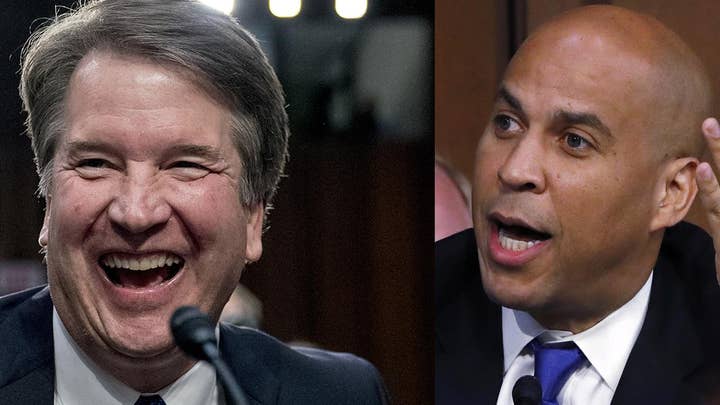 Kavanaugh, then a lawyer in the George W. Bush administration, was being asked for his opinion on a draft op-ed to be bylined by pro-life women. He repeatedly told Democrats that the email reflected only his opinion on the views of "legal scholars," and were not necessarily a fair reflection of his own opinions.

"I am told that he was editing an op-ed for clarity and was merely stating a fact that three judges on the court were anti-Roe,” Collins said. “If that’s the case then, and it’s not expressing his view, then I’m not sure what the point is.” Collins later told Politico she would review the matter again over the weekend.

Democrats also highlighted a 2001 email referenced on Wednesday in which Kavanaugh seemed dismissive of Department of Transportation regulations that gave preference to minority-owned companies, even where they did not offer the most competitive bid on a particular contract.

"The fundamental problem in this case is that these DOT regulations use a lot of legalisms and disguises to mask what in reality is a naked racial set-aside," Kavanaugh wrote, as part of his analysis that conservative members of the Supreme Court would “realize as much in short order and rule accordingly.” Kavanaugh on Thursday defended the email as an assessment of his views on the Supreme Court's probable take on the matter.

Earlier Thursday, Sen. Booker, D-N.J., claimed he was taking a dramatic risk by publicizing emails from 2002 that he had said on Wednesday indicated that Kavanaugh was open to racial profiling.

“I am going to release the email about racial profiling and I understand that the penalty comes with potential ousting from the Senate,” Booker announced, adding later: “This is about the closest I'll probably ever have in my life to an, ‘I am Spartacus’ moment.”

But in a strange twist, Republicans on the Judiciary Committee said that the George W. Bush library and the Justice Department had cleared several of the documents for public release the previous night, suggesting that Booker, in fact, was not risking anything by going public with the documents. Utah Republican Sen. Mike Lee had hinted Wednesday that the documents would come out, saying there was "no reason" to keep them private.

GRASSLEY UNLOADS ON BOOKER: 'CAN I ASK HOW LONG YOU'RE GOING TO SAY THE SAME THING?'

Late Thursday, a Senate Judiciary Committee spokesperson confirmed to Fox News that at least some of the documents Booker released were still "committee confidential" when he released them.

One of the 12-page email chains that Booker ultimately provided showed that, in 2002, Kavanaugh wrote that he "generally" favored racially neutral security measures in the long term. But he acknowledged that administration officials would need to "grapple" with the viability of a potential interim solution that included race as a consideration, suggesting that until race-neutral policies could be effectively implemented, national security concerns in the aftermath of the September 11 attacks could demand another approach.

Another email chain released by Booker later Thursday showed Kavanaugh admitting to "venting" in 2001 about reported changes to a bill providing funding both religious and non-religious drug and alcohol treatment centers.

Despite the tense atmosphere, there were pointed moments of levity. At one point, at the insistence of Sen. Jeff Flake, R-Ariz., Kavanaugh introduced several girls on a softball team he has coached through the years, rattling off their names and grade levels one by one. When he finished, the hearing room, which on dozens of occasions this week played host to loud and hostile anti-Kavanaugh protesters, broke out into applause.

And even though Texas Republican Sen. John Cornyn sparred with Sen. Booker earlier in the day as he appeared to flout Senate rules, the two shared laughs about book recommendations as the hearing concluded at the end of the evening.

Kavanaugh and members of the Judiciary Committee then headed into a private executive session. On Friday at 9:30 a.m., hearings will continue with a series of outside witnesses, including members of the nonpartisan American Bar Association, which recommended Kavanaugh as highly qualified.