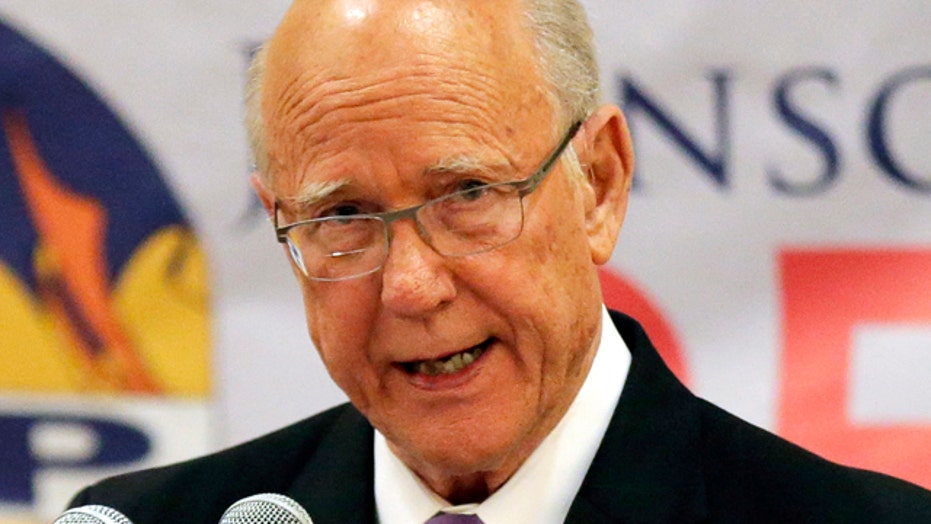 Kansas GOP Sen. Pat Roberts became the latest establishment incumbent to fend off a primary challenge from a Tea Party-backed candidate Tuesday night, as he survived a late charge by Dr. Milton Wolf.

Meanwhile, the Tea Party movement saw mixed results Tuesday, in keeping with what it has done so far this year.

In Roberts' victory speech, he called upon Republicans in Kansas and across the country to unite and defeat Washington Democrats’ liberal march.

“We cannot support a fractured party. The stakes are too high,” Roberts told the crowd. Republicans need to gain six seats in November to take control of the Senate.

“We must be united,” Roberts continued. “We need to take another hill in the fight to stop the liberal agenda. Help us replace the Obama way with the Kansas way.”

The 78-year-old Roberts had to overcome Wolf campaign attacks branding the incumbent as part of the Washington establishment and out of touch with Kansas voters, pointing out Roberts owns a home in the nation's capital while renting in Kansas.

Roberts, a conservative, also had to move even farther right to survive the challenge.

Though he backed the nomination of former Kansas Gov. Kathleen Sebelius to be secretary of Health and Human Services, the three-term senator was among the first to call for her resignation after the disastrous ObamaCare rollout.

Roberts also voted against a U.N. treaty on the rights of the disabled in December 2012 despite the appeals of former Kansas GOP Sen. Bob Dole, who sat in a wheelchair in the well of the Senate.

Wolf, a radiologist and distant cousin of President Obama, cut into Roberts’ 20-point polling lead in the closing weeks of the race, but was also damaged by political attacks, primarily TV ads about him posting gruesome X-ray images on Facebook in 2010.

The 43-year-old Wolf apologized for posting the images, including one of fatal gunshot wounds, and making Facebook comments intended to be humorous. However, his campaign, backed by the Tea Party Express, failed to catch political fire.

Roberts is favored to win the November election in the reliably Republican state. He will face Democratic candidate Chad Taylor, a district attorney from Topeka, and independent candidate Greg Orman, a businessman who has submitted more than twice the number of signatures to qualify for the November ballot.

In the Kansas GOP gubernatorial primary, incumbent Sam Brownback won a closer-than-expected vote against Jennifer Winn, the owner of a Wichita-area property management firm whose platform included support for legalizing marijuana. Both parties' officials had agreed that a single challenge was likely to receive about 20 percent of the vote under any circumstances. With 98 percent of the precincts reporting, Winn had received almost 94,000 votes, just under 37 percent of all ballots cast.

Brownback now will face a tougher-than-expected race from Democratic challenger Paul Davis because of questions about whether massive personal income tax cuts enacted at the governor's urging are boosting the economy, as promised, or wrecking the state's finances.