WICHITA, Kan. – "Remain Red." That is the catchphrase Republicans are touting in Kansas, aiming to ensure a state currently dominated by Republicans stays that way.

Among the most vulnerable seats the GOP is defending is the governor’s chair.

Kelly has gained momentum after securing support from every living former Republican governor in the state except Sam Brownback, who resigned in January to accept an ambassadorship.

“I'm thrilled to have them but not the least bit surprised,” said Kelly. “You know, Kansans are a pretty pragmatic group and, if you look back historically over the past 60 years, half the time we've had Democratic governors.” 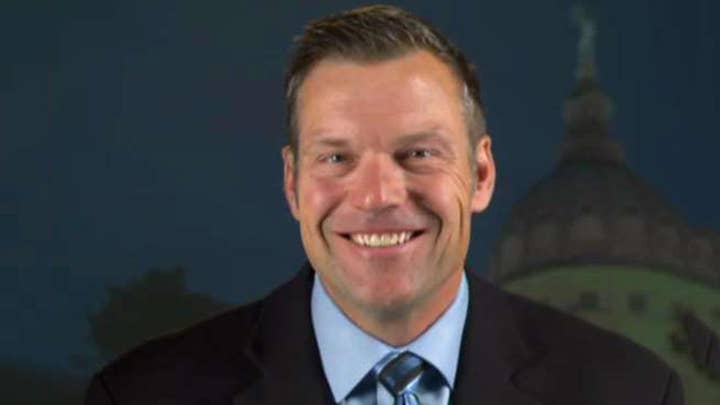 Kobach is backed by President Trump who won Kansas by 20 points in 2016. He welcomed the president in Topeka last month for a rally and has said Trump’s support will help him win.

“It’s definitely a factor. You know, the president is well liked in Kansas. It certainly helped me in the primary and I think it's going to help in the general election too,” Kobach said.

Kobach served as vice chair of the Trump administration's voter-fraud panel before it was disbanded in January, and backs the president on other issues as well.

“To a certain extent, a lot of these gubernatorial races around the country are in some ways a referendum on the president, and particularly in my case, since I and the president share the same views on illegal immigration, on voter fraud, on so many issues,” said Kobach. “I think some people are motivated by that fact.”

Adding to the suspense, a third-party candidate, businessman Greg Orman, running as an independent, could be an influential factor.

“We've had Democrats in charge. We’ve had Republicans in charge. If we want to move the state of Kansas forward we need to do things differently,” Orman said.

Orman is urging voters to have the courage to vote for him.

“We are never going to get the state of Kansas where we want it to be if we vote out of fear,” said Orman. “We have to vote for what we hope for.”

Orman is drawing enough support to make an impact on the contest, although recent polling shows him trailing far behind Kelly and Kobach.