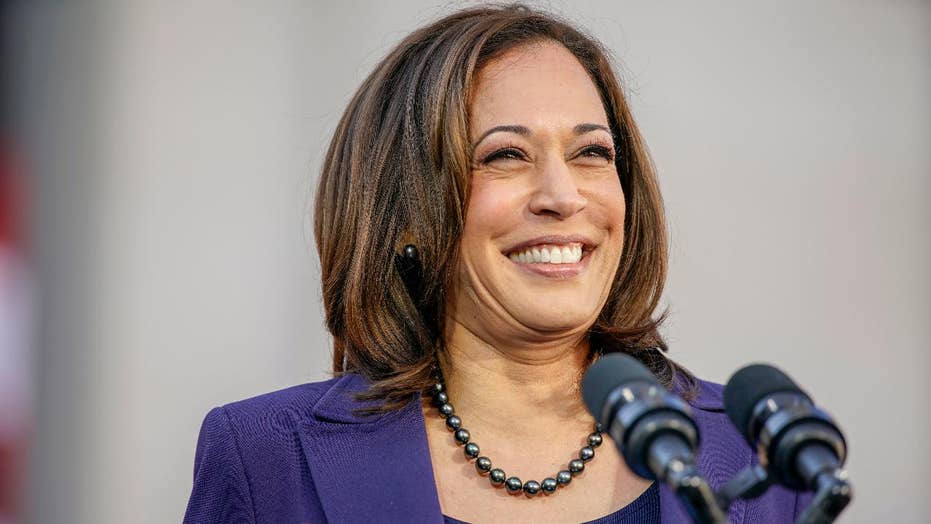 Asked by CNN host Jake Tapper if people who like their current health care insurance could keep it under Harris' "Medicare for All" plan, Harris indicated they could not -- but that, in turn, they would experience health care without any delays.

HOW MUCH WOULD 'MEDICARE FOR ALL' COST?

Her statements appeared to be a full-throated call for single-payer health insurance, as opposed to merely expanding Medicare, and a dramatic embrace of the kind of proposals advocated by Vermont Independent Sen. Bernie Sanders.

President Barack Obama famously repeated several times throughout his presidency, in seeking to promote the Affordable Care Act (known as "ObamaCare"), that "If you like your health care plan, you can keep it."

SF MAYOR SAYS HE HAD AFFAIR WITH HARRIS, HELPED HER CAREER

The fact-checking website Politifact eventually named that statement its "Lie of the Year," noting that several million Americans received cancellation notices from their providers because of ObamaCare. Politifact also said the Obama administration was aware from the outset that its promise was unsustainable.

"Let's eliminate all of that. Let's move on."

Harris appeared unwilling to follow Obama's example on Monday night, and instead stuck to her answer as she jokingly told Tapper to move onto the next question.

During a speech to officially launch her 2020 run earlier this month, Harris declared that "health care is a fundamental right" and vowed to serve her constituents by supporting "Medicare for All."

In August 2017, Harris became the first Senate Democrat to support Sanders' "Medicare for All" bill. The program, if implemented, would cost tens of trillions of dollars over a decade, experts say.

HOW MUCH WOULD 'MEDICARE FOR ALL' COST? EXPERTS BREAK IT DOWN

Several independent studies have specifically estimated that government spending on health care would surge by $25 trillion to $35 trillion or more in a 10-year period. A study released over the summer by the Mercatus Center at George Mason University, for example, estimated that Sanders' program would cost $32.6 trillion — $3.26 trillion per year — over a decade. By comparison, the federal budget proposal for the fiscal year 2019 was $4.4 trillion, the Congressional Budget Office states.

FILE - In this Jan. 16, 2019, photo, Sen. Bernie Sanders, I-Vt., reacts during a hearing on Capitol Hill in Washington. “Medicare-for-all” makes a good first impression, but support plunges when people are asked if they’d pay higher taxes or put up with treatment delays to get it. AP

Analysis by The New York Times in 2017 showed at least 74 million Americans who currently benefit from Medicaid would potentially face higher taxes under "Medicare for All."

But Charles Blahous, a senior strategist at the Mercatus Center and an author of the study, has said Ocasio-Cortez and Sanders would need to make unrealistic assumptions to come to that conclusion, because increased demand for healthcare would potentially offset any such administrative gains.

He criticized the two for making comments that "appear to reflect a misunderstanding of my study" after they cited his work as proof that 'Medicare for All' would, in fact, necessarily save money. Numerous fact-checkers, including The Washington Post and FactCheck, concluded that both liberal politicians had misread the paper's conclusions.

Speaking separately in response to a gun rights question at Monday's town hall, Harris urged a ban on "assault weapons," without defining the term.

Harris also defended her record as attorney general in California, saying she enforced the death penalty in the state despite opposing the practice. Likewise, she said she chose not to take a public position in 2015 on legislation to require her office to investigate all police-related fatal shootings because her office would write the law and enforce it.