Democratic presidential candidate Sen. Kamala Harris called President Trump a liar, accused him of "feeding hate" and pushed the urgent need for new leadership during a speech before thousands of people in Detroit.

The California lawmaker and frequent critic of the president was the keynote speaker at the Detroit NAACP's Fight for Freedom Fund Dinner.

During her wide-ranging speech, Harris tackled a "deeply flawed, infected with bias and in need of reform" criminal justice system, vowed to repeal Trump tax cuts and give families making less than $100,000 a year a $6,000 tax credit, and said if elected, she would make "the largest investment in teachers in our nation's history" by giving most educators a $13,500 raise.

KAMALA HARRIS CLAIMS DEMOCRATS GILLUM, ABRAMS WOULD HAVE WON IN 2018 'WITHOUT VOTER SUPPRESSION'

But the message Harris hammed home the most was the need for honesty in the nation's capital.

"This is a moment in time where we need to speak truth," she said. "Take for example, the United States attorney general who lied to Congress and lied to you, and is clearly more interested in representing the president that the American people. We need leaders who have the courage to speak truth."

Harris is referring to Attorney General Bill Barr who has been accused by Democrats of spinning the Muller-Russia report to favor Trump. Harris made headlines after a tense exchange with Barr last week in which she pressed him on whether he had read Mueller's report before making the decision not to charge Trump with obstruction of justice. She also took him to task over whether Trump had ever pressured Barr to open investigations into specific people. 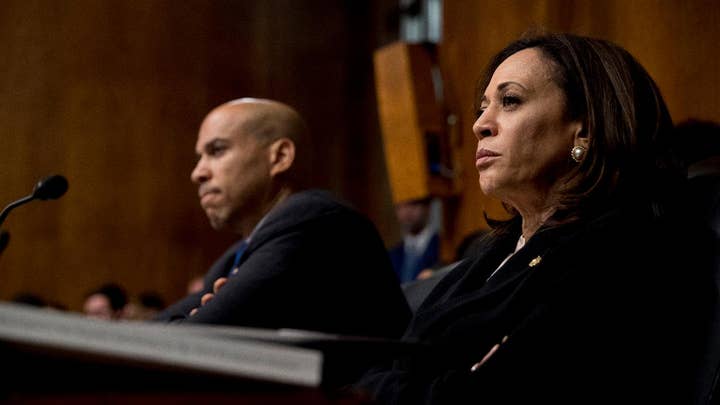 Trump himself weighed in on the exchange during an interview with Fox Business Network's Trish Regan, where he accused Harris of  being "probably very nasty" to Barr.

During her Detroit speech, Harris also defined the recent violent attacks by extremists on synagogues and the burning of black churches in Louisiana as domestic terror acts and warned that the rise of hate groups in America is a threat the Department of Justice needs to take more seriously. If elected, Harris said she would double the size of the DOJ's civil rights division.

“We can’t feed (the hate). I’m telling you, I won’t ignore it. I won’t tolerate it,” Harris, a former prosecutor, said.

Harris, 54, is a first-term U.S. senator. She launched her presidential campaign In January and is a high-profile Democrat in a crowded field of more than 20 in the 2020 race for the White House.