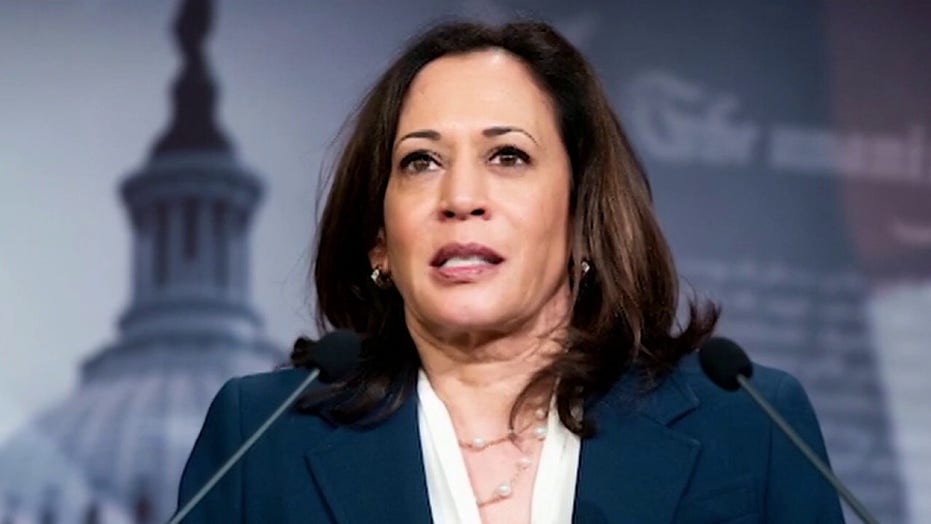 President Trump and his campaign are wasting no time going after Sen. Kamala Harris after her selection as Joe Biden's VP nominee; John Roberts reports from the White House.

Joe Biden’s running mate Kamala Harris scored as the “most liberal” U.S. senator in 2019, according to a GovTrack analysis, outranking Sens. Bernie Sanders and Elizabeth Warren.

According to GovTrack.us, an organization tracking U.S. Congress and information on lawmakers and their voting records, which touts itself as “one of the oldest government transparency websites in the world,” said Harris, D-Calif., was “ranked most liberal compared to All Senators” in 2019.

The group's analysis was based on senators’ “legislative behavior by how similar the pattern of bills and resolutions they cosponsor are to other Members of Congress,” according to its website.

"The score can be interpreted as a conservative-liberal scale, although of course it only takes into account a small aspect of reality," the website stated.

The Trump campaign flagged the rating Wednesday as it pushed back on a description in The New York Times calling her a "pragmatic moderate."

“Reminder: GovTrack ranked Senator Kamala Harris the most liberal member of the U.S. Senate in 2019, farther left than Elizabeth Warren, Ed Markey, and even Bernie Sanders,” the campaign sent in an email. “Kamala Harris is a radical left-wing liberal, despite what the New York Times may say.”

Former Vice President Joe Biden announced Harris as his running mate on Tuesday evening in an email to supporters, saying Harris "is the best person to help me take this fight to Donald Trump and Mike Pence and then to lead this nation starting in January 2021."

He added: "Back when Kamala was Attorney General, she worked closely with Beau [Biden]. I watched as they took on the big banks, lifted up working people, and protected women and kids from abuse. I was proud then, and I'm proud now to have her as my partner in this campaign.”

Meanwhile, Republican National Committee Chairwoman Ronna McDaniel blasted Biden's pick, saying he "didn’t just select a vice-presidential candidate, he chose the person who would actually be in charge the next four years if he is somehow able to win.”

"Kamala Harris’ extreme positions, from raising taxes to abolishing private health insurance to comparing law enforcement officials to the KKK, show that the left-wing mob is controlling Biden’s candidacy, just like they would control him as president," she continued. "These radical policies might be popular among liberals, but they are well outside the mainstream for most Americans.”

The RNC also said Harris should expect "an unprecedented level of scrutiny and attention," claiming she will "be seen as the president-in-waiting."