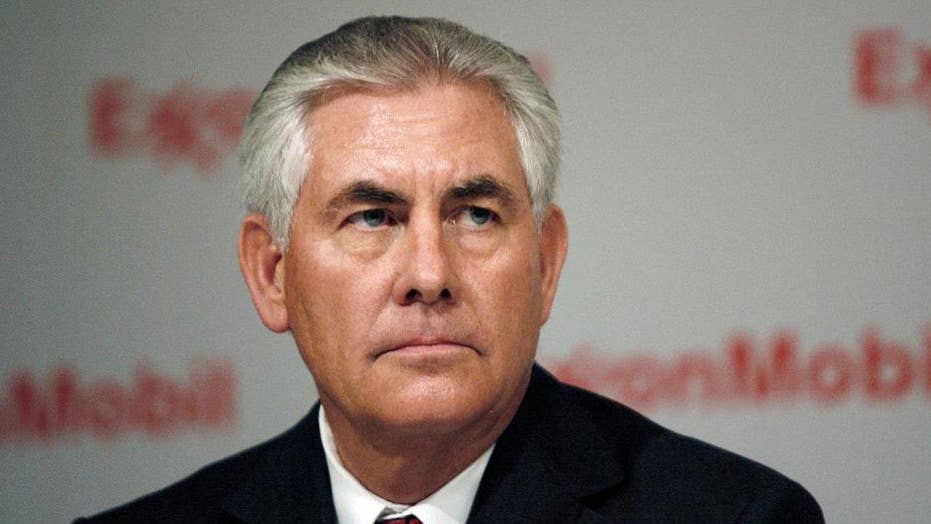 The president-elect continues to fill his Cabinet as questions persist about his secretary of state selection; John Roberts reports for 'Special Report'

It was the spring of 2005. And the late Sen. George Voinovich, R-Ohio, implored his colleagues to reject the nomination of John Bolton to serve as President George W. Bush’s ambassador to the United Nations.

“Many of my colleagues are not going to understand that his appointment is very, very important to our country,” said Voinovich, choking back tears. “At a strategic time when we need friends all over the world, we need somebody up there that’s going to be able to get the job done.”

Voinovich toyed with a yellow marker as he tried to regain his composure.

“I don’t want to take the risk,” said Voinovich, his voice quivering. “I came back here and ran for a second term because I’m worried about my kids and my grandkids.”

Senators of the president’s party rarely oppose his key nominations. But that’s what happened when Voinovich wavered on a vote in the Senate Foreign Relations Committee and ultimately sidelined Bolton’s nomination. The panel was poised to vote on the nomination and send Bolton along to the full Senate for confirmation.

Voinovich’s contemporaneous opposition to Bolton in committee was enough. The panel halted its planned vote to send Bolton’s nomination directly to the Senate floor for confirmation. Republicans held a 10-8 advantage over Democrats on the committee. When they did vote, Voinovich’s defection deadlocked the tally at 9-9. The panel advanced the nomination to the floor, but took the unusual move of doing so without fully endorsing Bolton.

Hardly a recipe for easy confirmation.

Still, Voinovich’s opposition prompted weeks of inquiries into how Bolton comported himself with colleagues while working in the foreign policy community and at the U.S. Agency for International Development.

Democrats saw an opportunity to go for the jugular.

In those days, high-level nominations required a 60-vote procedural threshold to halt debate. The GOP-controlled Senate tried twice to send Bolton to a final confirmation vote. But Bolton could only hit 55 yeas on each of the procedural roll calls.

Fifty-five votes was enough for confirmation. But not enough to break the filibuster.

Bolton’s nomination was dead in the water.

But when Congress adjourned for the month-long August recess, President Bush sidestepped the confirmation process for Bolton. The Constitution provides presidents the option to install figures in administration posts without the Senate’s “advice and consent” so long as the body is “adjourned.”

Recess appointments only last until the end of the next session of Congress. Bolton went on to serve as the U.S.’s representative to the United Nations, sans Senate confirmation. Months later, Voinovich came around and said Bolton had demonstrated an ability to work "multilaterally."

So why bring this up?

Voinovich’s initial opposition to Bolton torpedoed an important administration nominee. And those who follow Senate history know the Voinovich-Bolton template could offer a glimpse into the confirmation process awaiting President-elect Trump’s nomination of Rex Tillerson to serve as secretary of State.

Sens. John McCain, R-Ariz., Marco Rubio, R-Fla., Lindsey Graham, R-S.C., and Rand Paul, R-Ky., all expressed concerns about Tillerson’s business interests in Russia through ExxonMobil. The “Russia” question only looms larger now that there are serious questions about the level of interference in the election by Moscow.

Tillerson may only need a simple majority after Democrats changed the rules, but that doesn’t automatically mean a nomination is on a glide path to confirmation.

Republicans will hold a narrow, 52-48 advantage in the Senate come January. That means if Democrats stick together and vote nay, Republicans can only lose one of their own to confirm Tillerson. The GOP can lose two on their side if Vice President-elect Pence breaks a tie.

A number of Democrats raised serious questions about Tillerson’s nomination. Sen. Chris Coons, D-Del., a member of the Foreign Relations Committee, is among them. But in a recent meeting with reporters, Coons also worried about the potential number two at State under Tillerson.

“I’m equally concerned by rumors John Bolton may be nominated to be deputy secretary of State,” said Coons.

What happens if Tillerson’s nomination does implode? One school of thought now rattling around Capitol Hill is that Trump might then tap John Bolton for the job.

But that’s just congressional jawboning. First the Senate must deal with Tillerson.

“There will not be unanimous consent from the committee,” said Coons. “I can’t prejudge what the body might do.”

And no one knew what Voinovich, the Foreign Relations Committee or the full Senate planned to do on Bolton’s nomination more than 11 years ago, either.