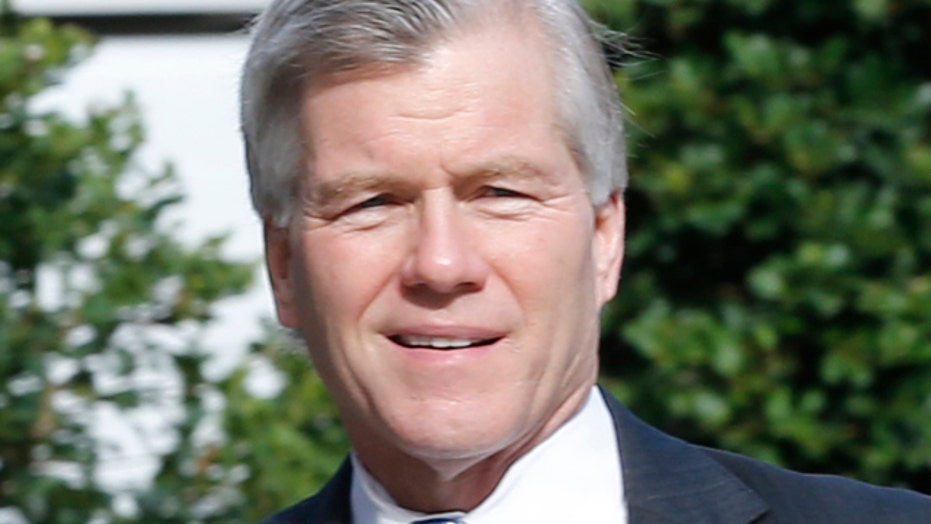 Defense expected to focus on marriage in McDonnell trial

Former Virginia Gov. Bob McDonnell spent a second day on the stand Thursday painting an unflattering picture of his wife as he tried to distance himself from her actions at his corruption trial in Richmond, saying she regularly yelled at staff and acted inappropriately.

The former governor said he grew so weary of her yelling that he began taking refuge in his office late at night rather than go home.

"I would hear her on the phone yelling at staff, saying things that were totally inappropriate,” McDonnell said of his wife, Maureen. “I'd say ‘you can't do that. You've got to take care of your staff.’"

He described her office as “just chaos.”

McDonnell testified extensively about his troubled marriage Thursday. He and his wife, Maureen, are charged with accepting more than $165,000 in gifts and loans from former Star Scientific Inc. CEO Jonnie Williams in exchange for promoting his company's dietary supplements.

The McDonnells, though, say their marriage was broken and that they were barely speaking, let alone engaged in a criminal conspiracy.

In court Thursday afternoon, the defense described a marriage in crisis, showing an email from McDonnell to his wife in which he said, "You are my soulmate. ...I am sorry for all the times I have not been there for you and have done things to hurt you. ... But I am completely at a loss as to how to handle the fiery anger and hate from you that has become more and more frequent."

McDonnell choked up at various times, speaking in a melancholy tone and taking long pauses before answering questions from his lawyer.

He also discussed the family’s finances, claiming he warned his wife not to spend so much.

"I would say Maureen, ‘I don't think you ought to be spending this much money it's too much,’” he said. “I had said ‘you can't spend like this, you've got to cut it back.’"

He said he learned while preparing for the trial that she had been in contact with Williams four different times that day.

At first, he thought they shared a natural bond over dietary supplements -- Maureen McDonnell had sold nutritional supplement for decades as a part-time business. She was crushed when he told her it would be inappropriate to continue selling vitamins as first lady, he said.

McDonnell testified that he doesn't believe his wife had an affair with Williams, but that they had developed an intense, emotional connection to which he had been oblivious.

The former governor's lawyers have argued McDonnell did nothing more for Williams than he would for any other Virginia businessman.

McDonnell said in April 2011, he told his wife they should start entertaining one or two couples at a time for dinner for the sake of "some sense of normalcy." Maureen suggested inviting Williams and his wife, Celeste.

"We were friendly," he said. "I wouldn't say at that point we were yet friends."

He said his daughter Cailin dropped by, and the topic of her upcoming wedding came up. A couple of weeks later, McDonnell said he learned Williams wanted to give Cailin a wedding gift -- $15,000 to cover catering costs.

"I had to think about it," McDonnell said. Ultimately, he concluded that it was a gift to his daughter, so it was OK.

The check is one of the gifts prosecutors said the McDonnells received and failed to disclose. According to previous testimony and evidence, Bob McDonnell had signed the catering contract and made two payments, and a refund check from the catering company was made out to Maureen McDonnell.

Testimony resumes Friday with McDonnell on the stand.