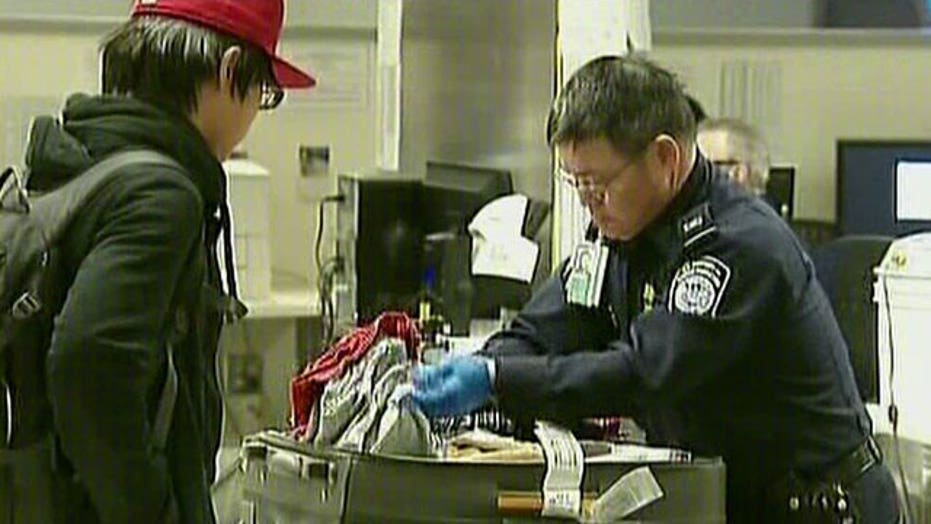 A federal judge who endorsed "suspicion-less" searches of laptops, cameras and cell phones at the border has set up a possible Supreme Court showdown challenging what critics call “Constitution-free zones” and the Obama administration's dragnet approach to national security.

A decision by Judge Edward Korman upholding the federal government's right to search travelers' electronic devices at or near the border conflicts with a similar ruling in California. That ruling requires a "reasonable suspicion" of criminal activity before agents can confiscate and examine personal photos, laptops and files. Korman's ruling does not.

"I think Americans are justifiably becoming increasingly surprised and even outraged by the extent to which the national security state seems to be monitoring and collecting information about us all," said ACLU Attorney Catherine Crump. "We think that having a purely suspicion-less policy is wrong, because it leaves border agents with no standards at all to follow. That opens the door that people will be [targeted] for inappropriate reasons."

The ACLU originally challenged the administration's policy, which can be applied anywhere within 100 miles of the border, after U.S. Customs agents stopped student Pascal Abidor on a train traveling from Canada to New York. After noticing Abidor had two passports -- not uncommon for journalists and those with dual citizenship -- agents asked to see his laptop. Since Abidor was a student of Middle Eastern affairs, his computer contained photos of political rallies held by Hamas and Hezbollah, known terrorist groups.

"I explained to the immigration officer that the reason I had these photos was this was my research," said Abidor, a U.S. citizen. "I determined they looked at my personal photos and personal chats with my girlfriend. I knew I needed help."

The ACLU sued, claiming the broad expansion of search powers under President Obama posed a danger to the lives of ordinary Americans -- especially since the administration claims it has the right to inspect items not just at ports of entry, but checkpoints hundreds of miles away. The ACLU calls these "Constitution-free zones."

"The administration's rationale is you can never be too careful, that people do bring contraband across the border and it needs to be detected. We think that policy is really problematic because of the sensitive and private nature of the materials people have on their laptops and phones these days and we want to try to put an end to this suspicion-less search policy," Crump said.

But the ACLU lost. Korman, a Reagan appointee, said electronic searches by U.S. Customs and Border Protection are conducted fewer than 15 times a day and do not constitute an undue burden or risk to travelers.

"The Supreme Court has consistently held that border officers can search without any level of suspicion for routine border searches," said Seth Stodder, a former director of policy at CBP.

"It's a textbook application of an old law that says anything you have coming across the border is subject to search -- whether it's mail, a cargo container or laptop."

But in March, a panel of three judges in the 9th Circuit Court of Appeals in California said the government needs "reasonable suspicion" to search a traveler's personal electronic device. When two federal courts interpret a law differently, the U.S. Supreme Court often resolves the conflict.

"I think the Supreme Court is ultimately going to have to weigh in on it," said Stoddard, now a professor of Law at the University of California. "What the courts and the political authorities need to find is the right balance between security and respecting privacy and civil liberties."

The ACLU said it is considering an appeal of Abidor's case.