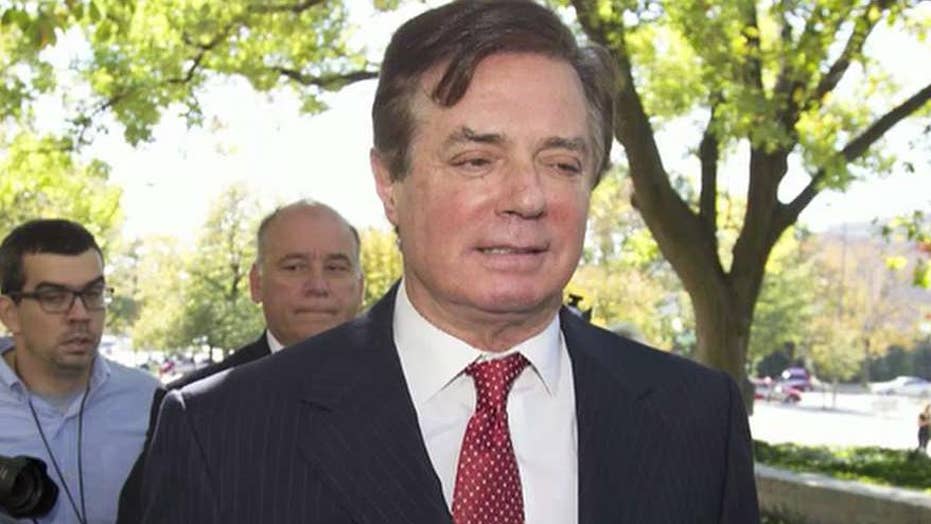 Judge proposes May 7, 2018 for start of Manafort trial

A federal judge on Tuesday eased the terms of former Trump campaign manager Paul Manafort's house arrest so he can travel during the Thanksgiving holiday -- with the caveat he will not drink alcohol or remove his GPS ankle monitor.

The judge also eased the house-arrest terms for Rick Gates, the other Trump campaign official charged last month in connection with special counsel Robert Mueller’s investigation into whether anybody on President Trump’s 2016 White House team colluded with Russia.

Manafort and Rick Gates were charged Oct. 30 in a 12-count indictment related to money laundering, banking and foreign lobbying laws.

Each has pleaded not guilty and remains free on bail, though under house arrest. Their trial date is tentatively set for May 7.

Manafort and Gates’ “limited purpose” release also states they can visit only family. And they must give the court the names and addresses of those they are visiting and the exact times they’ll be at relatives’ homes -- in addition to having to wear their GPS devices and refraining from drinking alcoholic beverages.

In Monday’s court proceedings, Jackson also reminded Manafort and Gates’ lawyers that she has yet to receive acceptable filings about what they propose to offer in exchange for their clients’ eventual bond release.

Jackson has ordered that Manafort’s secured bond be $10 million and Gates’ $5 million.

Gates’ lawyers are offering their client’s home, which they say is worth $2.9 million. Jackson says the lawyers’ have yet to provide sufficient proof of the value of the property, which has an outstanding $1.3 million mortgage.