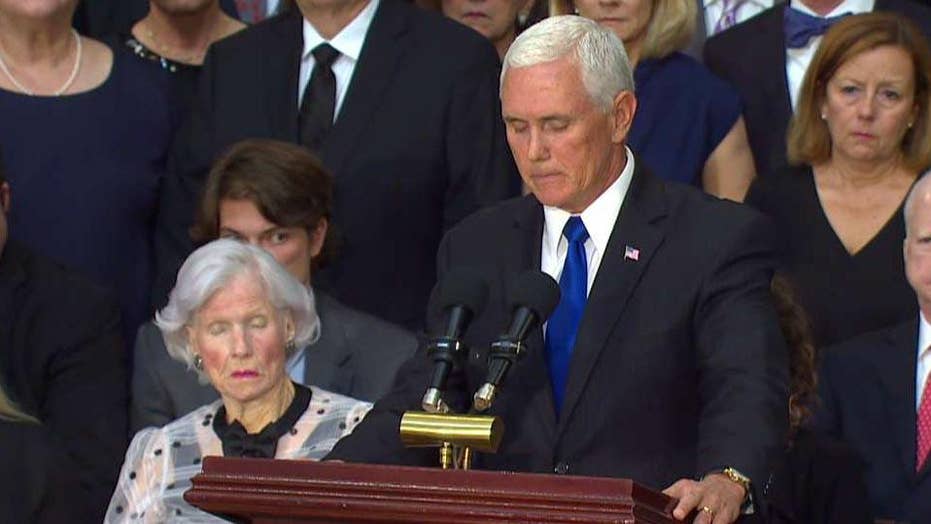 Pence: We will remember McCain served his country honorably

Washington D.C. gathered Friday to pay its respects to “generational leader” John McCain as the veteran senator’s casket arrived to lie in state under the Capitol rotunda -- with political leaders paying tribute to McCain’s service to the country in both the military and in Congress.

With members of McCain’s family in attendance, Pence said Americans “marveled at the iron will of John McCain” and praised him for holding fast “to his faith in America through six decades of service.”

JOHN MCCAIN'S FUNERAL EVENTS: EVERYTHING YOU NEED TO KNOW

“Generations of Americans will continue to marvel at the man who lies before us, the cocky, handsome naval aviator who barely scraped through school, and then fought for freedom in the skies; who witnessed to our highest values, even through terrible torture; and who became a generational leader in the United States Senate, where our nation airs its great debates,” McConnell said. 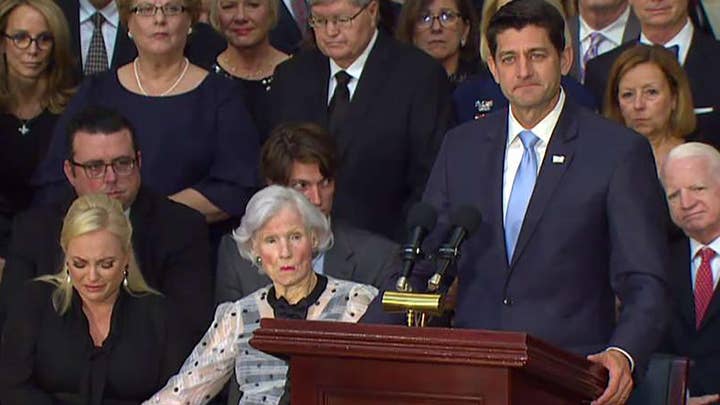 Ryan said that "though the highest office eluded him, he attained what is far more enduring, the abiding affection of his fellow citizens and an example for future generations."

McCain will lie in state throughout the day under the rotunda, where a public visitation will also be held.

MCCAIN'S FUNERAL WILL BE ATTENDED BY OBAMA, BUSH AND OTHERS: A LIST OF NOTABLE PEOPLE PAYING THEIR RESPECTS

On Saturday, McCain’s casket will move to Washington National Cathedral for a funeral service. Presidents Barack Obama and George W. Bush will speak. President Trump, who had publicly feuded with McCain, is not expected to attend.

“John McCain’s impact on America is not over,” Biden said. “It is not hyperbole. It is not over. I don’t think it’s even close.”