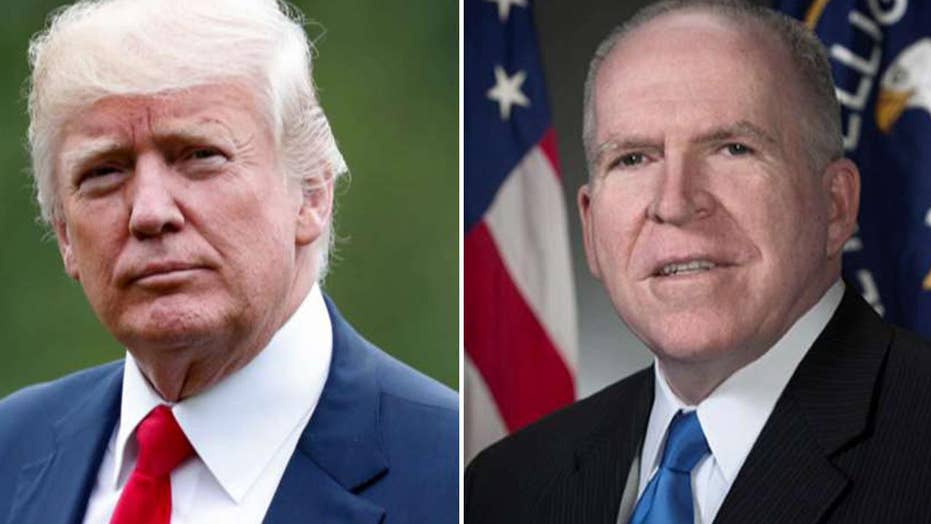 Former CIA Director John Brennan threatening legal action against the president to prevent others from having their clearances pulled; reaction and analysis on 'The Five.'

Former CIA Director John Brennan on Friday escalated his war of words with President Trump -- agreeing with HBO host Bill Maher than Trump’s presidency “is the third great crisis in American history” behind the Revolutionary War and Civil War.

“I think we are in a crisis that is the third great crisis in American history,” Maher said on "Real Time," saying that he felt it was more of a crisis than the Depression but behind the Revolutionary War and Civil War. “Would you rank the crisis we’re in now that way?”

“I would,” Brennan said. “And I think it’s going to get worse before it gets better, because don’t forget: Donald Trump has the authority of the president of the United States in his hands, in terms of what he can do domestically here and as well as what he can do internationally to try to distract attention, whether or not he’s going to try to pursue some type of foreign adventure, military or otherwise.”

Trump yanked Brennan’s security clearance last week, with the White House claiming that Brennan had been “leveraging” the clearance” to make “wild outbursts” about the Trump administration.

Brennan, who joined NBC News and MSNBC in February as a contributor and senior national security and intelligence adviser, has not held back in his criticism of Trump. On his Twitter account, he had called Trump’s behavior at a press conference with Russian President Vladimir Putin in July “nothing short of treasonous.”

On Friday, he defended the remark by saying he thought he had “exhausted all the other adjectives in the English language to describe Donald Trump’s failures to fulfill his responsibilities as president of the United States.

“I saw him on that stage in Helsinki failing to be able to say to the world and to Vladimir Putin that Russia tried to interfere in our election, that it never should have happened and it never should happen again, and if it does Russia is going to pay some very severe consequences as a result, but he didn’t do that,” he said.

He also denied that the basis for the revocation of his clearance was “bogus” and described the politicalization of security clearances as “a real threat to our national security.”

Brennan accused Trump of being “the typical authoritarian who is trying to control power” and said “the walls are closing in on him,” in terms of FBI Special Counsel Robert Mueller’s probe.

Trump has been no less scathing in his remarks about Brennan. Last week he said that Brennan will “go down as easily the WORST in history & since getting out, he has become nothing less than a loudmouth, partisan, political hack who cannot be trusted with the secrets to our country!”

While a number of intelligence officials have backed Brennan, others have criticized him, with retired Adm. Michael Mullen saying that Brennan’s anti-Trump remarks risked damaging the intelligence community.

"I think John's an extraordinary servant of the country, but I think he has been incredibly critical of the president, and I think that has put him in a political place which actually does more damage for the intelligence community -- which is apolitical," Mullen said on “Fox News Sunday.”

"For someone of my age, it brings back the whole concept of the 'enemies list' under President Nixon," Mullen said. "And even before that, in the early 1950s, the McCarthy era -- where the administration starts putting together lists of individuals who don't agree with them."