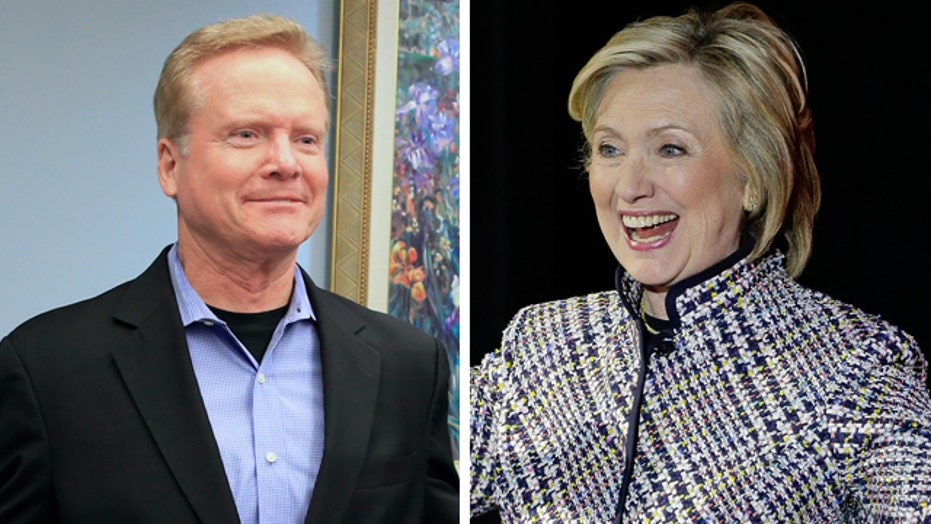 DES MOINES, Iowa – Could Hillary Clinton be worried about former Virginia Sen. Jim Webb? Or is it just coincidence that she has an op-ed piece running in the Des Moines Register on the same day Webb is meeting with Democratic legislators at the Iowa Capitol?

Certainly Clinton has a lead in the Hawkeye State that at present looks insurmountable. But as former Maryland Gov. Martin O’Malley observed recently, he’s seen plenty of candidates who were inevitable right up until the point they were no longer inevitable.

And there is a real sense among many Democrats in Iowa that – at the very least – there needs to be a robust debate among a group of candidates. The last thing they want is a "coronation."

That’s where Jim Webb comes in. He’s in the middle of his second trip to Iowa since announcing the formation of a presidential exploratory committee. On Sunday, he presided over one of those famous Iowa ‘living room’ events with a group of about 40 people that included many veterans. Unlike recent Clinton events, the session – at the home of Dick Goodson -- was a free-flowing question-and-answer session that the press was actually invited to attend.

The group, which included many potential caucus goers, was happy for the chance to hear another Democratic voice.

“The way you really get a good party and a good representation to run for president is by having contested races,” Goodson told Fox News. “That’s what the Republicans are doing. And I think it will serve them well.”

While no one asked Webb about it, the controversies swirling around Hillary Clinton were very much on the minds of these voters. Kristi Lund Lozier said she was “gung ho” for Hillary in 2008, but that it’s time to move on.

“I think she had her chance,” Lozier told Fox News. “I think she’s got a lot of issues that she needs to deal with. I don’t think she is a slam dunk, nor should she be a slam dunk.”

Such sentiments are music to the ears of Webb’s organization. They’re hoping doubts about Clinton will present an opening that Webb – with far less name recognition and cash than Hillary – could walk right through.

Webb himself is careful not to criticize Clinton. When asked by Fox News to comment on her troubles, Webb replied, “I’m just not putting it into the formula. I mean, those are things that they have the capability of responding to, and I’m sure they’ll have their answers. What we’re really trying to do is connect on the issues that we care about and we’ve been working on.”

Webb appeared to connect at the veterans event. “I think he could end up being a very viable alternative to Hillary,” said Jane Brimmer, though Brimmer still hasn’t written off Clinton. She told Fox News that a Clinton-Webb ticket “might be an interesting combination.”

Other voters were indeed looking for an alternative to Hillary. Jim Marren, a Vietnam veteran, says he’s had enough of hearing about Clinton controversies. “I think she kind of feels like she’s an elitist. She can get by with these things,” Marren told Fox News. “It doesn’t ring right to me. You know, it kind of makes me a little leery about how trustworthy is she gonna be as a president?”

Many progressives in the Democratic Party are eager to see a challenge mounted against Clinton. Sen. Elizabeth Warren – their favorite – has so far said she’s not interested. Could Webb be the one? He certainly holds some positions that are to the left of Hillary – economic fairness and an aversion to Wall Street among them. But he also has positions that are to the right of her on the Second Amendment and affirmative action. He’s been described as a "hodgepodge" of political positions, but Webb says he’s fine with that.

“The positions that I take aren’t because of some party platform. They’re thinking through the issues and trying to figure out what is fair and what is right,” Webb told Fox News.

Lynn Hicks, the opinion page editor for the Des Moines Register, thinks Webb could fit right into a sweet spot with Iowa voters looking for an antidote to ‘Clinton fatigue’.

“I think Hillary’s got some baggage,” Hicks told Fox News. “I think whether its emails or other things, I think people are asking questions about that.”

How could Webb possibly battle the financial juggernaut that Clinton is putting together? He admits that’s the biggest problem he faces. But as witnessed with the veterans event, Webb is willing to put in the shoe leather necessary to engage in the sort of retail politics that can make a little money go a long way. Don’t forget, in 2012, Rick Santorum beat a much-better funded Mitt Romney by basically living in Iowa for a year, visiting all 99 counties here at least once.

Webb is also targeting a demographic group that could prove elusive to Clinton – disaffected white working class Democrats who have gravitated to the Republican Party in recent presidential elections. His message of economic fairness is aimed at places like Clay County, Ky. – the poorest county in the nation which is 94 percent white.

“I’ve just been basically been saying – hey – if we’re going to have this message, let’s have it for everyone and the people who left the Democratic Party for various reasons – one of them being Ronald Reagan,” Webb told Fox News.

Is Webb a longshot? To be sure. But Iowa is one of those places where a candidate who is committed to voters can suddenly catch fire. It’s said caucus goers want to see a candidate in person at least four times before they’ll support him or her. If Webb pulls the trigger on a run, he plans to spend a lot of time in the Hawkeye State meeting as many people as he can.

“I’ve seen, you know, a good receptivity of people willing to listen,” Webb told Fox News. “And we’ll just see where that ends up.”