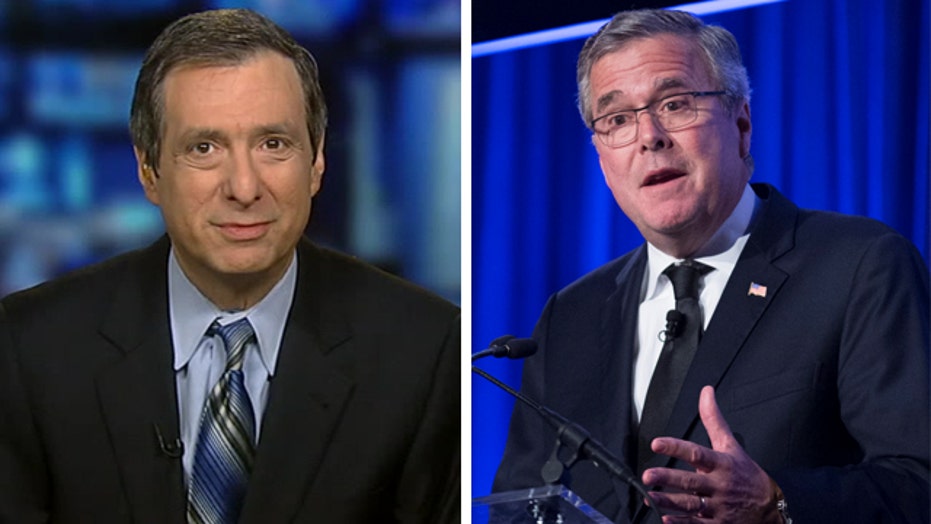 Kurtz: Jeb Bush beat up by his own party

Jeb is the man to beat, the savvy ex-governor, the game-changer with Hispanic voters, the choice of big donors, the common sense voice on immigration and education, the establishment candidate with the best chance of recapturing the White House for the Republicans.

Unfortunately for Bush, it’s mostly liberals who are saying these things. The reaction on the right has been far more mixed, often ranging from hesitation to hostility.

That is the media environment into which the former Florida governor has plunged, where the deepest skepticism toward a third President Bush comes from his own party. If there were many conservatives giddy with excitement over the prospect of a Jeb run, they escaped my notice.

A very different reaction, to be sure, than George W. Bush faced when he threw his Stetson in the ring in 1999. But this is not George W.’s or George H.W.’s Republican Party.

Keep in mind that true-believer pundits often heap abuse on the establishment candidate. Many conservatives openly disdained Mitt Romney during the 2012 primaries, even though they eventually fell into line. Many rebelled against John McCain in the 2008 primaries for his more moderate stances and for daring to work with Democrats.

The mainstream media played up, even touted, Bush’s prospects, as in this Washington Post piece:

“Jeb Bush’s announcement Tuesday that he is actively exploring a 2016 presidential run scrambles the large Republican field, thrusting him to the front of the pack and locking up a huge swath of longtime party fundraisers being wooed by other candidates.”

But while National Review took a wait-and-see stance, one of its writers, Charles Cooke, called Bush “the wrong man, at the wrong time — and in the wrong country, too…

“If Jeb Bush does manage to make it all the way to the top, we will be in uncharted dynastic territory — territory that, frankly, should begin to worry us.

In 2012, a weak President Obama not only managed to draw an astonishing amount of blood simply by riffing on Mitt Romney’s remarkable business career, but, with a little help from Newt Gingrich and Rick Perry, was able to adroitly leverage the still-tender memories of the recent financial collapse and to paint his opponent as a detached, Gilded Age demon. Presumably, Bush would get precisely the same treatment.”

Noting that Jeb had once worked for Lehman Brothers, which was at the heart of the 2008 financial collapse, Cooke said: “Fair or unfair, what exactly do we imagine the story will be if the next Republican candidate is not only vulnerable in this area in his own right, but has the surname ‘Bush’ to boot?”

The royalty argument came up again and again, even though a race against Hillary Clinton would defuse that issue to some degree.

Still, said Red State founder Erick Erickson, “in a year that could field the strongest total crop of Republican candidates in more than a decade, including the present Governors of Wisconsin, Texas, Louisiana, and Indiana and the present Senators from Texas, Kentucky, and Florida, why does Jeb Bush think that he is the man most qualified for the job and, more importantly, why should the nation believe there are no more qualified candidates than a third Bush who will not have run for office in fourteen years by the time we get to 2016?

“Second, does he still consider himself a conservative and, if so, how does he define what that means and how is it different, in his mind, from being generically a Republican?

A more sympathetic conservative, the Daily Caller’s Matt Lewis, cautioned that Jeb “simply cannot lecture the base. Now, Bush can and should acknowledge that he disagrees with some conservatives on some key issues — but it can’t be framed in such a way as to suggest that he is more enlightened and they are rubes. (Yes, good leaders persuade, but he can worry about winning the argument after he’s in the White House. For now, he should worry about winning the election.)

“Having said that, the other side of the coin is that he cannot back down. Most politicians are really good at either indignation (being tough) or compassion (being soft) — but few (the greats like Ronald Reagan) can do both.”

At Hot Air, Allahpundit said all the Jeb skeptics are wrong:

“Conservatives are scoffing on Twitter that Bush is way overhyped and will flame out badly in the primaries. I disagree, and I refer you to the opening line of this post to see why. There are a lot — a lot — of low-information ‘somewhat conservative’ voters who won’t particularly care that Jeb supports Common Core or immigration reform; he’ll have hundreds of millions of dollars behind him to give him a rosy glow on early-state TV sets. He probably can’t win Iowa, especially if Christie or Romney runs and splits the centrist vote with him, but I’m not sure why he can’t win New Hampshire, South Carolina (which just reelected Lindsey Graham, remember), and of course Florida. He’s smart and polished and he’ll have big-name establishmentarians like Rove slobbering all over him in the media for months to come. How many times do we need to see a McCain or Romney nominated before we internalize the reality that yes, Jeb Bush has a decent chance?”

Some on the left are also wondering whether Jeb could be a flash in the pan. In Salon, Heather Digby Parton writes:

“I still cannot help seeing the reflection of another would-be GOP savior in the eyes of Jeb Bush: Fred Thompson. Back in 2008, he was widely assumed by everyone who matters to be the daddy we needed to rescue us from Junior and the crazy Democrats who kept talking about hope and change and breaking glass ceilings and all that other irrelevant stuff. Recall Chris Matthews’ famous comment about the manly Fred:

“‘Can you smell the English leather on this guy, the Aqua Velva, the sort of mature man’s shaving cream, or whatever, you know, after he shaved? Do you smell that sort of–a little bit of cigar smoke?’

“And then recall the fact that for all the excitement about the man who could bring a little of that Reaganesque Hollywood shine back to the GOP, he never really seemed to want it.”

Determination is crucial, of course. And Bush can’t change his last name. Some people are going to be viscerally opposed to another member of the clan in the Oval Office.

But the big question is whether Jeb can sell the party his political ideology. Unlike the Massachusetts moderate Romney, who suddenly pronounced himself “severely conservative,” Bush had made clear he’ll stick to his positions on immigration and education and try to attract skeptical Republicans. And that, as much as his lineage, will probably determine whether we see another Bush-Clinton race.