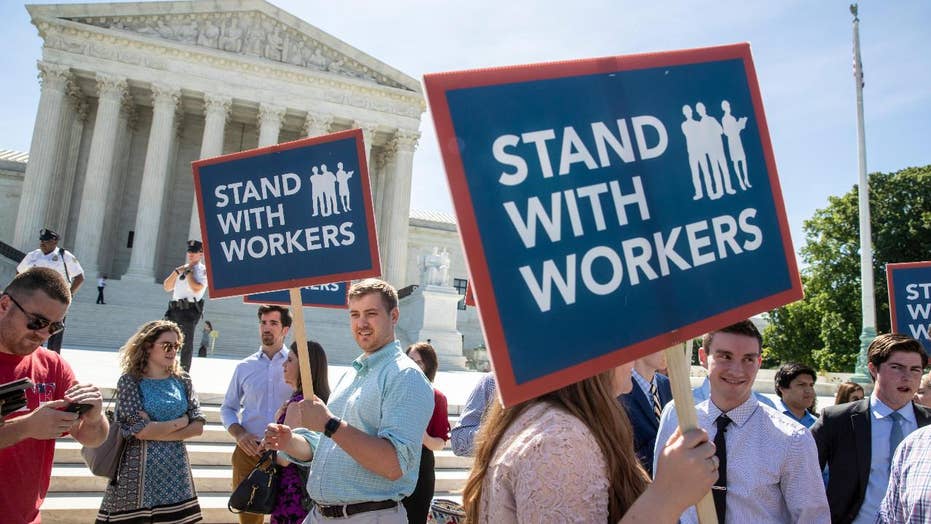 Several Washington state employees are suing for the right to break ties with their union, claiming the Supreme Court's landmark Janus decision should allow them to cancel their membership immediately.

That June ruling said state government workers could not be forced to pay so-called “fair share” fees to support collective bargaining and other union activities. The decision delivered a blow to public-employee unions.

But the lawsuit filed Thursday, if successful, could point to further repercussions.

The six plaintiffs have all attempted to leave the Washington Federation of State Employees (WFSE) since the Supreme Court decision, but say they've been told they have to wait until an “escape period” next year.

The government agency employees signed membership agreements – meaning they were part of a union as opposed to nonmembers forced to pay fees – but the lawsuit said the employees did so when “the right to not fund union advocacy was yet to be recognized.” Before the Supreme Court ruling, Washington was one state where certain public employees were required to pay agency fees.

“I just want what’s right and fair, and the way the union has treated me since the Janus decision is not right, nor fair.”

“Neither an agency fee nor any other payment to the union may be deducted from a nonmember’s wages, nor may any other attempt be made to collect such a payment, unless the employee affirmatively consents to pay,” Justice Samuel Alito said in writing the majority opinion.

The Freedom Foundation, the conservative Washington-based think tank that filed the suit on behalf of the employees, argues union membership cards signed before that decision should now be invalidated because “it’s impossible for a worker to have knowingly waived a right that wasn’t recognized by the court until the Janus ruling was issued.” The workers argue they only joined because they presumed they'd have to pay fees anyway or were given bad information.

The nonprofit also alleges that unions “pressured” employees to join or misled workers to believe membership was required as opposed to just paying the reduced fee.

“I just want what’s right and fair, and the way the union has treated me since the Janus decision is not right, nor fair,” plaintiff Mike Stone, who works in the state’s Department of Social and Health Services, told Fox News. “WFSE doesn’t share my views or my values. I don’t want my money being used to support an organization I disagree with.”

The agreements only allow for a short window (between 10 and 20 days, according to the suit) for employees to resign from the union once a year. Otherwise, deductions will automatically renew annually.

Another plaintiff, who wished only to be identified as Ms. Torres, said she was never told exactly what she was signing and didn’t realize she wasn’t going to be allowed to resign from the union at any time.

“The union organizer simply said if we were already a member we needed to sign their new form,” she told Fox News in a statement. “It’s totally unethical for the union to trick state workers to sign away their constitutional rights and then turn around and tell you that you cannot opt out because you signed a contract.”

“I had no knowledge that the form they provided was a contract. This is an outrage and disrespectful. I want my right to opt out.”

After the Janus decision, the Washington attorney general’s office said the Supreme Court’s ruling “does not impact any agreements between a union and its members to pay union dues, and existing membership cards or other agreements by union members to pay dues should continue to be honored.” It said the decision just prohibits employers from deducting agency fees from nonmembers without affirmative consent.

Washington has some of the highest union membership rates in the U.S., according to the Department of Labor.

“The state and the unions are determined to act as though the Janus ruling affects only those workers who successfully opt out,” James Abernathy, the Freedom Foundation’s senior litigation counsel, said in a statement. “But it goes a lot farther than that.”

“Janus puts the burden of proof on the union to prove a worker actually wants to be a dues-paying member,” he said. “It can’t simply assume they do until informed otherwise, nor can the workers be bullied into waiving rights they don’t realize they have.”

The class-action suit, filed in the U.S. District Court for the Western District of Washington, seeks the restitution of dues since the Janus decision. Aside from WFSE, the lawsuit names Democratic Gov. Jay Inslee and several of the state's departments' directors as defendants.

Neither the governor's office nor the state attorney general's office responded to a request for comment from Fox News by Friday morning.