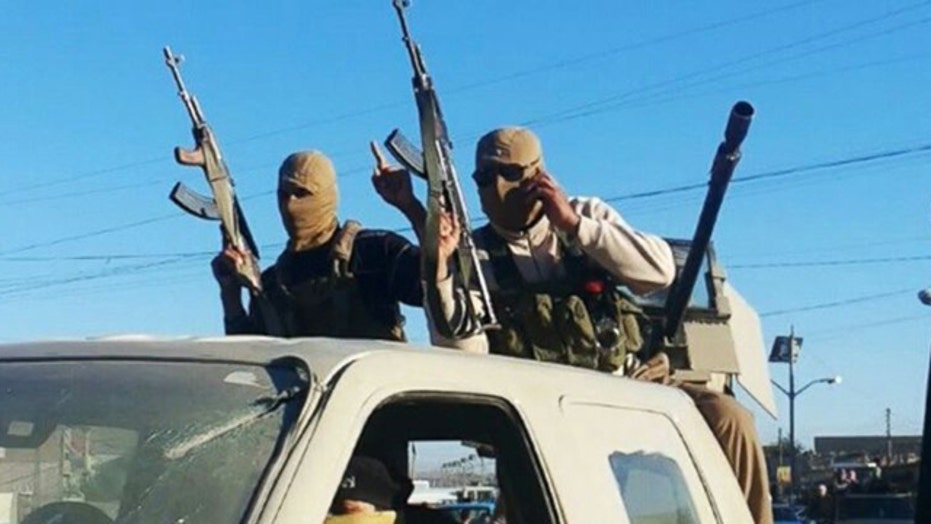 Islamic State fighters reportedly seized most of a western Iraqi town on Thursday, in fighting taking place mere miles from an air base where hundreds of U.S. Marines are training Iraqis.

Reuters, quoting local officials, reported Thursday that ISIS militants had overrun much of the town of al-Baghdadi. One local Iraqi official told Reuters that, "Ninety percent of al-Baghdadi district has fallen under the control of the insurgents."

A Defense Department spokeswoman confirmed to Fox News that “heavy fighting” took place in that area on Thursday, but referred questions about the status of the town to the Iraq government.

“There was no direct attack on the Al Asad air base,” the spokeswoman assured, while acknowledging reports of “ineffective indirect fire in the vicinity of the base.”

Reuters had reported that, according to unnamed officials, a group of insurgents did attack the well-fortified base but failed to break in.

The Al Asad air base is where 320 U.S. Marines are stationed training Iraqi forces. It is a mere 13-minute drive from al-Baghdadi to the base.

But he stressed that for the fighters to pose a threat to the base, they’d have to get through the perimeter. While “it’s not impossible,” Lynch said, to do it they would have to amass a large number of fighters – which would make them “vulnerable” to airstrikes.

The area in Anbar Province has long been a hot zone of fighting as ISIS looks to hold and expand its self-declared caliphate in Iraq and Syria. In January, the Pentagon first confirmed that U.S. troops at the Al Asad base had been coming under regular mortar fire.

To date, those attacks have been described as ineffective. A senior U.S. official told Fox News the base receives “low-scale” indirect fire from time to time.

“We continue to support efforts by Iraqi Security Forces, working in conjunction with tribal fighters, directed against ISIL in the province,” the DOD spokeswoman said Thursday.

According to Reuters, militants attacked the town of al-Baghdadi from two directions before advancing inward.

The development comes as the U.S.-led coalition continues to launch airstrikes against ISIS, with Jordan taking on a greater role following the brutal execution of a captured Jordanian pilot at ISIS’ hands.

Citing the deaths of Mueller and other American captives, President Obama on Wednesday asked Congress to give formal approval to use military force against ISIS. Obama said the group poses a “grave threat” and could threaten the U.S. homeland if left “unchecked.”