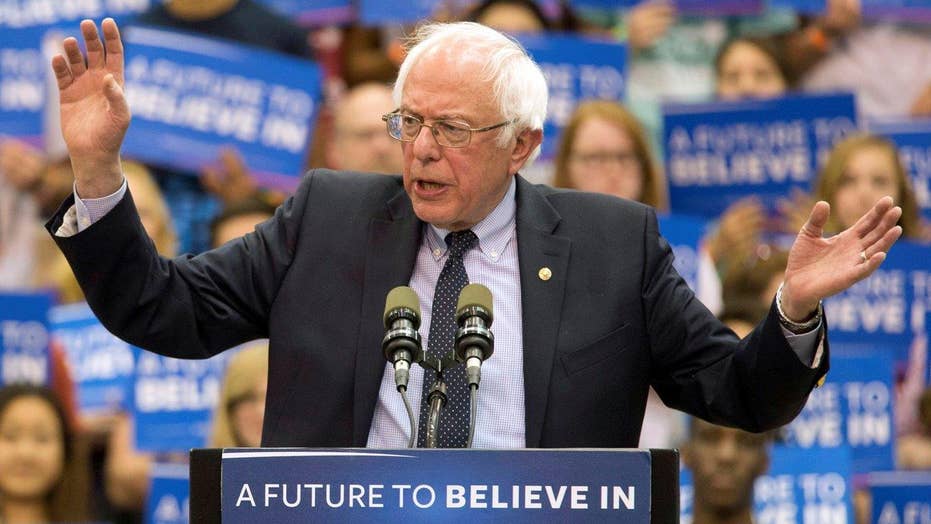 Why Sanders is keeping his voice in the race

Strategy Room: Ellen Ratner and Chip Saltsman say Sanders has the funds and conviction to last until Democratic convention

Hillary Clinton said Thursday she wouldn’t tell Bernie Sanders to drop out of the Democratic primary race, but that’s not stopping her supporters and some liberal groups, who see the Vermont senator’s continued presence as an impediment to Clinton uniting the party.

A New York Times opinion piece on Wednesday declared “Sanders has done all he can do” and even ultra-liberal website Salon.com had a headline the same day blaring “Bernie has run his course.” Privately, Clinton aides gloated and disparaged Sanders anonymously to Politico after Clinton resoundingly won New York’s Tuesday primary, 58-42 percent. But Clinton herself has resisted telling Sanders to step aside.

“That’s up to him,” Clinton said on “Good Morning America” on Thursday. “You know I would never tell anybody what to do. That has to be a very personal decision.”

While Sanders has not been mathematically eliminated from the Democratic primary, his battle going forward isn’t just uphill, it’s up Mount Everest. Sanders needs to win 72 percent of all remaining delegates to secure the 2,383 delegates required to lock up the nomination. Short of that, he’d have to convince the army of superdelegates supporting Clinton to switch their allegiance, which experts view as a tough, if not impossible, proposition. Even some of his advisers have signaled a reckoning is approaching.

“If we get to a position in a week or two where our path to victory with pledged delegates doesn’t look credible, I think we’ll need to stand up and say that in public, and then assess how we can get that lead in delegates,” senior adviser Tad Devine told The New York Times.

So, why press on?

“I think he has essentially done what he got in the race to do, and now is the best time to leave,” said Lara Brown, an associate professor and program director at the Graduate School of Political Management at George Washington University.

“If he continues, he will only further engender frustration among Democratic Party officials and all of those individuals who are engaged at the super delegate level. And what he’s now achieving is really only his own desire to finish, and be in a position where he could protest or engage in some form of minority delegate platform negotiation at the convention.”

Brown told FoxNews.com that the Democratic Party would be better off if Sanders suspended now and “negotiated from a point of graciousness,” particularly because his hardcore army of supporters may not be so eager to quickly abandon their folk hero in favor of an establishment symbol, such as Clinton.

For her part, Clinton said she believes the Sanders supporters will eventually bury the hatchet and support her.

“I know something about this because, as people remember, President Obama and I ran a really tough race for the entire primary season [in 2008] and he ended up with more delegates and I withdrew, I endorsed him and then I got to work,” Clinton said, noting how she worked through the convention to convince delegates to support Obama.

“So, I’m hoping that the same thing will happen this time,” she said.

Brown described Clinton’s eventual embrace of Obama in 2008 as the model for how a party primary ends.

“I think the Democrats hope that [Sanders] will look at 2008 as the model,” Brown said. “And I think [Clinton] did put that out there to say, ‘Sen. Sanders, even if you fight this out to the end, I hope you will be with me in the end.’”