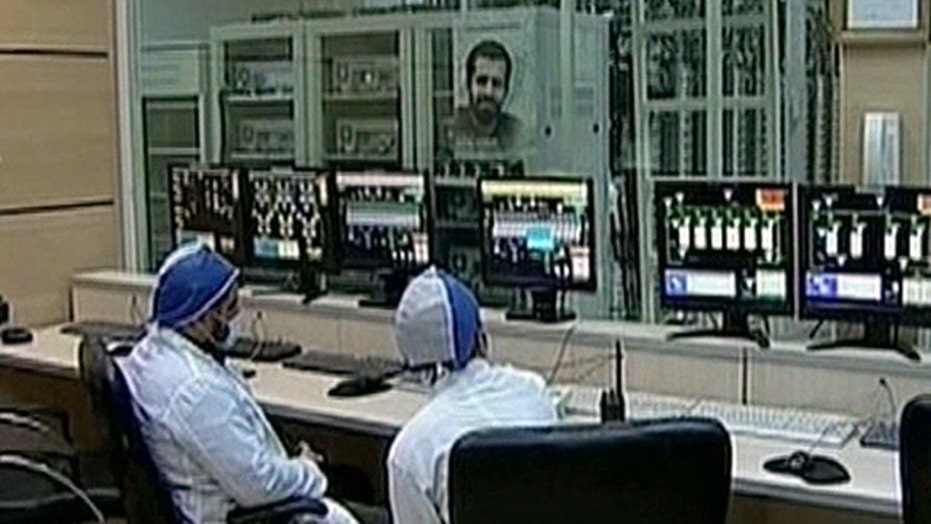 Before he paused to allow reporters to ask questions about the nuclear deal with Iran that he had just announced in Geneva, Secretary of State John Kerry seemed to anticipate one line of criticism about the accord -- that it effectively cedes to the Islamic regime the right to enrich uranium, despite half a dozen U.N. Security Council resolutions declaring the activity illegal. And he moved, preemptively, to address it.

"In 2003, when the Iranians made an offer to the former administration with respect to their nuclear program, there were 164 centrifuges," Kerry said in a news conference held in the early hours of Nov. 24. "That offer was not taken. Subsequently, sanctions came in, and today there are 19,000 centrifuges and growing."

In essence, the secretary of State was suggesting the staggering number of centrifuges that Iran now has effectively forced the hand of the P5+1 negotiators at the talks, making the placement of restrictions on Iran's nuclear program the only realistic prospect the negotiators could pursue. Kerry also suggested that had only President George W. Bush done the right thing a decade ago, the United States and its allies in the P5+1 -- Britain, France, Germany, China and Russia -- wouldn't have found themselves in such a precarious negotiating posture.

Yet a Fox News review of reports by the International Atomic Energy Agency (IAEA) and analyses prepared by leading research institutions -- including the Arms Control Association, the Center for Strategic and International Studies, and the Federation of American Scientists -- shows that the vast majority of Iran's enrichment capability came online during the Obama administration.

It is known that by late 2007, Iran possessed about 3,000 centrifuges. Over the course of Bush's final 12 to 15 months in the White House, it can be assumed safely that Iran added to, but probably did not fully double, the number of centrifuges it had installed. A fair estimate would accordingly place the number of the spinning machines that Iran had on hand at the beginning of 2009 at 5,000.

This would mean that roughly 25 percent of the regime's current total of centrifuges had been installed when the Bush-Cheney era ended. Put another way: Roughly 74 percent of the centrifuges Iran now has on hand were installed since the Obama-Biden team assumed office. Analysts say 10,000 of the total are actively enriching uranium to low levels, inconsistent with nuclear weapons production but well suited to the task should a decision be made to pursue that goal.

Yet in a series of interviews he gave before leaving Geneva, Kerry expanded on his theme, telling ABC News' George Stephanopoulos: "In 2003, Iran made an offer to the Bush administration that they would, in fact, do major things with respect to their program. They had 164 centrifuges. Nobody took that [deal] -- nothing has happened. Therefore, here we are in 2013 -- they have 19,000 centrifuges and they're closer to a weapon. You cannot sit there and pretend that you're just going to get the thing you want while they continue to move towards the program that they've been chasing....You can't always start where you want to wind up."

Kerry's concise history of the Iranian nuclear program, which encompassed only the years 2003 and 2013, naturally omitted quite a lot. Determining exactly when the regime crossed a given technical threshold can be difficult, given the opacity of the government and the complex of commercial, military, and scientific institutions that have contributed to the program over the last two decades. The secretary plans to testify before Congress on Iran, for the first time since the deal was announced, in a House Foreign Affairs Committee hearing on Dec. 10 -- an opportunity to provide more clarity.

A spokesman for Kerry professed ignorance of the exact numbers involved. "We have not questioned the fact that Iran has made progress on enrichment and on developing a nuclear weapon," spokeswoman Jen Psaki told reporters on Dec. 2. "That's one of the reasons why we stepped up sanctions over the past couple of years."

But when confronted with the notion that at least 70 percent of the expansion in Iran's centrifuge program took place on President Obama's watch, Psaki countered: "I think what we're focused on at this point is the fact that we're now at a point where we are halting and rolling back the progress of their program and we're working towards a comprehensive agreement to bring an end to it."