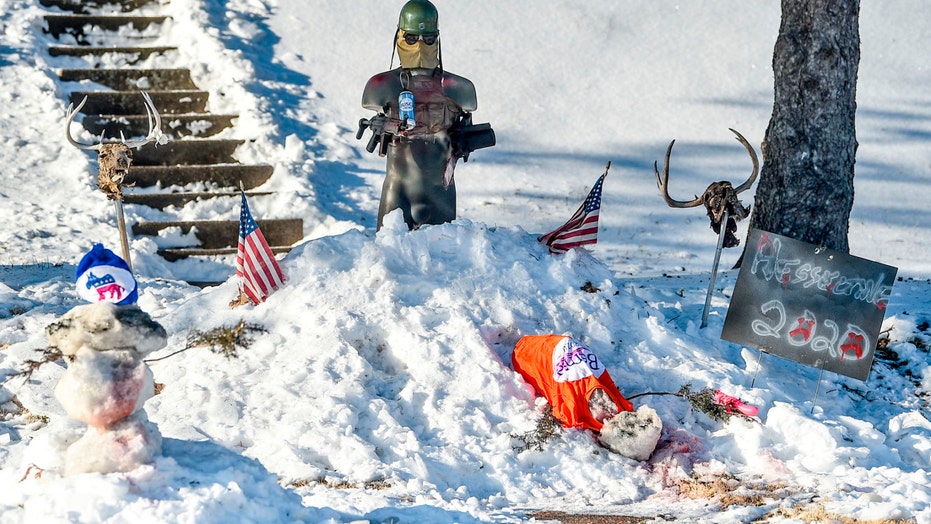 Leaders of an Iowa city have denounced a resident's controversial snow display that depicted a figure appearing to shoot two snowmen, one wearing a Bernie Sanders T-shirt and the other wearing a Democratic Party hat.

Mike Matson, the mayor of Davenport, said he asked the city's police chief to investigate the display, which he called "an embarrassment to our city."

“My personal reaction is that it’s terribly wrong,” Matson told the Quad-City Times. “All hate speech is wrong.”

NEW POLL: BIDEN WITH SLIGHT EDGE IN IOWA WITH CAUCUSES 2 WEEKS OUT

The figure is seen entrenched in a snowbank donning an army helmet and sunglasses while holding an assault rifle, a chain saw, and what appeared to be a beer stuck to it. Reports did not indicate if it was an actual rifle, but it was pointed at the snowman in the Sanders shirt, which has red dye in the snow near its head.

A snow display in the yard of Donald Hesseltine is seen Monday, Jan. 20, 2020, in Davenport, Iowa. Leaders in the city condemned Hesseltine's display, depicting a figure gunning down a snowman wearing a Bernie Sanders shirt and another adorned with a Democratic Party hat. (Meg McLaughlin/Quad City Times via AP)

Homeowner Donald Hesseltine reportedly created the display, which also shows the figure surrounded by two American flags and two deer-like animal heads propped up by posts. On a nearby sign, he said he wrote the words "Hesseltine 2020" with red sad faces inside the zeroes.

Hesseltine laughed off concerns about the display, saying he created it over the weekend to "mess with" friends who support the Democratic presidential candidate.

When asked if the snowman exhibit was created to incite violence, Hesseltine, an Army veteran who served in Afghanistan said, "No way."

Elesha Gayman, chair of the Iowa based Scott County Democrats said the display was "a hate crime and hate speech."

“It’s as bad as if someone burned a cross in someone’s yard,” Gayman said. “We have got to stop this. This is not the Wild West. We should be able to civilly disagree with one another, where you’re not displaying acts of murder on your front lawn.”

Even with Matson's strong feelings towards the display, he added it's likely the city can't do anything about it, because of Hesseltine's free speech rights.

The first votes in the Democratic nomination process will be in two weeks when the Iowa caucuses take place.